In the midst of a long-running legal battle, the state’s new chief minister Eknath Shinde has asked the advocate general to submit its order in the court that the Metro car shed will be built in the Aarey Colony where it was promised in 2019 under the BJP-led government, thus reversing the Maha Vikas Aghadi government’s decision. It has also revived the controversy 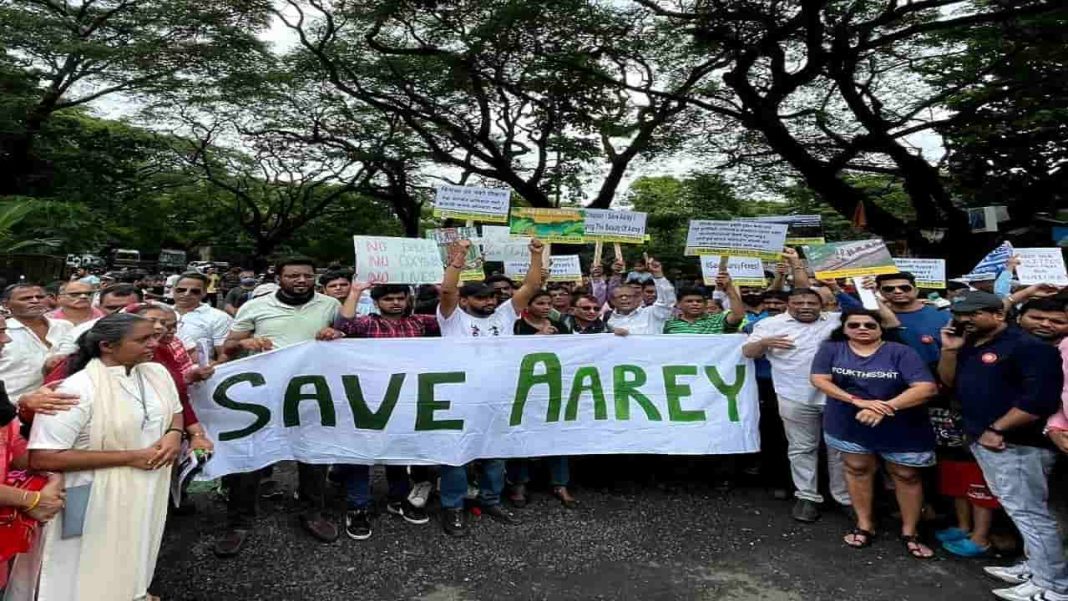 In the first cabinet decision, the newly sworn-in Chief Minister Eknath Shinde and Deputy Chief Minister Devendra Fadnavis of Maharashtra have directed Advocate General Ashutosh Kumbhakoni that the controversial Metro car shed will be shifted back to Mumbai’s Aarey Colony. It is a reversal of the Uddhav Thackeray-led Maha Vikas Aghadi government’s order which had planned to shift the project to a different location after wide­spread protests. Shinde has asked Kumbhakoni to submit its order in the court that the car shed will be built where it was promised in 2019 under the BJP-led government.

The Aarey Colony in the Goregaon region, a suburb of Mumbai city, is often called the “city’s lungs”. It spreads over 13,000 hectares of land and is home to thousands of tribals and Adivasi people, who live in 27 hamlets. Some of its area is part of the Sanjay Gandhi National Park, which is home to a range of flora and fauna.

The Aarey Metro shed tussle began in 2014. The location was identified for the construction of a Metro car shed on 1,800-plus acres of green land. The shed was a part of the 33.5-km underground Metro 3 project connecting Colaba-Bandra-SEEPZ line.

The Bombay High Court in September 2019 verbally directed the Mumbai Metro Rail Corporation Limited (MMRCL) and the state government not to cut any tree in the Aarey forest area for the construction of a Metro car shed, to which they agreed. Later in October 2019, the High Court dismissed all petitions against the proposed cutting down of over 2,500 trees in the Aarey Colony of Mumbai to make way for a Metro car shed.

This led to widespread protest by activists and locals, who came out on the streets protesting under the “Save Aarey” banner. The then BJP-led government invoked Section 144 in Aarey. About 29 protesters were arrested, but were later released on bail following the Supreme Court’s order. The project work was halted as a long drawn out court battle ensued.

After the NCP-Shiv Sena-Congress coalition came to power in 2019, the then chief minister Uddhav Thackeray had announced that the car shed would move out of Aarey to Kanjurmarg, an eastern suburb. This reversed the decision of the previous government and Thackeray said that the car shed will be relocated to a plot of government land for which the government will incur no extra cost. This claim was, however, heavily contested, leading to further controversy.

Soon after taking oath as deputy chief minister, Fadnavis overturned the previous government’s decision to move the Metro shed from Aarey. He said that 25% of the work for the Metro shed had already been completed in Aarey and 75% of the work can be done immediately whereas the construction will take years if it is done at the other proposed location. This has again sparked controversy with activists and political leaders opposing the decision.

Former chief minister Uddhav Thackeray said he was “very upset” and urged the government not to reverse the Metro car shed plan. He reminded the new administration that this would be a direct attack at the heart of Mumbai. “I am very upset. If you are angry with me, then vent out your anger, but don’t stab Mumbai in the heart. I am very upset that the Aarey decision has been overturned. This is not a personal property,” he said.

A large number of environmentalists have rallied and protested against the decision, calling for “Save Aarey”. Political parties like the Aam Aadmi Party and the Shiv Sena, along with many artists, have also protested against this decision. The call for “Aarey Wachawa” has received support from many quarters, including a large number of social organizations and the general public.

Congress workers have held protests in Aarey as the Metro car shed row re-ignites. The Mumbai Regional Congress Committee organized a protest against the state government’s decision of going ahead with the Metro car shed at Aarey. Protesters shouted the slogan: “Desh ka neta kaisa ho, Rahul Gandhi jaisa ho”. “Aarey has been giving oxygen for so many years. Now they want to make a shed in Aarey which will result in the cutting down of so many trees. This place is known as Mini Kashmir. We will not let them cut the trees,” said a Congress worker.

However, actor Sumeet Raghavan has expressed his support for the state government’s decision via his Twitter handle. He shared his opinion by responding to a Tweet posted by a handle called The Voice of Kurla. Sumit wrote: “Listen to a different voice. I myself am from Nehru Nagar, Kurla (East). “And many Mumbaikars, including myself and me, are demanding that this argument be settled. We want @ MumbaiMetro3 to be launched as soon as possible.”

In his first press conference since assuming office as chief minister, Shinde said: “I have worked with Devendra Fadnavis in earlier cabinet. He has an exceptional potential to get work done. Projects like Samruddhi Highway, the Metro and farmers schemes. We will again work together with full zeal for the betterment of people.”

The Maharashtra chief minister further said that Union Home Minister Amit Shah “has assured us support for any developmental work in which the central government has a role”. Shinde also said that the central leadership will soon decide on cabinet expansion and portfolio distribution.

This year, in March 17, the centre had urged the Thackeray government in the state to re-think over its decision to move the Metro car shed from Aarey to Kanjurmarg. In a letter, the Ministry of Housing and Urban Affairs, under secretary Sunil Kumar, said that the Aarey land for the depot was the right choice considering technical issues.

“As the land at Aarey is sufficient to meet the current as well as design life traffic requirement up to the year 2055, it would not be a prudent decision to shift the location of the shed to Kanjurmarg at this stage of the project on this premise particularly when the project is in significantly advanced stage of completion and the combined depot plans will introduce operational and maintenance bottlenecks in the functioning of the network for the entire lifecycle of this high capacity metro line,” the letter said.

Revenge politics is a dangerous game when it affects the well-being of the state.