Constitution Day: It is a big deal, here’s why 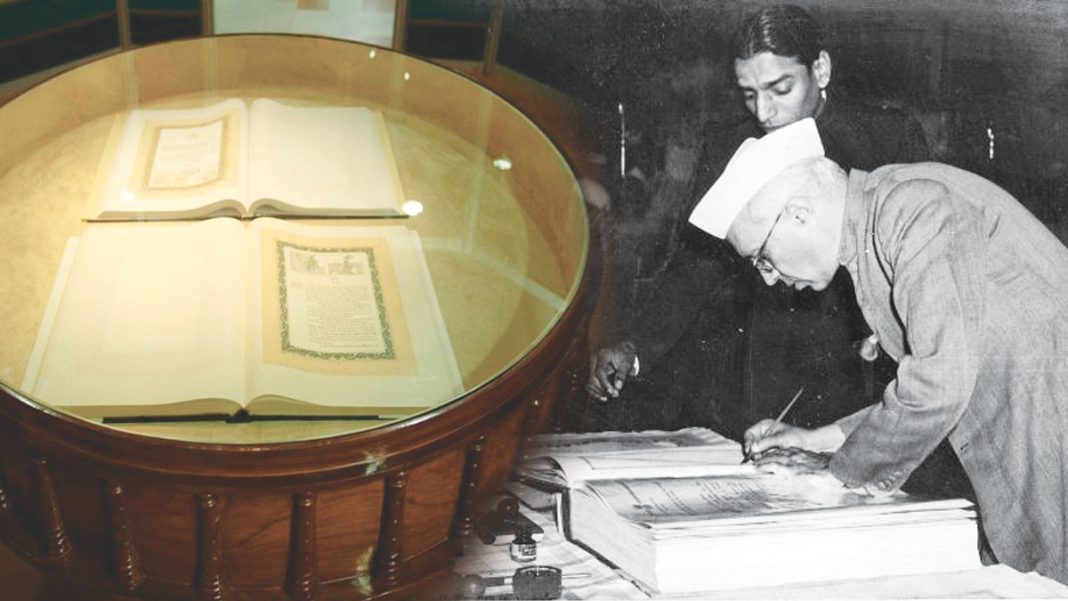 The day, also known as National Law Day, is celebrated in India on November 26 every year to commemorate the adoption of the Constitution of India in November 1949 which came into effect on January 26, 1950.

Lawyers across the country celebrated November 26 as “Law Day” as this was the day on which the people of India gave to themselves the unique document to govern their national life the Constitution of India. This document was beautifully designed to make this country a democratic republic to be governed by the rule of law and to keep it as one huge nation with its matchless theme of unity in diversity. Senior Advocate MN Krishnamani in his speech during his tenure as president of the Supreme Court Bar Association (SCBA) in 2011 reminded all that earlier it was not celebrated as Law Day. It first occurred to the SCBA in 1979, under the leadership of Dr LM Singhvi, to select November 26 to celebrate Law Day. According to Dr Singhvi, the idea behind celebrating Constitution Day as Law Day was:

The object of celebrating this day as Law Day by the legal community is to converge on one single objective that true democracy and the rule of law always go together. It is the rule of law which guards a democratic polity.

This aspect was also indicated by Justice PN Bhagwati while delivering his Law Day address on November 26, 1985. He said: “It is in the fitness of things that on the day on which the Constitution was adopted and enacted we should wish to emphasise and highlight the fundamental role of law in society and remind ourselves of the sublime purpose which law is intended to serve in a Republic governed by Rule of Law.”

The Constitution was drafted under the leadership of Dr BR Ambedkar, who said: “The Constitution can provide only the organs of State such as the Legislature, the Executive and the Judiciary. The factors on which the working of those organs of the state depend are the people and the political parties they will set up as their instruments to carry out their wishes and their politics.” He added: “We must note that our political democracy cannot last unless there lies at the base of it social democracy. What does social democracy mean? It means a way of life which recognises liberty, equality and fraternity as the principles of life.”

The Constituent Assembly took almost three years (two years, eleven months and 17 days, to be precise) to complete its historic task of drafting the Constitution for independent India. During this period, it held 11 sessions covering a total of 165 days. Of these, 114 days were spent on the consideration of the Draft Constitution. Members were chosen by indirect election by the members of the Provincial Legislative Assemblies. The arrangement was: 292 members were elected through the Provincial Legislative Assemblies; 93 members represented the Indian Princely States; and four members represented the Chief Commissioners’ Provinces. The total membership of the Assembly thus was to be 389. However, as a result of the Partition under the Mountbatten Plan of June 3, 1947, a separate Constituent Assembly was set up for Pakistan and representatives of some Provinces ceased to be members of the Assembly. As a result, the membership of the Assembly was reduced to 299.

This Resolution was unanimously adopted by the Constituent Assembly on January 22, 1947. Late in the evening of August 14, 1947, the Assembly met in the Constitution Hall and at the stroke of midnight, took over as the Legislative Assembly of an independent India. On August, 29, 1947, the Constituent Assembly set up a Drafting Committee under the chairmanship of Dr Ambedkar to prepare a draft Constitution for India. While deliberating upon the draft Constitution, the Assembly moved, discussed and disposed of as many as 2,473 amendments out of a total of 7,635 tabled.

As a twin celebration of Law Day, Krishnamani reminded us that the real purpose of celebrating Law Day is to rededicate ourselves to the following cardinal principles which form the solid foundation on which this grand constitutional edifice is erected rule of law, independence of the Judiciary, independence of the legal profession. These three principles are intimately interconnected. The main purpose of an independent Judiciary and an independent Bar is only to ensure that there is rule of law. The main aim of celebrating Law Day, he affirmed, is to ensure and to dedicate ourselves to the rule of law. The purpose of celebrating Law Day is to create awareness and to identify and remove the hurdles in the effective working of the legal and judicial systems. Above all, it is our duty to improve the public image of the legal profession and that of the Judiciary.

Supreme Court judge Justice DY Chandrachud delivered a special lecture to mark the event, saying: “The framers of our Constitution laid down the cornerstones to create a legal and an institutional infrastructure to promote a culture of Constitutionalism and Liberal Democracy and it now falls on each of us to play our part.”

Did you find apk for android? You can find new Free Android Games and apps.
Share
Facebook
Twitter
Pinterest
WhatsApp
Previous articleEven with the court’s backing, a Right to be Forgotten law will be almost impossible to implement
Next articleEnvironment ministry extends expiry date for existing clearances to March 31 next year