Door-to-door Vaccination: Helping the old and the infirm

The Bombay High Court asked the BMC if senior citi­zens and those with disabilities could be inoculated and that it would grant permission even though the centre hadn’t given the nod for it. 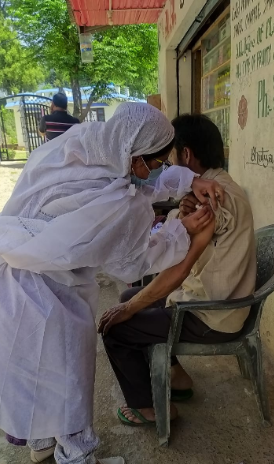 On May 19, 2021, the Bombay High Court asked the Mumbai civic body if it was possible to execute a door-to-door Covid-19 vaccination programme for senior citizens and persons with disabilities who were unable to visit vaccination centres.

A division bench of Chief Justice Dipankar Datta and Justice GS Kulkarni said if the BMC was willing to start door-to-door vaccination for these groups, the Court would grant it permission even though the Union government had not given the nod for such a drive.

The bench said that it seemed that the Union government was not keen on starting such a vaccination programme. “Will you come to the help of elderly citizens? Even though the Centre is not giving green signal (for door-to-door vaccination) we are willing to give you (BMC) green signal,” Chief Justice Datta said. “Will the BMC be able to go to the house of those persons, who cannot step out of their houses, and vaccinate them?” the Court asked.

The Court had earlier asked the Union government to take a relook at its policy that said doorstep vaccination was not possible due to various reasons such as wastage of vaccines and non-availability of observation centres for beneficiaries.

Additional Solicitor General Anil Singh, appearing for the Union government, told the Court that an expert committee had been set up to look into the issue. The committee had a meeting on May 18 and submitted a few suggestions like transporting people who are unable to move out of their houses on stretchers to vaccine centres, Singh said. He added that a standard operating procedure (SoP) would be issued by the government on the issue.

The Court, however, noted that the experts in the committee may be academicians, but they seem to have zero knowledge about ground realities. The bench said there were many places in the country where buildings were situated in narrow lanes and hence, it would not be possible to bring out a person on a stretcher.

Chief Justice Datta gave the example of Kolkata, where he was born and brought up, and said that buildings in that city were situated so close to each other that it would not be possible to take a stretcher there. Justice Kulkarni then said that there were old buildings with wooden staircases even in Mumbai. “There are many households in our country that are situated in narrow by-lanes and elderly citizens and disabled persons living here may not be able to come out. Are you saying that these persons are not entitled to get the vaccine?” the Court asked.

Following these events, on May 21, Goregaon’s Gokuldham Reserve Bank of India Officers Quarters became the first housing society in Mumbai to have doorstep vaccination. Around 400 residents were vaccinated with Covaxin with the help of doctors and staff from Fortis Hospital. On May 22, Golden Willow society in Mulund West became the second society in Mumbai to carry out the vaccination drive under the doorstep scheme. It was done by Fortis Hospital and around 200 residents were vaccinated.

On May 10, the BMC had issued a detailed guideline permitting housing societies and workplaces (private) to tie up with private hospitals/Covid vaccination centres to hold these drives within their premises, subject to the availability of stocks.

A week ahead of BMC’s guidelines, BJP MP from North East Mihir Kotecha and BMC corporator from Mulund Manoj Kotak had written to BMC chief Iqbal Singh Chahal and the state government requesting that door-to-door vaccination be started. The parliamentarian had urged that while the danger of the third wave was still looming over the city, the civic body must frame SoP/ guidelines to start door-to-door vaccination. He also informed that NGOs and organisations had come forward to offer assistance in this regard.

Clerics too urged people to get vaccinated. The Bhamla Foundation took the responsibility to clear misconceptions around vaccination in the Muslim community. A team of clerics and volunteers visited slums in Bandra and Dharavi to convince people to take the jab. After counselling, volunteers register beneficiaries and escort them to the vaccination centre.

Asif Bhamla of Bhamla Foundation said: “We noticed many misconceptions in the Muslim community due to which people were not coming forward. In the holy month Ramzan, people were fasting and hence, they didn’t opt for the vaccine. We roped in clerics hoping that people will listen to them.”

People in J&K were the first to get door-to-door vaccination. Doctors and vaccinators trekked miles every day to administer vaccines to villagers near the LoC. At Baniyar Block in Baramulla district, health officials achieved almost 100 percent vaccination of the first dose for those 45 and above. Most of the villages near the LoC have no access to internet and online registration was not possible. Health officials say this is why they decided to do door-to-door vaccination.

Earlier in the apex court, the centre had ruled out door-to-door vaccination and said it would be done only at identified Covid Vaccination Centres (CVC). It said that the four key requirements of a CVC are: adequate space, cold storage facility, enough vaccinators and medical support staff and adequate arrangements for management of Adverse Event Following Immunisation (AEFI).

The centre said it may be difficult to timely address AEFI at home or at a doorstep, and in case of an adverse event, case management may not be proper and there would be delay in reaching a health facility even though ambulances were stationed nearby. The government said: “It is submitted that maintaining protocol of observation of each and every beneficiary for 30 minutes after vaccination is not possible, as each household may have one or two beneficiaries and it may not be practically possible for the vaccination team to spend more than 30 minutes in each and every household.”

“Furthermore, there are chances of vaccine wastage due to increased time required visiting door to door for socio-economically and underprivileged sections. As per the guidelines, open vial policy is not applicable for COVID-19 vaccine, which means a vial once opened needs to be discarded after 4 hours,” it said.

The government emphasised that vaccination at home may expose the healthcare personnel and frontline health workers to undue pressures from the community to vaccinate those other than on the list and hence, they would need additional security cover as well.