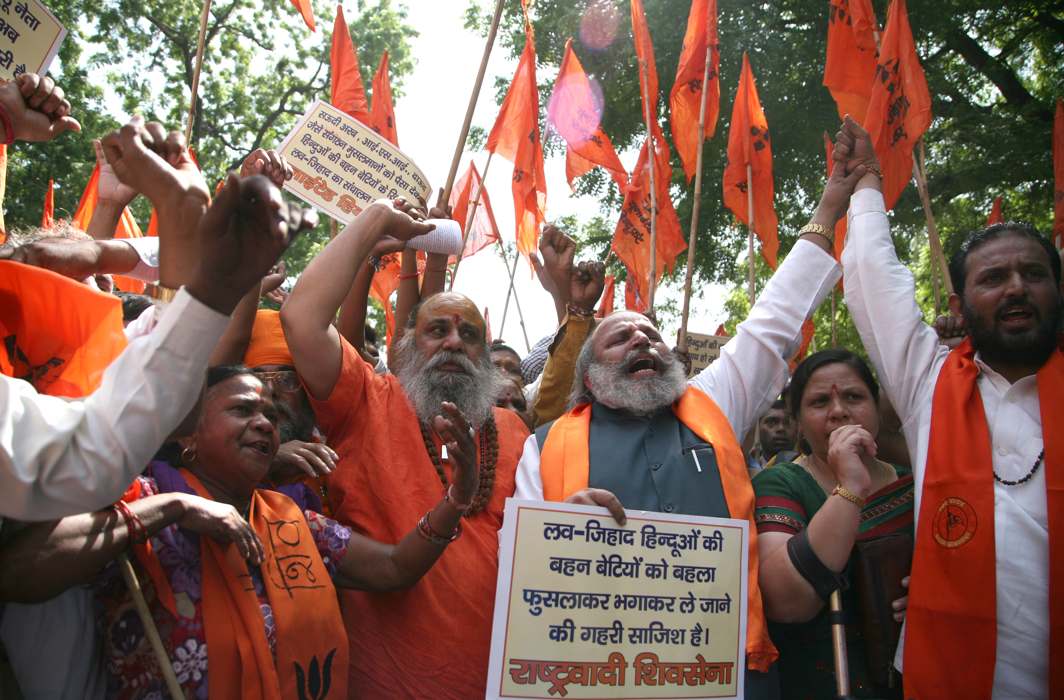 In a far-reaching judgment, the Allahabad High Court has said that cases of religious conversion are irrelevant if both parties are adults and in a consenting relationship. This cannot be infringed upon by the State.

In a significant judgment, the Allahabad High Court has reiterated that a person’s right to live with the person of their choice, irrespective of religion, is intrinsic to their right to life and personal liberty guaranteed by the Constitution.

A bench comprising of Justices Pankaj Naqvi and Vivek Agarwal made the above observations while hearing a petition related to the marriage of a Hindu woman and a Muslim man. An FIR was lodged by the woman’s father alleging offences under Sections 363, 366, 352 and 506 of the IPC (kidnapping, abduction for forcing a woman to marry, etc.) and Sections 7 and 8 of the Protection of Children from Sexual Offences (POCSO) Act.

The Court asserted that the matter of religious conversion was irrelevant if both the parties were adults and in a consenting relationship. The right of two adults to stay together cannot be encroached upon by the state.

It also advocated against State interference in a relationship between two adults, noting:

“We fail to understand that if the law permits two persons even of the same sex to live together peacefully then neither any individual nor a family nor even State can have objection to relationship of two major individuals who out of their own free will are living together.”

Salamat and Priyanka Kharwar married against the will of her family on August 19, 2019, under Muslim customs. Kharwar became Alia after marriage. Her father filed an FIR and alleged that his daughter was seduced and taken away. After the FIR, the POCSO Act was invoked against the accused.

However, after the hearing, the Court gave permission to Kharwar to live with her husband and said the POCSO Act did not apply in this case. It also quashed the FIR lodged against the petitioners. Opposing the petition, it was said on behalf of the state government that conversion for marriage only is prohibited and such a marriage is not recognised in law.

The Court said that it did not see them from the perspective of Hindus or Muslims. Two adults had been living together for the last one year of their own free will and choice and interfering in personal relationships was a serious encroachment on the right to privacy of the person, which he is entitled to under Article 21 of the Constitution.

The Allahabad High Court had earlier in Priyanshi @ Km Shamren and others vs State of UP and Another dismissed a writ petition filed by a married couple seeking a stay on their families interfering in their marriage. The Court observed that the Muslim born woman had converted to Hinduism in June and married as per its rituals in July. This clearly revealed that conversion had taken place only for the purpose of marriage. Ruling that conversion just for the purpose of marriage was unacceptable, the Court said it would not interfere in the matter under Article 226, and dismissed the plea.

In Smt Noor Jahan Begum @ Anjali Mishra and Another vs State of UP and others, the Allahabad High Court had dismissed a batch of writ petitions from couples who had prayed for protection as they had tied the knot after the girls converted from Hinduism to Islam and then performed the nikaah. The Court opined that in each of the cases, the conversion was not bona fide or valid. It noted that the girls did not know about Islam and did not have any “real faith and belief in the unity of God and Mohamed to be prophet”.

However, in the November 11 judgment, the two-judge bench noted that the 2014 and the September verdicts did not lay down the correct law. In the 2014 ruling, the Court asserted that if the alleged conversion was under doubt, a constitutional court was obliged to ascertain the wish and desire of the girls as they were above 18 years.

“We saw that the religious conversions were part of the ‘love jihad’ conspiracy. There is a big conspiracy behind these conversions which was unravelled by our security agencies,” claimed UP minister Mohsin Raza.

Earlier, Justice (R) Aditya Nath Mittal, UP Law Commission chief, said that “love jihad” has a provision to stop illegal conversion. Any religious conversion, done through misrepresentation or any temptation, would be termed illegal and there would be a punishment of three years’ imprisonment. On November 22, BJP national general secretary Kailash Vijayvargiya said a strict law was needed to target inter-faith marriages conducted with the intention or conspiracy of conversion.

In addition, the Himachal Pradesh assembly had last year passed a bill against conversion by force, inducement or through marriages solemnised for the “sole purpose” of adopting a new religion. Madhya Pradesh and Haryana already have such a regulation in place.

The term “love jihad” first drew attention in 2009 after Catholic and Hindu groups in Kerala and Karnataka, respectively, reportedly said women from their communities were being forcibly converted to Islam. Enacted in 1954, the Special Marriage Act was legislated to govern marriages that could not or were not performed according to religious norms.

We live in times when inter-caste and inter-faith marriages have increased with modernisation and development. Not only are they beneficial for a progressive society, but they also promote socio-economic development. The elopement and conversion of Hindu women are associated with Hindu female purity. This is directly linked to Hindu male virility that would reaffirm itself in the public-political domain. It is astonishing that in 2020, a woman is being identified as an exclusive property of the man, and preserving her virtue becomes a legal necessity.

Did you find apk for android? You can find new Free Android Games and apps.
Share
Facebook
Twitter
Pinterest
WhatsApp
Previous articleSC disposes of plea seeking waiver of interest on interest during the loan moratorium period [Read Judgment]
Next articleGovernor signs UP Prohibition of Unlawful Conversion of Religion Ordinance 2020