The Supreme Court had agreed to extend the time limit for the demolition of Noida Supertech twin towers after the demolition company told the Court that the building was sturdier than anticipated. Earlier, the blast was scheduled for May 22. Now, the Noida police has given the go ahead for demolition, but is this the end of the sorry saga? 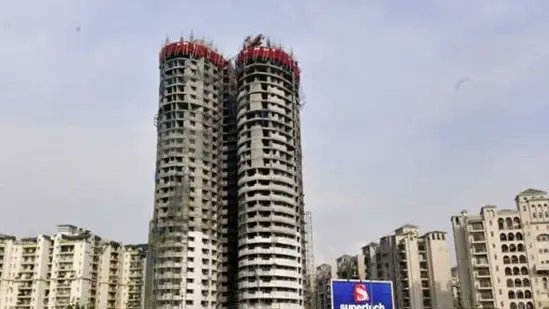 On August 2, the Noida police granted a no-objection certificate (NOC) to Edifice Engineering, the firm responsible for carrying out the demolition of the Supertech twin towers. The demolition of the twin towers Apex and Ceyane located in Sector 93A of Noida is scheduled for 2.30 pm on August 21 with a cushion period of one week.

The Supreme Court directed Supertech builders to immediately release Rs 70 lakh to the Central Building Research Institute (CBRI), which was roped in as a consultant for the structural audit of the company’s 32-storeyed twin towers. A bench, comprising Justices DY Chandrachud and JB Pardiwala, passed the order on July 29 after CBRI backed out from the meeting called by the Noida Authority on July 19, citing non-payment of its fees of Rs 70 lakh. The Court further gave demolition agency Edifice Engineering and Supertech time till August 5 to share all the required data with regard to the safety audit, vibration report, test blast results and clearing of debris. The apex court told the Noida Authority to call a meeting of CBRI, Edifice Engineering and Supertech on August 6, in case of any difficulty. The Roorkee-based company had blamed Edifice Engineering for not providing it with vital details for carrying out the audit. The bench then directed Noida Authority to file a status report before the next date of hearing, on August 12.

The demolition saga began when,by way of an audit conducted by a private agency, the residents found several cracks in the basement of nearby towers, and raised apprehensions that the demolition may impact the safety of other residential towers within the same complex.

On February 7, the Supreme Court had directed that the demolition of the twin towers built by real-estate major Supertech Limited in violation of norms at its Emerald Court project in Noida should start within two weeks. The Court had also directed Supertech to pay refunds to all homebuyers by February 28. Earlier, on January 17, the top court had approved the proposition for the demolition agency finalised by the Noida Authority. Supertech was asked to sign a contract with the agency, Edifice Engineering, within a week. Earlier, the Court had pulled up the builder for not complying with its orders of refunding homebuyers who bought flats in the twin towers in Sector 93 of Noida and warned that its directors will be sent to jail for “playing truant with the court”.

In March this year, the National Company Law Tribunal (NCLT) initiated insolvency proceedings against Supertech Limited for defaulting on payment of loan amount of Rs 431.92 crore to its creditor Union Bank of India. The NCLT admitted the application of Union Bank of India against debtor Supertech Limited, which had not paid its debt since July 2019. Supertech is among India’s leading real estate developers, running its real estate business in the National Capital Region for the past 32 years.

In August 31, 2021, the Supreme Court had directed Supertech to demolish the 40-storey twin towers within three months and ordered to prosecute Noida officials involved in approving maps and building plans in violation of norms. It had also ordered a refund for all home buyers with 12% interest.

The Allahabad High Court had on April 11, 2014, ordered demolition of two towers being illegally developed by private developer, Supertech Limited, on a plot in Noida. The towers, each of which were slated to be 40 storeys high, were being constructed in Sector 93A. The construction at the two towers (T-16 and T-17) is complete till the 21st and 17th storeys.

The Division Bench of Justices VK Shukla and Suneet Kumar directed the developer to bear the cost of demolition. Besides, the developer was asked to refund the buyers’ money, along with 14% compound interest within three months.
Further, the Court directed that the officials of Noida Authority, who gave the sanction for the construction, be identified and prosecuted under the provisions of the Uttar Pradesh Industrial Development Area Act, 1976, and UP Apartments Act, 2010. The High Court order came on a petition filed by Emerald Court Owner Residents Welfare Association. While passing the order, the High Court rejected the developer’s plea that a lot of expenses had been incurred in construction and several people had bought those flats.

Supertech Limited filed a Special Leave Petition under Article 136 of the Constitution on April 28, 2014, against the judgment of the High Court. On May 5, 2014, the Supreme Court ordered the maintenance of status quo in respect of T-16 and T-17, directing that neither the builder nor the purchaser shall alienate the property or create third party rights.

The background to this flurry of legal judgments goes back to November 23, 2004, when the Noida Authority allotted a portion of a plot of land to Supertech for the development of a group housing society. On June 20, 2005, the Authority sanctioned the building plan for the construction of 14 towers under the New Okhla Industrial Development Area Building Regulations and Directions 1986 (NBR 1986).
On June 21, 2006, a supplementary lease deed was executed by the Autho­rity in favour of Supertech for additional land in the same plot granted under the original lease deed. The sanctioned building plan was subsequently revised on December 29, 2006, November 26, 2009 and March 02, 2012, respectively. The first revised plan added Towers 15 and 16 and a shopping complex to the project. Tower 16 was to consist of one building with ground plus 11 floors and three buildings of ground plus 4 floors with a height of 37 metres. In the second revised plan, Tower 17 was added to the project. Under this plan, Towers 16 and 17 were to consist of 24 floors with a height of 73 metres each. Further, Tower 17 was to be at a distance of 9 metres from Tower 1 and there was a provision for their connection through a space frame at the upper level. In the third revised plan, the number of floors of Towers 16 and 17 was increased to 40 and 39 floors, respectively, with a height of 121 metres.

Supertech and the Authority claimed that as Towers 16 and 17 formed part of a single “building block” along with Towers 1, 2 and 3, and accordingly, the requirement to maintain distance in accordance with NBR 2006 and NBR 2010 did not arise.

While rejecting this argument, the Division Bench of Justices DY Chandrachud and MR Shah held that the purpose of maintaining distance between buildings is a matter of public interest in planned development. Residents who occupy constructed areas in a housing project are entitled to ventilation, light and air and adherence to fire safety norms.

The Authority also contended that Tower 1 and Tower 17 have “dead end sides” facing one another and thus, the distance requirement of 16 metres was not applicable under NBR 2010. The top court rejected this contention as well and observed that the term “dead end side” is not defined in NBR 2006, NBC 2005 and the UP Industrial Area Development Act, 1976.

According to the rule, the distance required to be maintained between To­wers 1 and 17 was 20.45 square metres, which was clearly violated according to the bench. Further NBC 2005 states that the open space at the ground level should not be less than 12 metres for tower-like structures with heights above 37.5 metres with two setbacks at the upper levels, was held to be non-applicable as the structures under consideration did not contemplate any setbacks at the upper level.

The top court noted that on a reading of NBC 2005 as a whole, the side and rear space around a building higher than 55 metres must be 16 metres. The distance between Towers 1 and 17 being only 9 metres, NBC 2005 was violated. As the temporary NOC given by the Chief Fire Officer on August 18, 2011, clearly stated that NBC 2005 was required to be complied with, the NOC stood automatically cancelled upon non-compliance.

Section 2 of the UP Flat Ownership Act, 1975 (UP Act 1975) states that the Act shall apply only to owners who submit to the provisions thereunder by executing a declaration. Even though there was no declaration made in the present case in terms of Section 2, clause II(h) of the lease deed executed by the Authority in favour of Supertech stated that the UP Act 1975 would be applicable to the lease granted thereunder. Additionally, various provisions of the sub-lease executed tripartite among Supertech, the Authority and the flat purchasers (as sub-lessees) also contemplated the applicability of the UP Act 1975 to the sub-lease.

The UP Apartments Act, 2010, according to the Court was held to be applicable to the third revised plan which was sanctioned on March 2, 2012. The construction of Towers 16 and 17 in accordance with the second and third revised plans reduced the value of the undivided interest held by each existing individual flat purchaser in the common areas and facilities. This violated Section 5 of the UP Act, 1975 and Section 5 of the UP Apartments Act, 2010, as it was done without the consent of the existing flat purchasers, the top court said.

In K Ramadas Shenoy vs Chief Officer, Town Municipal Council ((1974) 2 SCC 506), Chief Justice AN Ray speaking for a two-judge bench of the Supreme Court observed that the municipality functions for public benefit and when it “acts in excess of the powers conferred by the Act or abuses those powers then in those cases it is not exercising.

Further the top court in its August 31, 2021 order cited the cases of Priyanka Estates International (P) Ltd vs State of Assam [(2010) 2 SCC 27] and Esha Ekta Apartments Coop. Housing Society Ltd. vs Municipal Corpn. of Mumbai [(2013) 5 SCC 357] (amongst others), while holding that unregulated construction materially affects the right of enjoyment of property by persons residing in residential areas, and the approval or condonation of such unauthorised construction by either courts or development/planning authorities would affect the public at large.

Did you find apk for android? You can find new Free Android Games and apps.
Share
Facebook
Twitter
Pinterest
WhatsApp
Previous articleDelhi High Court expresses concern over POCSO victims made to interact with the accused during court hearing
Next articleSupreme Court issues notice on plea related to unclaimed money of deceased, legal heirs