In order to cut down restrictive practices of manufacturers, the government is seeking to come out with a framework that makes it mandatory for them to give access to manuals and software updates to customers 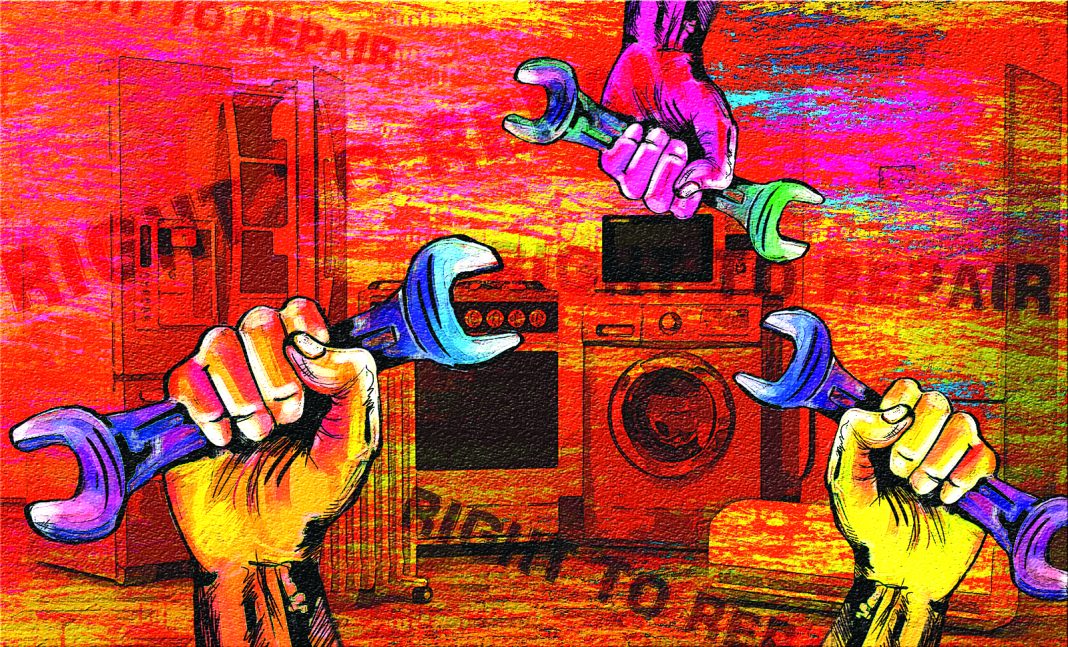 Over the years, countries across the globe have been working on the “right to repair” legislation to enable consumers to fix their products independently. Keeping abreast with the current trend, India too is seeking to come out with a “Right to Repair” legislation with the aim of cutting down restrictive practices introduced by some manufacturers.

At the outset, the “right to repair” is a concept that allows consumers to self-repair and modify the products they buy. The rationale behind this right is that when customers buy a product, it is inherent that they must own it completely. This implies that apart from being able to use the product, they must also be able to repair and modify it with ease and at reasonable cost, without being captive to the whims of manufacturers.

Consumers spend a significant amount of money on purchasing certain products that become obsolete within a few years. This, coupled with the fact that it is either unreasonably expensive or impossible to repair these products, forces them to discard them and purchase new ones.

Recognising the prevalence of such restrictive practices as encouraged and endorsed by certain manufacturers, the Ministry of Consumer Affairs, Food & Public Distribution recently set up a committee headed by Additional Secretary Nidhi Khare and comprising industrial and consumer bodies as well as academics and government officials to develop a comprehensive framework on the “Right to Repair”.

The objective of the proposed framework will be to empower consumers and product buyers in the local market, harmonise trade between the original equipment manufacturers and third-party buyers and sellers, emphasise developing sustainable consumption of products and reduce e-waste.

Under the right to repair framework, it would be mandatory for tech companies to provide complete knowledge and access to manuals, schematics and software updates to customers. It would also be mandatory to make available to customers as well as third parties parts and tools to service devices, including diagnostic tools, so that the product can be repaired in case of minor glitches.

In July this year, the committee held its first meeting and identified various sectors for the implementation of the framework, including farming equipment, mobile phones/tablets, consumer durables and automobiles/automobile equipment.

During the deliberations, the committee raised concern over the practice of manufacturers retaining proprietary control over spare parts, including on their design, and thereby creating a monopoly on repair processes which infringe on the customer’s “right to choose”. It also pointed out that warranty cards of several products mention that getting them repaired from a non-recognised outfit would lead to consumers losing their right to claim warranty benefit.

Emphasising that manufacturers are encouraging a culture of “planned obsolescence”, the committee recognised that the right to repair was getting severely restricted as not only is there considerable delay in repair, but at times the products are repaired at an exorbitant price.

The term “planned obsolescence” was first used by an American industrial designer, Brook Stevens. It is a marketing practice that the design of any gadget is such that it lasts a particular time only and has to be mandatorily replaced after that. This practice favours sellers and makes them influence buying decisions to improve sales and increase profits.

According to a statement issued by the Department, once rolled out in the country, it will be a huge step towards the sustainability of the products and will also serve in employment generation by allowing third party repairs.

The right to repair has been recognised in many countries, including the US, the UK and European Union. The regulatory framework originated in the US with the enactment of the Motor Vehicle Owner’s Right to Repair Act, 2012. As per this Act, automobile manufacturers have to provide necessary documents and information to allow the consumers to repair their vehicles.

In July 2021, the US Federal Trade Commission was directed to instruct tech manufacturers to address unfair anti-competitive practices and to allow consumers to repair their products either by themselves or through third party agencies. Following this, Apple announced that consumers will have the right to purchase spare components of their products.

The UK introduced the “Right to Repair” law in July 2021, under which manufacturers are legally bound to make spare parts available to their consumers and third parties. The existing repair laws in the European Union require manufacturers of machines, refrigerators, dishwashers and television screens to make available spare parts of these appliances to professional repairmen for up to ten years after the product is initially released.

Even though Australia does not have a specific right to repair legislation, it has free meeting places called “Repair Cafes” where volunteer repairmen gather to share their skills with people who bring in their goods.

Though the “right to repair” is not recognized as a statutory right in India, certain judicial pronouncements have tacitly recognised the right. For instance, in Shamsher Kataria vs Honda Siel Cars India Ltd (2017), the Competition Commission of India ruled that restricting and denying access of automobile spare parts to independent automobile repairers by way of end-user license agreement was anti-competitive. Also, the Consumer Protection Act, 2019, recognises that monopoly on repair processes infringes the customer’s “right to choose”, thereby giving partial acknowledgment to the right to repair.

The framework of “right to repair” is being positioned to be helpful to consumers and harmonise the trade between manufacturers and third-party buyers and sellers. A well-drafted legislation will be a huge leap forward to­wards reducing e-waste and striding towards a sustainable environment.

Did you find apk for android? You can find new Free Android Games and apps.
Share
Facebook
Twitter
Pinterest
WhatsApp
Previous articleCJI Ramana asks all present in courtroom to wear masks
Next articleA Spanner in the Works