With the national anthem being made mandatory in madrasas in the state and the government making efforts to modernise them, students coming out of them can be absorbed into the mainstream. 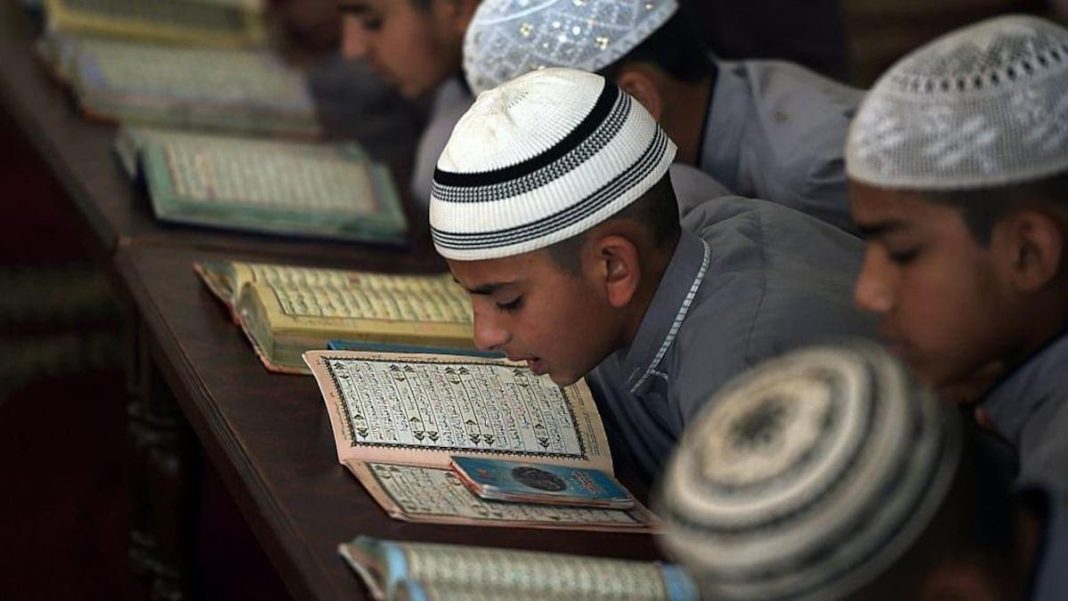 From May 12, 2022, singing the national anthem, Jana Gana Mana, has been made mandatory in all madrasas in Uttar Pradesh. This decision was taken at a meeting of the UP Madrasa Education Board on March 24. Several other decisions relating to examinations, attendance and recruitment of teachers were also taken. The Registrar of the Uttar Pradesh Madrasa Education Board, SN Pandey, also issued an order to this effect to all district minority welfare officers on May 9.

Pandey’s order read: “It is to be conveyed about the singing of the national anthem in the morning before the commencement of classes in madrasas, that in the meeting of the Uttar Pradesh Madrasa Education Board held on 24th March 2022, it was decided that in all the recognised/aided/unaided madrasas, from the upcoming academic semester, it will be mandatory for all the students (boys and girls) and teachers to sing the national anthem (starting from ‘Jana Gana Mana Adhinayak Jai He Bharat Bhagya Vidhata’ up to ‘Jai He, Jai He, Jai Jai Jai Jai He’) in a coordinated tone with other prayers before the commencement of classes.”

The order added: “As you are aware, the annual holiday list announced in madrasas due to the month of Ramadan has holidays from 30.03.2022 to 11.05.2022. Thus, regular classes will start from 12.05.2022. Please take the trouble of ensuring that the above decision of the Board is complied with at the time of commencement of regular classes in each recognized/aided/unaided madrasas. You are required to monitor it regularly.”

General secretary, Teachers’ Union Madaris Arabia, Diwan Saheb Zaman Khan, said: “Till now, in madrasas, usually ‘Hamd’ (praises to Allah) and ‘Salam’ (salutations to Muhammad) were recited before the start of classes. In some places, the national anthem was also sung but it was not compulsory. But now it has been made mandatory.”

Currently, there are 16,461 madrasas in Uttar Pradesh, out of which 560 get government grants. There are 32,827 teachers in these madrasas. The chairman of the UP Madrasa Education Board, Iftikhar Ahmed Javed, said that the state government was taking measures to mainstream students of madrasas.

Now the question is, why is the national anthem mandatory? It is believed that making it mandatory will increase the feeling of patriotism among school children. Along with this, children will also be able to understand the meaning of the anthem. However, this is not the first time that an order has been issued regarding the singing of the national anthem.

In 2017, the Allahabad High Court rejected a petition challenging a Uttar Pradesh government order making singing of the national anthem compulsory in all schools, including madrasas. The Court rejected the plea saying that singing of the anthem was the fundamental duty of every citizen. A bench of Chief Justice DB Bhosale and Justice Yashwant Varma said the petition was based on wrong assumptions. “The petitioner was unable to refer to or draw our attention to any material which may have even remotely established that the singing of the national anthem would violate the beliefs and customs of students attending madrasas in the state,” the Court observed.

“The recitation of the national anthem is the act of every citizen honouring the history and tradition of this great nation and ultimately serves the promotion of a spirit of brotherhood among all without exception to the religious, lingual or regional affiliations of a particular individual,” it said.

The Court also said that there was no proof in the PIL which suggested that students at madrassas had objections in singing the national anthem.

The plea had been made by Alaul Mustafa, secretary of an institution that runs a madrasa in Mau district, against the state government’s order making the national anthem compulsory in all schools, including madrasas. The order also insisted on photographic and videographic proof of the events to ensure compliance.

The UP government is now going to prepare teachers for online studies in madrasas. For this, the help of Diksha Portal of NCERT will be taken. The board is now engaged in mobilising basic facilities for these online studies. When schools and colleges were closed during the lockdown, the central government started the initiation portal and mobile app for online education. Due to the lack of online education, the maximum loss was caused to students in madrasas.

The Uttar Pradesh government is making constant efforts to improve the education system in madrasas. In the last five years, it has taken up the task of modernising them. Work is on to add a curriculum on freedom fighters to madrasas as well. In the budget of 2021-22, the Uttar Pradesh government had allocated Rs 479 crore for the modernisation of madrasas. It had also created a madrasa portal in 2017 to prevent fake madrasas. Under this, work was done to connect 16,531 madrasas out of 19,125 with this portal.

With the modernising of madrasas and implementation of the NCERT syllabus there, students coming out of these educational institutions can be absorbed into the mainstream.

Did you find apk for android? You can find new Free Android Games and apps.
Share
Facebook
Twitter
Pinterest
WhatsApp
Previous articleWhen Marriage is a Tyranny…
Next articleAllahabad High Court seeks reply from UP govt on appointment of chief jail warder