India’s largest state Uttar Pradesh is looking to control its population and has introduced a draft Bill which lays out a rather grand map for the road ahead. Déjà vu? 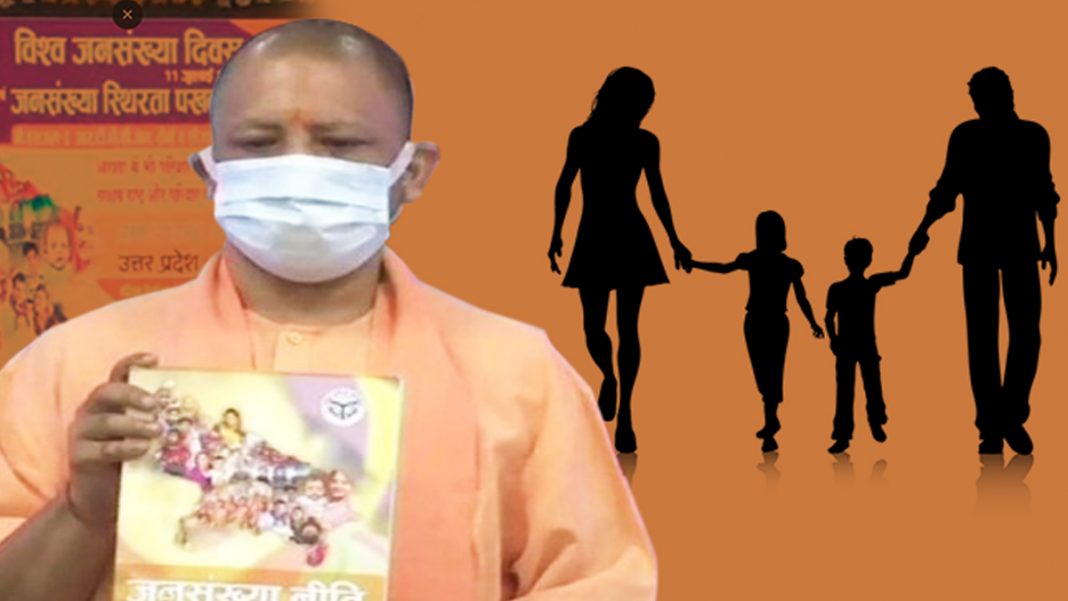 The Bill says: “In Uttar Pradesh, there are limited ecological and economic resources at hand. It is necessary and urgent that the provision of basic necessities of human life, including affordable food, safe drinking water, decent housing, access to quality education, economic/livelihood opportunities, power/electricity for domestic consumption, and a secure living is accessible to all citizens.” It further says: “It is necessary to control, stabilise the population of the state for promotion of sustainable development with more equitable distribution. It is necessary to provide for measures to control, stabilise and provide welfare to the population of the State by implementation and promotion of two-child norm per eligible couple in the State by means of incentives and disincentive”.

Under the Bill, the government employees following the two-child policy will be eligible for incentives, such as:

(a) Two additional increments during the entire service.

(b) Subsidy for purchasing a plot or house site or built house from housing board or development authority, as may be prescribed.

(c) Soft loans for construction or purchasing a house on nominal rates of interest, as may be prescribed.

(d) Rebate on charges for utilities such as water, electricity, house tax, as may be prescribed.

(e) Maternity or as the case may be, paternity leave of 12 months, with full salary and allowances.

(f) Three per cent increase in the employer’s contribution fund under national pension.

(h) Such other benefits and incentives, as may be prescribed.

Besides these, there are additional incentives provided to public servants adhering to the one-child norm:

(a) Two additional increments during the entire service, which will be in addition to the increments provided under Clause (a) of Section 4.

(b) Free healthcare facility and insurance coverage to the single child till he attains the age of 20 years.

(c) Preference to the single child in admission to all educational institutions, including but not limited to the Indian Institute of Management, All India Institute of Medical Sciences, etc.

(d) Free education upto the graduation level for the child.

(e) Scholarships for higher studies, in case of a girl child

(g) Such other benefits and incentives, as may be prescribed.

Any individual other than a public servant, who adopts the two-child norm or one-child norm by opting for sterilisation upon himself or spouse, shall also be given several incentives.

The Bill also provides special benefits for couples living below the poverty line  and having only one child and undergoing voluntary sterilisation operation (for either husband or wife). Such couples shall be eligible for a one-time lump sum amount of Rs 80,000 if the single child is a boy, and Rs one lakh if the single child is a girl from the government.

The Bill also provides certain exceptions in case of multiple births and adoption. An action of an individual shall not be considered a contravention of the two-child norm under the proposed law, if he or she has a child born out of the first pregnancy and subsequently has more than two children, as a result of multiple births in the second pregnancy.

Any individual who already has two children from his marriage and then adopts a third child under The Hindu Adoption and Maintenance Act, 1956 or The Juvenile Justice Act, 2015, The Guardians and Ward Act, 1890 or any other law being in force and dealing with adoption in India shall not be deemed to be in contravention of the two-child norm under the policy. Exemption is also given to parents who have children born out of the earlier pregnancy but suffer from disability and the couple conceives a third child subsequently.

The Bill also says: “Notwithstanding anything contained in this Act or any other law for the time being in force, an action of an individual shall not be deemed to be in contravention of the two-child norm…if either, or both, of his children born out of the earlier pregnancy dies and the couple conceives a third child subsequently”.

A husband in a polygamous marriage violating this law will not receive any benefits under the Bill, and on the contrary, will face several disincentives. However, his wife and children will be eligible for the benefits. The same shall be applicable to a wife in a polyandrous marriage.

The duties earmarked for the state government in the draft policy are:

(a) Implement the revised state population policy to achieve the goals mentioned therein.

(b) Establish maternity centres at all the primary health centres.

(f) Ensure mandatory registration of pregnancy, deliveries, births and deaths across the state.

(g) Distribute iron and vitamin capsules as well as tablets amongst expecting mothers.

(i) Undertake efforts to encourage the husband-wife communication and male participation in all family planning matters.

(j) Organise massive information and education campaigns to generate public awareness related to the benefits of having small families and healthy birth spacing.

(k) Form village-level societies to encourage and as the case may be, disseminate benefits of small family norm, value of the girl child and efforts to promote gender equality in all walks of life.

(l) Undertake such other measures as it may deem fit and expedient for the purposes of this Act.

(m) Facilities at government’s expense for reversing sterilisation operations in case of death or permanent disability of a child of the couple after the sterilisation.

In addition to these duties, the state government will also introduce a compulsory subject relating to population control in all secondary schools and will ensure that contraceptives are available at reasonable rates at all sub-health centres in the state.

Moreover, the state government shall, as soon as possible after the commencement of the Act, take steps for group insurance, at government’s expense, of all qualified allopathic surgeons carrying out sterilisation operations on men or women and of other staff and hospital authorities concerned to cover claims for compensation to be paid to a couple where the woman is operated on or the wife of the man operated on becomes pregnant even after such operation.

In 2019, RSS ideologue and Rajya Sabha MP Rakesh Sinha had introduced Population Regulation Bill, 2019, which is still pending. Senior Advocate Ashwini Upadhyay has written a letter on the need for population control to Prime Minister Narendra Modi. Others like BJP MPs Subramanian Swamy, Harnath Singh Yadav and Anil Agarwal have introduced the Private Member’s Bill in the Rajya Sabha on population control. But so far, they have fallen on barren ground.