Home Facts & Figure Perspective Differences will be no hurdle in India, Israel taking relationship to another level 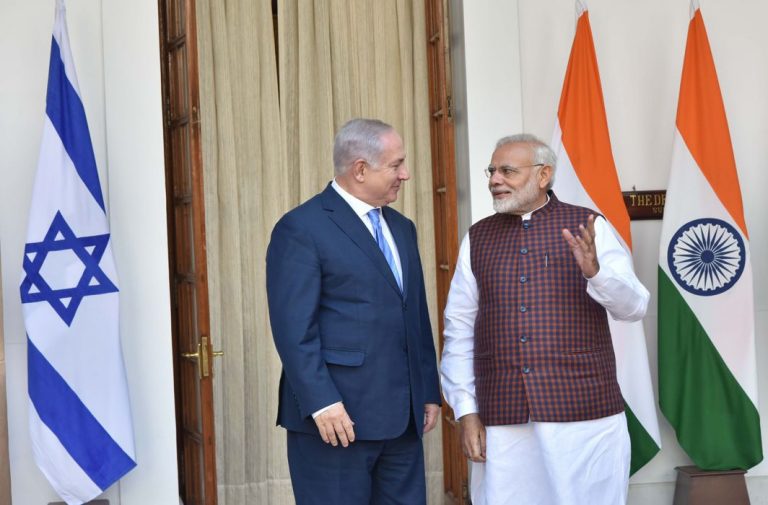 Above: Prime Minister, Narendra Modi with the Prime Minister of Israel, Benjamin Netanyahu, at Hyderabad House, in New Delhi on January 15, 2018/Photo: PIB

Hitches in defence contracts and Jerusalem will crop up, but should be muted

India’s talks with the huge (130) business delegation that has accompanied Israeli Prime Minister Benjamin Netanyahu will hardly be affected by the $500 million defence deal (ANTI-tank missiles) that has soured in the recent past. While technically that deal is not dead – India wants to introduce the indigenously built Nag missiles in their place instead, though the technical specs of the Israeli missiles are different – there are many more areas that interest the two nations and they are very lucrative.

The second India-Israel Business Summit will be held in the evening of Monday (January 15), and it is unlikely that the defence imbroglio will come into this. That has been promoted to a government-to-government affair.

Indian interests lie in the agricultural sector – in which Israeli technical advancements are world renowned, including its drip irrigation technology – the pharmaceutical sector, where India has a good edge, high-tech internet security systems, the alternate energy sector and even the general start-up culture expertise in which Israel are world leaders as well.

In the government-to-government deals two things are to come up for discussion. The first is of the course defence deals, in which Israel will have to be coaxed into technology transfer and into Indian rules of percentage of indigenisation (that applies also to other technology transfer areas), and Jerusalem. US President Donald Trump’s unilateral announcement of moving its embassy to Jerusalem has created an uproar around the world. While India has, understandably, kept quiet, the Israeli Prime Minister is sure to bring this up at the summit with Prime Minister Narendra Modi.  Whatever their personal equations, this is one gift Netanyahu wants to rake back from India for his citizens.

In the business sphere, India has been slowly downgrading its excessive stress on frugal engineering or jugaad and entering a phase of real technological upgrades and research. Jugaad has seen India to certain heights, but the very nature and colour of jugaad has deprived funding to several high-tech research projects across universities and laboratories cross the nation. Real technical innovation needs high levels of funding and simply making cheap alternatives cannot be called as technical “inventions”, experts have opined in private.

To this extent, the 102 businesses that are represented in this delegation that has accompanied Netanyahu looks ahead to interacting with Indian CEOs in an effort to increase bilateral trade to beyond the current $4.3 billion.

FDI will be another critical area for India, with its entire manufacturing sector slowing down despite continuous surges in the two critical market indices, the Sensex and the tech-heavy Nifty. FDI from Israel to India stands at a mere $87 million (April 2000 to June 2015), which is a pitiable figure indeed. More has come in through the US, Europe and Singapore routes, but those cannot be included as pure FDIs from Israel.

Another critical area where Israeli technology and research will come in handy for India is in the area of drinking water. India has been named as one of the countries that will, in the near future, suffer from an acute shortage of drinking water. To that extent, the Israeli method of desalination of sea water and other methods will be extremely welcome before the poor of this country are forced to buy the only basic thing they have grown up as knowing it is free: water.

It has been said that India should follow the Israeli start-up culture to grow exponentially. However, the socio-politico-economic scenario in India is so tinged with biases and prejudices that this looks a long shot. While India is looking at generating employment – so far, most of the projects that the incumbent dispensation has been able to do has failed to generate employment and the government has heard a lot of criticism for that – along with technical advancements, Israeli technology may be good for the poor, but its employment generating capabilities remain in doubt.

The pharmaceutical sector, however, could see large-scale engagements, providing further boost to India generic medicine power.  There will be legal hurdles to cross (such as IP rights), but they are unlikely to derail projects.

Opportunities hide within obstacles, but international diplomacy is all about overcoming these.