At a Supreme Court Bar Association event on the eve of Constitution Day, Chief Justice of India Justice DY Chandrachud reiterates the need for stakeholders to sort out disagreements between Bench, Bar and Executive. 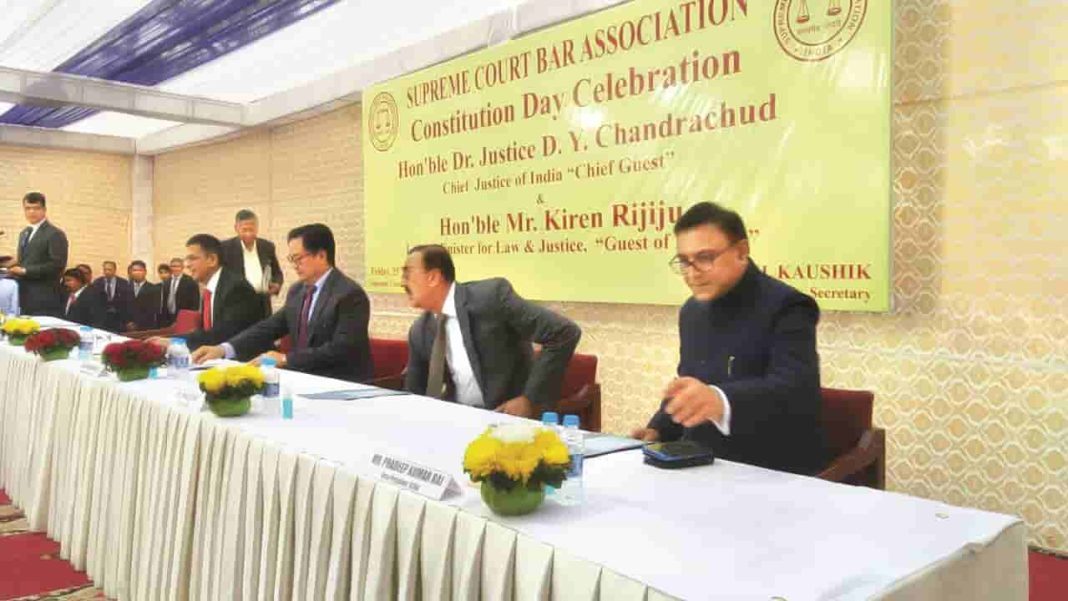 The CJI drew attention to the speedy disposal of cases as a sine qua non in the justice delivery system. “It is the duty of judges to speedily dispose of cases,” he said. The confidence of citizens in the judicial process depended on how efficient the judges were, he said. “For the citizen, it mattered whether the case was heard by the court or not, besides the time it took.” In this light, Justice Chandrachud said the Supreme Court Registry had even put in work on Sundays to rectify the defects in petitions for the cases to be heard. He said the Supreme Court was, nowadays, verifying 200 matters per day. In the past five days, the Registry has verified 982 matters. This has ensured the time required to notify defects has been reduced from nine to just two days, the CJI said. “Currently, as on 5 pm today, we do not have any matter filed prior to November 24, for which defects have to be verified,” he added.

On his plans for improving justice delivery, CJI Chandrachud said from next week every bench of the Supreme Court will hear 10 bail applications, preceded by 10 transfer petitions. “There are about 3,000 transfer petitions pending in the Supreme Court,” he said. “With 13 benches going on right now, our endeavour is to dispose of 130 transfer petitions every day before the vacations,” the CJI said, adding he would also want to ensure bail matters are listed and disposed in an expeditious manner. The CJI said four specialised benches will be functioning in the Supreme Court from next week to deal with Motor Accident Claims Tribunal cases, criminal appeals esp those where accused are still in jail, land acquisition, direct and indirect tax matters. “Cases like these (Motor Accident Claims Tribunal) deeply impact citizens, we need to deliver justice. They wait 10-15 years for a sum of Rs 5 lakh or more since they deal with either death or disabilities.”

Paying paeans to the Bar, CJI Chandrachud said the judges of the Supreme Court don’t believe they stand apart from the fraternity of advocates. “As judges we come and occupy these offices for the terms granted by Constitution, but we never believe that we stand apart from the Bar. And the Bar never believes that it stands apart from the citizens,” the CJI said. He said the landmark constitutional law cases which are lighthouses for the justice system now came into being only because members of the Bar raised issues with their interpretation and insight.

Addressing the often constricting dress code, especially difficult during the summers in the country, Justice Chandrachud said the legal profession must shed its colonial underpinnings. “In a country like India, where we experience extreme heat waves during summers as a result of climate change, we must reconsider the strict dress code for lawyers, at least for summer months.” He was quick to add that women advocates should not be put to unnecessary moral policing over attire. The economic debilitation brought on by the Covid pandemic brought to the fore the lack of social security for lawyers practicing in smaller cities and towns, he said, while referring to the trials faced by lawyers in the last two years. Noting that the legal profession was often described a noble profession, the CJI said that it should not turn into an elitist one, adding that the culture of dialogue must always be there.

The CJI spoke of the social construct the lawyers find themselves in. “If someone doesn’t have representation, it is a failure of one’s constitutional right,” Chandrachud said, pointing to the key role lawyers play in society and their constitutional locus. On law schools, the CJI said he endorsed involving law students in the legal system. Justice Chandrachud said he was open to dialogue on institutionalising it. He suggested to the SCBA that it could consider organising training sessions within the E-committee for members of the Bar, so as to acquaint them with new processes, as the world marched towards e-governance and online courts. Justice Chandrachud urged senior members of the Bar to take pro bono cases of poor litigants every year, saying public interest did not rest only in filing PILs, but also in ensuring citizens had smooth access to justice. In this light, he said law students can make their education more meaningful by working in legal aid and legal service. The CJI revealed he was mulling online remote access to judges’ library database for law clerks to easily access resources. Calling academicians as members of the legal fraternity, the CJI said he was considering to set up an annual Supreme Court of India lecture series on January 28 every year, as it was on January 28, 1950, that the Supreme Court came into being.

Keeping the controversy surrounding the collegium till the last, the CJI said no institution in a democracy was perfect, but the legal fraternity worked within the existing framework of the Constitution, as interpreted and given to them. He said all judges of the Collegium including him, were faithful soldiers, who implemented the Constitution. On imperfections, the solution lies in working out the way within the existing system along with the Executive, the CJI said.

Speaking ahead of CJI Chandrachud, Law Minister Kiren Rijiju said the Executive and the Judiciary are born from the Constitution and should resolve thorny issues by working together. SCBA Vice-President and Senior Advocate Pradeep Rai said the judiciary has been the protector of the Constitution and had upheld its integrity. Rai in jest highlighted that before the Supreme Court building came up, the Supreme Court worked from the soon-to-be old Parliament building and wondered if the apex court can move there once the new Parliament building is inaugurated.