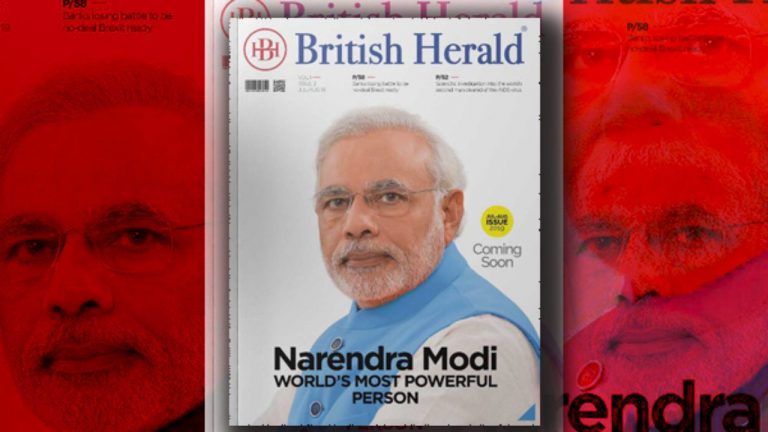 Doordarshan had it as their lead item, as did Zee News, Republic TV and Aaj Tak. Doordarshan went to town with the “exclusive” story but the others were not far behind in playing up the item which named Prime Minister Narendra Modi as “the World’s Most Powerful Person”. The ranking was based on a “Global Readers’ Poll” by a British media outlet called British Herald. Hardly anybody had heard the name before the “poll” was published, but BJP leaders were quick to jump the gun—Union Minister Giriraj Singh declared: “It’s a matter of pride when the supreme leader of our country becomes the world’s most powerful man”, and called British Herald a “leading British magazine”, as did Zee News. It is not. British Herald is an obscure news website owned and started by an Indian national called Ansif Ashraf. It was registered in Britain under the ownership of Herald Media Network Limited in April 2018. Ashraf, who is an Indian national from Kerala, owns 85 percent of the shares. The so-called poll that BJP leaders and some media outlets played up so prominently has little credibility considering that The British Herald Twitter account has less than 4,000 followers. Apart from the BJP and the four Indian media outlets, not a single international publication carried the news of Modi having won a global leader poll. Ashraf’s previous claim to media fame is as the owner of Cochin Herald, a local periodical which also sponsors an annual Global Leadership Award which has a strong Middle East connection.

The Expressway which links south Delhi with the satellite city of Noida is dotted with huge advertising hoardings. Till a few months ago, a majority would be showcasing real estate projects. Today, most are dramatic visuals of live streaming TV shows from Netflix, Hotstar, Zee5, and what are called OTT players, or Over The Top. It’s a similar storyline in all the major metros. Digital video platforms have become the biggest spenders on outdoor advertising. Outdoor advertising is one of the oldest mediums in the sector and was pretty much a fringe player in commercial terms, till now. That is all thanks to the youngest entertainment platform—the OTT. Netflix, along with Amazon Prime, Hotstar and Zee5, are bringing huge revenue to outdoor advertising, also called the Out of Home industry. One estimate says that Netflix alone spent over Rs 50 crore in outdoor advertising over the last year. The Out of Home industry is worth an estimated Rs 3,200 crore and growing rapidly, thanks to adverts by OTT players. Over The Top is a term used to describe content providers which distribute streaming video on demand directly to viewers via the internet, bypassing traditional broadcast television platforms. Thanks to affordable Smart TVs, their audience has exploded and the OTT players now rule the advertising roost as far as outdoor advertising is concerned. In Mumbai, one can find screenshots of Leila, the hit series from Netflix, splashed across the side of high-rise buildings, adding a new and dramatic medium to the advertising industry.

The Associated Press uses Artificial Intelligence (AI) to label the thousands of news photos it handles every day, eliminating the jobs previously done by a team of photo editors/researchers.  In the UK, the Radar Project has a team of six journalists who dig up government data, identify interesting and newsworthy angles, and then develop those ideas into data-driven templates which, using AI, churn out around 8,000 articles every month—that output would have required a substantially large editorial staff. These are just two of the examples in a new book Automating the New: How Algorithms are Rewriting the Media by Nicholas Diakopoulos, Assistant Professor of Communication Studies, North­western University. His book looks at the future of AI-enabled journalism and says that many of the jobs, roles and tasks of current journalists will evolve and be hybridised—blended together with algorithms. Humans still have an edge over automation because of areas key to journalism, including domain expertise, adaptability and creativity, but AI is increasingly making inroads into editorial functions, for example, making news coverage more personalised for individual readers. In conclusion, the book says that journalists of tomorrow will need to be trained to adapt and acquire new skills for working with data, which also means less creativity and individual flair and greater use of formal logical thinking. Not a happy thought.