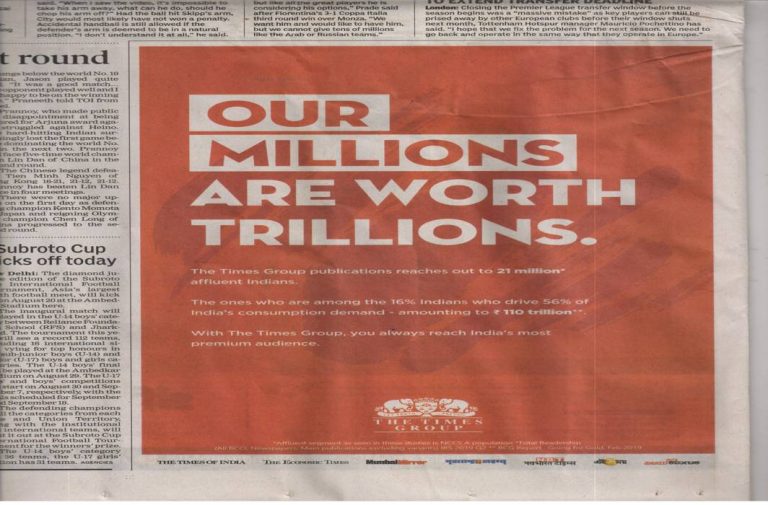 Every quarter, newspaper readers are mighty confused by the contrasting full-page ads put out by the big two in Delhi and Mumbai—The Times of India and Hindustan Times—both claiming to be number one. The Indian Readership Survey for the second quarter of 2019 released last week was no different but it is all part of the me­dia game of tweaking numbers. One claim is based on Average Issue Readership (AIR) where The Times of India sits atop the Mumbai market while Hindustan Times leads in Delhi. The tweak happens when Total Readership (TR) data is taken into account where TOI leads in Mumbai and Delhi. Both sets of figures, however, show a rise in English newspaper readership with The Hindu’s growth being the most; total readership grew by 8.8 percent over Q1 ’19, registering the highest growth rate am­ong the top three national English dailies.

Sanghvi is also known for his food columns and has now turned food-tech entrepreneur. He has invested in a product review start-up called Mishry.com. It recommends best buying options for a range of categories like groceries, snacks, dairy products and kitchen appliances. Mishry has been touted as India’s first product review platform in the kitchen and dining space and Sanghvi’s expertise in the field will, no doubt, add extra cachet. Sanghvi, incidentally, is also the co-founder of EazyDiner, India’s first online restaurant reservation platform.

The newspaper industry had made a big deal about the 10 percent customs duty on imported newsprint. The Indian Newspaper Society had stated: “Publishers of newspapers and magazines are already reeling under severe financial pressure due to many factors like lower advertisement revenues, higher costs and digital onslaught from technological giants. Small and medium newspapers will go into deeper losses and many of them will be forced to close down.” They even met Finance Minister Nirmala Sitharaman and presented their case for a rollback. She, it seems, is in no mood to listen—last week, Sitharaman officially turned down the request for a rollback on the ground that the 10 percent duty was meant to promote domestic manufacturers. Make in India clearly means business, even if it is bad for the newspaper business.

The big media news last week was the Supreme Court refusing to quash charges of sexual assault against Tehelka magazine founder Tarun Tejpal in the case registered by his former junior colleague. That was the bad news. The good news is that his book, The Story of My Assassins, is being adapted as a web series by none other than actor Anushka Sharma. Her production banner, Clean Slate Company, will be producing the web series for Amazon’s streaming platform, Amazon Prime. It will be an intriguing adaptation since the book was seen as being semi-biographical in terms of the plot—the protagonist is a journalist and Tejpal was given security by the then government on grounds of their being a threat to his life. Sources say the series is tentatively titled “Assassin” and will be along the lines of the highly acclaimed American TV series, True Detective.