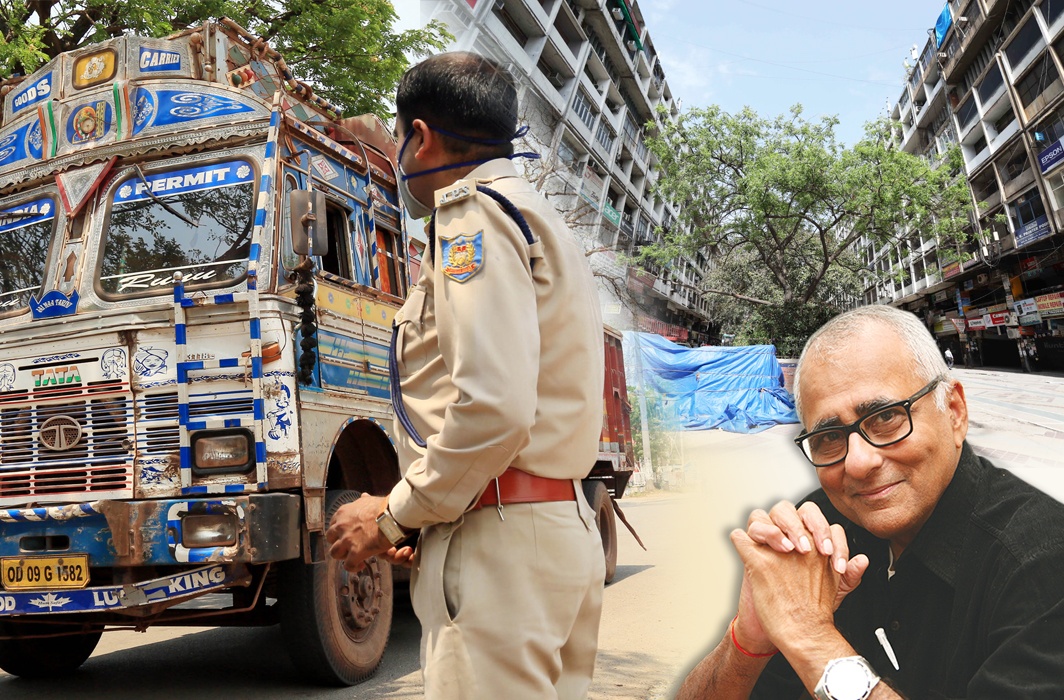 While the media is rightly focused on the pathetic plight of countless million jobless individuals who have been turned into refugees in their own land, trekking or trying to hitch a surreptitious ride hundreds of miles back to their villages from the Covid-19 locked-down metropolitan areas, the commercial sectors from where these wretched of the earth are emerging need analysis and attention.

One key area is ground transportation which has been buffeted to a near standstill, laying waste the lives and livelihoods of millions of working class Indians. The purpose of this editorial is not to criticise lockdown protocols aimed at flattening the pandemic curve but to suggest ameliorative measures to ease the pain and economic suffering raging through the community that keeps the nation’s wheels turning.

Why just ground transportation? Other sectors have taken an equal hammering. Well, one has to start somewhere as days pass by and Indian businesses get disillusioned about their future. For one thing, this sector includes stage carriage, intercity, tourist, company and school buses, tourist taxis, maxi-cabs and buses.

According to the Bus & Car Operators Confederation of India (BOCI), the non-profit, all-India apex body which represents eight important passenger transport segments, its members operate 15 lakh buses and 11 lakh cars on Indian roads. United Nations urban policy and transportation specialist Dr Kulwant Singh said: “We offer direct sustainable employment to over 6 million workers and contribute about $50 billion to the GDP. We are estimating something to the tune of $12 billion in revenues due to the pandemic. Various governments around the world—Singapore, Australia, China, America—have initiated aggressive bail-out packages for several key sectors.”

Adds Prasanna Patwardhan, president of BOCI: “While on the one end, the bailout/stimulus package announced by our finance minister is around 0.7 percent of the GDP, most other countries (who we aspire to compare ourselves to) have formulated packages of between 5 to 20 percent of their GDP. Supporting farmers, poor people and daily wagers by giving them free ration, medical help, direct money transfer to their bank accounts and allocation of a sizeable budget for the fight against corona is a must and a good initiative taken by the government. Sadly, it is not enough. If businesses are not supported timely, then the number of people that will fall into this category will only increase, which will not only increase the financial burden on the government, but will also destroy many businesses, putting millions of jobs and livelihoods at risk.”

In a recent letter to Prime Minister Narendra Modi, Patwardhan lays down a detailed blueprint for ameliorative measures for stimulus and welfare that can be applied to stricken industries and workers across the board.

Due to the lockdown situation, there are no revenues and income. Also, due to severe competition in almost all markets, very few companies have a sufficient buffer to survive such unprecedented circumstances. Under this situation, without apt support from the government, businesses will be forced to lay off thousands of people to survive. My genuine recommendation would be that at such a time, protecting jobs and keeping companies afloat should be the topmost priority. I believe in this time of need, it is important that the government seriously considers taking up the responsibility to pay salaries of people registered for ESI and PF across companies for a period of at least next three months, irrespective of the size of the organisation. These salaries can thereafter be recouped over the next 24-36 months from the respective companies so that there is no direct deficit to the government treasury barring the temporary cash flow. My understanding is that in the government treasury there may be a fair amount of funds lying in the form of PF collection. That money can probably be put to productive use at this time when the nation and its citizens need it the most. Modalities of such a distribution to the people will need detailed working, for which I am sure there are several veterans in your team who can work it out.

A majority of the businesses today are dependent on banks, NBFCs and other financial institutions for sustenance and growth. Under these special circumstances, banks should be advised/instructed to reschedule loans by giving at least six months’ moratorium period to all their customers with a certain credit rating/track record. Although rescheduling, as declared by the RBI, will help businesses by deferring cash flows, it will not be fair for banks to continue booking interest for even the moratorium period. At a time when all businesses, big and small, are undergoing hardships without any direct fault, banks should also take up some responsibility as investing partners and at least waive off the interest for a minimum of three months to support customers in their times of need. In India, banks as it is do not have a very positive image, and it is considered that they lend money to people who do not need it and refuse to aspiring, hardworking entrepreneurs who actually are in need. This is a golden opportunity to create a positive image of banks and other financial institutions and help out genuine businesses. I think these actions will help lakhs of businesses survive, sustain and retain millions of jobs which otherwise almost certainly will be lost.

Once business resumes, it may be very tough for enterprises to continue operations as there would be no money left for working capital due to the long closure and fixed costs burden. Thus, similar to the SBI, other banks and NBFCs should also be advised/instructed to make available additional working capital with a minimal interest rate after giving due consideration to its requirements. Next year is going to be very challenging for all businesses. Under these circumstances, the government and banks will have to make money available for businesses to survive and keep them running, which will keep unemployment under control.

Public-private partnerships have been a key to the success of several economies around the world. With the same faith and confidence, various businesses in India, including many of our members, have participated and pioneered various opportunities in the mobility sector in India by making long-term investments in assets and infrastructure. I am shocked to see that in the time of acute need, almost all government organisations working in public transport have declared a force majeure clause to avoid paying us even the minimum assured business amount. On the one side we have heavy fixed costs to service asset loans, salaries, rents, etc and on the other end, if the government does not support us, then where will such business owners go? Several of these PPP dependent businesses will go bankrupt causing public inconvenience and creating a chaotic situation in the public transport and tourism fields, resulting in unemployment at a large scale. I personally believe that government organisations at such a time of need should come forward and provide timely financial support to their partners and not squeeze them, as otherwise in the future no good organisations would risk participating in PPP schemes in India, which would be detrimental to the entire ecosystem going forward. I believe the first right step in this direction could be by making it mandatory for all government undertakings to immediately clear at least the due payments to all PPP partners and facilitate further advances based on merit/track record. Most of the urban local bodies (ULB)-level organisations and state transport undertaking (STUs) do not have enough money to support their PPP partners. In such a scenario, the government will only have to support these state-level and ULB-managed organisations by providing them enough funding, so that in turn, such organisations can pay their PPP partners.

Various direct and indirect taxes are applicable for businesses depending on the industry. Without stating any particular tax, at this critical time, I believe only deferring taxes will not be enough. A tax waiver (maybe six months) is required to ease businesses from the burden of having to worry about taxation at a point where business sustenance itself has become an issue. The central government can issue an advisory to all state governments to consider waiver of motor vehicle and property tax for at least three months.

Similarly, toll tax should be waived for a minimum of three months after the lockdown period is over by giving extension of the period of concession to toll operators. Banks can support them by providing enough liquidity to sustain them for the next six months and recover it going forward. It is a good opportunity to convert all toll plazas into smart lanes, which would again save thousands of crores in the transport sector, and in turn, help the government save on fuel which is wasted on waiting queues at the toll plazas. In my opinion, it is now high time that the government looks at the logistic sector in a more holistic manner. Expenses on road development, wastage of fuel due to inefficient and wrong toll collection system verses positive or negative impact of such infrastructural development on the progress of the nation and cost of logistic needs to be thoroughly analysed. The government needs to come up with a better, more efficient and cost effective system of infrastructural development.

Since business loss is not insured by insurance companies, many businesses across India will not be able to recover the losses made anytime soon in the future as all vehicles and assets are lying idle during the lockdown period. Since the transport service is the most perishable commodity, to compensate some of its losses, insurance coverage should be given for the entire lockdown period plus 15 days, without taking any additional premium. In addition, this financial year, being very critical for the survival of businesses, insurance premium across various categories of ass­ets/vehicles should not be increased at least for this year.

The mandatory CSR fund of 2 percent should be waived off for this and the next FY for all corporates. Due to the dearth of demand and profitability, this burden may mean a difference between life and death for companies.

Our great nation with its rich heritage is filled with faith, beliefs and pilgrimages. For hundreds of years, our ancestors have taught us to make donations to various places of belief and worship. Today, this massive resource of various temples, mosques, churches and other religious trusts are blessed with solid liquidity in the form of money, gold and other liquid assets. At this time of need, this could be a great resource to support the economic position of our country, businesses and its citizens. The country is only as good as its people. In my opinion, there could be no better productive use of these reserve funds. The government should make an appeal to all such trust funds to come forward and support this cause aggressively.

Did you find apk for android? You can find new Free Android Games and apps.
Share
Facebook
Twitter
Pinterest
WhatsApp
Previous articleAllahabad HC Dismisses Challenge To The New Law For Selection Of Teachers
Next articlePlea To Waive Off School Fees: Orissa HC Issues Notice To Govt.