154,225FansLike
654,155FollowersFollow
0SubscribersSubscribe
Home people Letter From The Editor - (Inderjit Badhwar) HINDUTVA—THE HARD AND THE SOFT OF IT 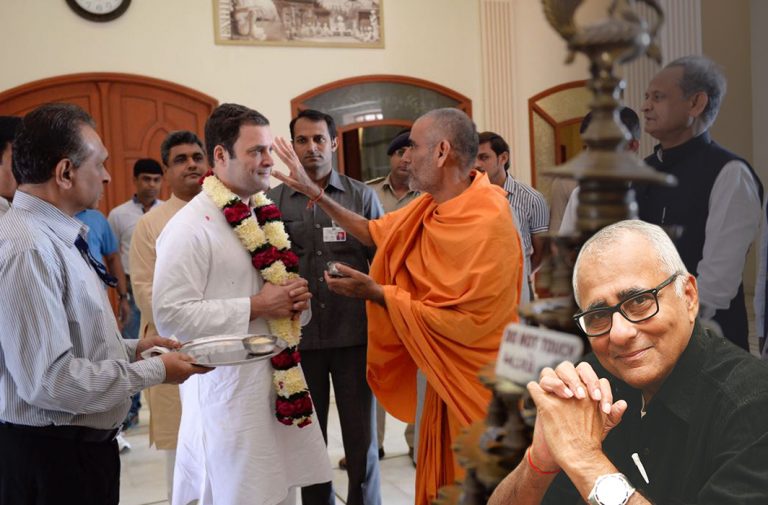 Self-serving, sanctimonious political punditry was at its most brazen display on the Indian airwaves last week. TV anchors and analysts and print journalists tried desperately to grab at fanciful analyses of the unfolding electoral scenario in which the Congress party flipped the BJP in three states which form a major part of the Hindi heartland and contribute 65 Members of Parliament.

The observations on the political phenomenon ranged from “Congress won by default” to “If Congress wins just one state, it’s the end of Rahul Gandhi” to “this was not a pro-Congress vote but an anti-BJP vote”. But there were some serious observations in the midst of this drivel. One of them being that these inanities were obstructing the real narrative that some 14 crore Indians—90 percent of them Hindu—had rejected the prevailing BJP-ism in the Hindi heartland.

But punditry came up with a smarty-pants rationalisation for this development as well: The Congress party under Rahul Gandhi had resorted to the deceptive electoral ploy of playing “soft Hindutva” to woo the electorate. No, nothing else mattered, not hundreds of thousands of farmers marching in protest to Mumbai and Delhi, skyrocketing diesel and LPG prices, the indirect tax regime sapping the core economic vitality of small businesses, demonetisation virtually uprooting the tertiary sector, murderous State-tolerated vigilantism on the rise, the implosion of the CBI ….

“Soft Hindutva” is an oxymoron. “Hindutva” has nothing soft about it. It is a hard, sharp, multi-edged political weapon which finds no mention in India’s ancient Sanskrit culture or Vedic literature. It has manifested itself in the teachings of Veer Savarkar and MS Golwalkar, the patron saints of the RSS and the BJP, which were excoriated by no less a person than Sardar Vallabhbhai Patel, as extremist, hate-filled and venomous, when he, as India’s first home minister, banned the RSS, a right-wing Hindu organisation, following the assassination of Mahatma Gandhi.

Hindutva is a millennial belief in which electoral politics —winning or losing doesn’t matter to the faithful—is an inconvenient stepping stone for the achievement of a Hindu Rashtra, a Reich in which all those who live in India professing different faiths must genuflect, as second class citizens, to the primacy of the Sangh Parivar’s adumbration of  its theory and practice of Hinduism.

Starting with the Ram Mandir movement in the 1990s, Hindutva practitioners like Yogi Adityanath—theirs is essentially a political faith—have invented and added ingenious weapons to their arsenal to spread  fear and insecurity: “Love jihad”, “ghar wapsi”, “gau raksha”, “urban Naxals” and so on. If you continue to believe and practise the Hindu faith as your parents or teachers taught it to you, without subscribing to Hindutva dogma as preached by Golwalkar, et al, you are a “soft Hindu”.

If you wear a sacred thread blessed by your guru, or visit a temple for blessings from a deity you may believe in, or smear your forehead with vermilion on an auspicious occasion without subscribing to the concept of a Hindu Rashtra, which BJP leader Jaswant Singh described as “abominable”, you are committing the sin of practising “soft Hindutva”.

The reality is that “Hinduism”, which is a way of life which evolved from the ancient Sanskrit civilisation, has no unified church or episcopacy, is by its very nature “soft”. Hindutva, by contrast, is aggressive and evangelical.

Those who posit, for example, that the BJP has re-positioned Rahul Gandhi and the Congress into ditching secularism for “soft Hindutva” because he visits temples, understand neither Hinduism nor secularism. Religion and secularism are not incompatible. Secularism means respecting all religions equally within a country. Gandhiji professed himself a deeply religious Hindu but he was one of the world’s greatest secular leaders, as was Sarvepalli Radhakrishnan who penned the best-selling The Hindu Way of Life.

Theocracy, conversely, is incompatible with secularism because it advocates a religious State. So the political debate in India is not between “Hindutva” and “soft Hindutva”. It is between “Hindutva” and “Hinduism.” Hindutva, as preached from the pulpits of the RSS, can never be “soft”. Therefore, those who poke fun at “soft Hindutva” are really taking aim at true Hinduism, which emanated and evolved from the ruminations and poems of Vedic sages and wandering minstrels, including Vivekananda and Ramanna Maharishi, as a liberal, tolerant, secular and vibrant philosophy of life and living.

Hinduism is the search for the truth and enlightenment. Hindutva is the quest for power.