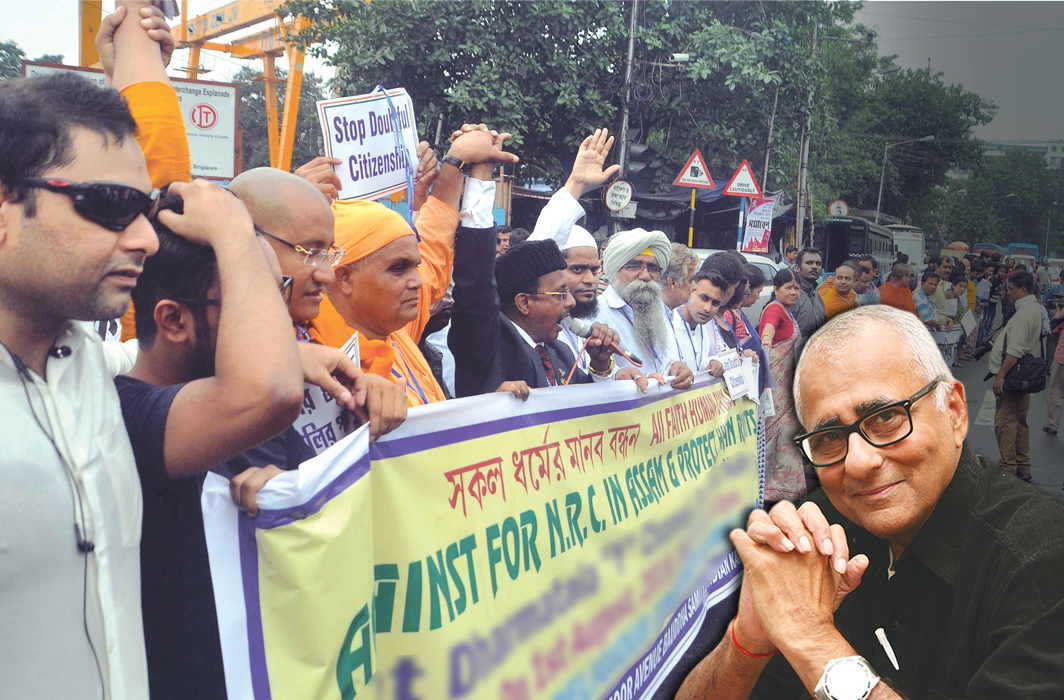 Our cover story focuses this week on what could be the biggest human rights issue the nation has faced since it gained Independence—the prospect of deportation hanging like the Sword of Damocles over the heads of some 40 lakh men, women and children. Their names have failed to appear on the first draft of Assam’s National Register of Citizens (NRC), rendering them, for the moment, stateless persons. There are endless horror stories about the way in which this census was carried out, its purpose being to weed out illegal immigrants, mostly from Bangladesh. But in the process, the babus and the politicians who conducted this exercise seem ready to throw the baby out with the bath water. Caught in the dragnet are Biharis, Gujaratis, Bengalis—a substantial number being Muslims—who, in case after documented case, find themselves or their wives, or brothers, or children, or relatives left out in the cold despite having proved their heritage and domicile through requisite papers, family records and evidence of land ownership over hundreds of years.

It is of little solace to them that the Supreme Court has taken note of this crisis, directing the central and state government not to take any coercive action on the basis of this draft as well as placing before the bench a standard operating procedure (SOP) to deal with claims, objections and appeals from the afflicted to contest their exclusion. Given the politically surcharged atmosphere in which the ruling BJP has been accused by the opposition of manipulating this census in order to deny citizenship to voters who are opposed to the party, thereby suppressing their participation in the electoral process, no quick end is in near sight. The shock, emotional trauma, insult to dignity of citizens, many of them lawyers, doctors, teachers, ex-servicemen, is immeasurable. The social tensions this continuing crisis could cause in other states across India, if it is viewed as a form of ethnic cleansing, could be incalculable.

Even in the best-case scenario—assuming there can ever be a perfect one—suppose that on a review of this original list, 30 lakh people are found to be legitimate Indian citizens. That still leaves out a whopping 10 lakhs. Will they be rounded up? Will they be deported to Bangladesh which has already expressed its unwillingness to take them back on the ground that this whole matter is India’s internal problem? Will they be put in detention camps in full view of the world’s democracies still reeling under the impact of the Syrian refugee crisis? Where would India find the place to create more such detention camps?

The BJP government is already reluctantly dealing with the Rohingya refugees, some 40,000 of whom are living in India in camps registered with the UN refugee agency. Despite the centre’s contention before the Supreme Court that the Rohingya influx is a potential threat to national and internal security, the Court directed the appointment of nodal officers whom parents, relatives, and guardians of Rohingyas could app-roach if children were being denied benefits in health and education. In October last year, the Supreme Court said the Rohingya refugee problem was of a “great magnitude” and the state would have to play a “big role” while dealing with the contentious issue. The direction was passed by a bench headed by Chief Justice Dipak Misra after the Court was informed that children of Rohingyas were being denied basic facilities.

Actually, the Court’s view is consistent with India’s constitutional and international obligations to adhere to the cardinal tenets of human rights—not just of citizens, but “persons”—within India. The government’s eagerness to deport 40,000 Rohingya refugees has been contained because the Supreme Court had agreed to hear a petition contending that the proposed deportation is in violation of the fundamental rights guaranteed under Article 14 and Article 21 of the Constitution, which ensure the right to equality and to life respectively. Even though India is not a signatory to the Refugee Convention, it is a party to the International Covenant on Civil and Political Rights, the Convention on the Elimination of all Forms of Discrimination against Women, and the Convention on the Rights of the Child. The deportation of the Rohingya refugees would not be consistent with the spirit of Article 51(c) of the Constitution, which calls on India to respect its international obligations.

So what exactly are the rights of illegal aliens, non-citizens, refugees, or even foreigners charged by the police with crimes? Do they have any protection under Indian laws? Alok Prasanna Kumar, Senior Fellow at the Vidhi Centre for Legal Policy, writes in The Hindu that during the Constituent Assembly debates, BR Ambedkar remarked that the provision relating to citizenship in the Constitution caused the Drafting Committee the most headache as multiple drafts were worked on and rejected over the years before the present Article 5 was settled upon.

“For good reason too,” writes Kumar. “As Vallabhbhai Patel had then said, India’s Constitution-making process, and especially its citizenship clause, was going to be scrutinised all over the world. As scholar Niraja Gopal Jayal has observed, this was probably because Indian nationalism during the freedom movement had not attempted to define itself on exclusive racial or ethnic bases.”

In fact, the Indian government is clearly on record stating that non-citizens in India enjoy virtually the same fundamental rights as citizens barring voting and equal right to employment. In the final report on the rights of non-citizens – (Summary of Comments Received from U.N. Member States to Special Rapporteur’s Questionnaire, U.N. Doc.E/CN.4/Sub.2/2003/23/Add. 4 (2003) India clarified:

In a recent judgment, in response to the FIR registered by the Maharashtra government against three Ugandan citizens, including advisor to the president of Uganda, which was quashed by the Supreme Court, a vacation bench of Justices AK Patnaik and Ranjan Gogoi said: “Article 21 of the constitution [right to life and liberty] applies to all citizens, whether Indian or foreign nationals. Their right to liberty cannot be res-trained by police due to a business dispute. Our country gets a bad name because of the acts of few police officers, and it is unfortunate that the Mumbai Police, instead of protecting the rights of these foreign nationals, filed an FIR against them and the charges are baseless.”

In a previous article for India Legal during the Syrian refugee crisis and US President Donald Trump’s vicious campaign against refugees and illegal immigrants, I noted that it is ironical that in today’s world, which has been shaped by waves upon waves of human migrations over the millennia, “immigration” and “migrants” have become dirty words in the minds of millions of people across the globe. Thanks to the refugee crises stemming from conflicts in the Arab world and parts of Africa, outsiders pouring into different countries are considered a dangerous, polluting sub-human species unworthy of The Rights of Man which civilised democracies have held to be universal and valid at all times.

Actually, immigration is the true face of globalisation. Hence, world covenants such as UNESCO’s International Convention on the Protection of the Rights of All Migrant Workers and Members of Their Families which came into force in July 2003. Its primary objective is to protect migrant workers and their families, a particularly vulnerable population, from exploitation and the violation of their       human rights.

“The matters shall be decided by them according to the principles of natural justice. Besides, facilitation centers are also proposed to be provided for detaining the foreigners pending the determination of their status, and pending their deportation. So far as the offences under the Act are concerned, they are proposed to be tried by the Immigration Court which would be a court of District & Sessions Judge to be speciﬁed by the appropriate government in each district.”

The problem of legal and illegal immigration into India, especially West Bengal, and Assam, continues unabated. It is a politically volatile issue. But in tackling it, given the human dimensions of the predicament, the government’s action must be tempered by legal due process. As Kumar concludes: “Seventy years (after Independence) India’s approach to citizenship is once again going to be scrutinised by the world. The subcontinent has seen multiple, large-scale humanitarian crises erupt over questions of nationhood, citizenship and identity. One hopes the Supreme Court has the good sense not to spark off yet another for no apparent reason.”