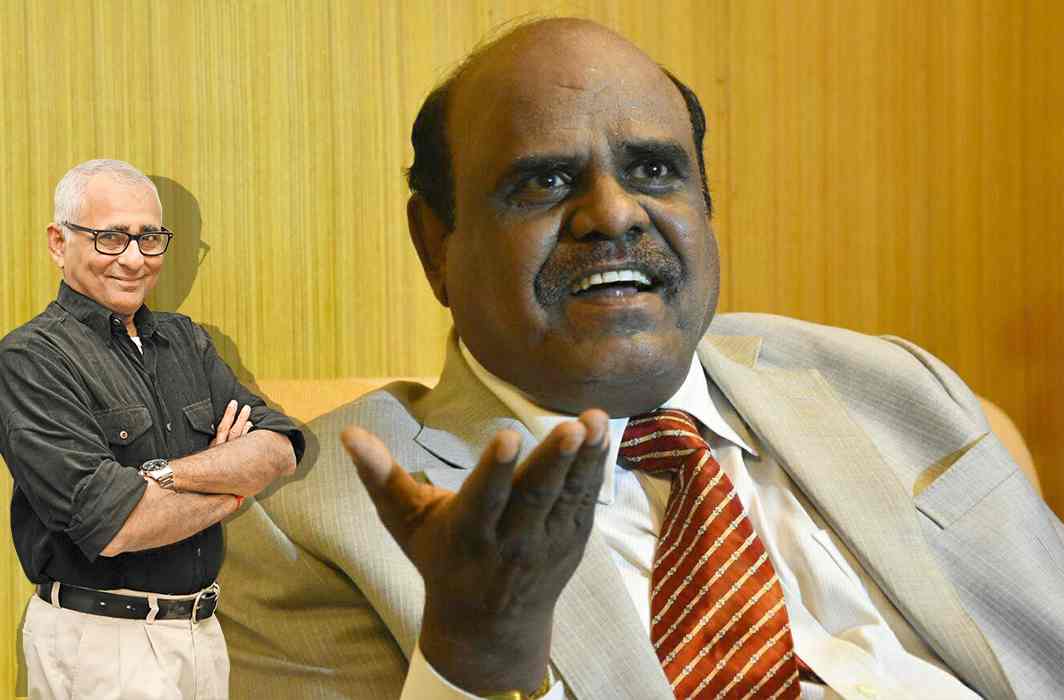 The final Supreme Court judgment which sent former high court judge CS Karnan to jail for contempt of court was not without considerable hand-wringing and introspection by the apex court justices who penned the 90-page magnum opus. This was partly an acknowledgement of the public criticism of some of the glitches that plague the judicial system—particularly the thorny issue of weeding out the black sheep from the family.

Several months ago, when this errant judge was openly and brazenly defying and mocking the Supreme Court, an India Legal cover story entitled “Judges In The Dock” took the subject head on. It said in its introductory line: “The shocking case of Justice Karnan and others before him reiterates the need to evolve a mechanism that makes those who preside over our courts accountable.”

We wrote that a section of the public believes that complaints of misconduct or corruption against the higher judiciary are being ignored and no adverse consequences are evident. The Supreme Court has an in-house mechanism to deal with complaints, but that system lacks transparency. Only in selective cases is the judge involved transferred. The executive is equally to blame in handling complaints against the judges.

The article emphasised that laxity on the part of the judiciary and executive encourages people like Justice Karnan to defy the Supreme Court: “His case has clearly shown that the executive needs to play a more pro-active and effective role in conducting enquiries into complaints against judges and initiate prompt legal action as laid down in the constitution. More than anything, the Justice Karnan episode exposes the need to have a law that governs accountability of judges.”

Section 16(1) of the Contempt of Court Act also does not express clearly its scope and ambit to include high court judges as well. Therefore, the Supreme Court of India had to find ways by interpreting the constitution and Contempt of Court Act, 1971, to deal with the present issue. 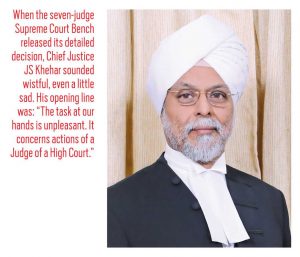 A comprehensive bill to oversee the conduct of judges and quick action against offenders is clearly needed. The Judicial Standards and Accountability Bill, 2010, goes some way to-wards resolving the issue of errant judges. It attempts to lay down enforceable standards of conduct for judges and requires them to declare details of assets, including of their family members. The bill was introduced in parliament after being stalled for a long time and now, a committee has demanded some changes.

When the seven-judge Supreme Court Bench released its detailed decision last week, Chief Justice JS Khehar sounded wistful, even a little sad. His opening line was: “The task at our hands is unpleasant. It concerns actions of a Judge of a High Court.” Among the very least of Karnan’s transgressions who had defied just about every judicial canon of Indian jurisprudence was this defiant letter to the Supreme Court—released to the public— after it had relieved him of his administrative duties in the wake of unproven allegations hurled by him against dozens of sitting and retired judges of the higher benches:

Interestingly, even as the Supreme Court ruled that it was left with no other choice but to convict and sentence Karnan to imprisonment, it did not blindly assert any concept of impunity from scrutiny and accountability and went through considerable pains to discuss the issue of contempt threadbare and also to question whether it could be invoked as a tool for silencing criticism. 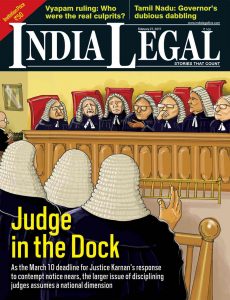 “The main proceeding might or might not have ended in finding the guilt of the contemnor of scandalising the judiciary,” the judges wrote. “(But) the contemnor aborted all attempts to judicially resolve the charge of commission of contempt brought against him by the initial notice of the Court dated 08.02.2017. Rather, he chose to engage in a tirade challenging the very jurisdiction of this Court to enquire into an allegation of contempt against a sitting Judge of a High Court.”

The judgment cited some enlightened words from Lalit Kalita & Others, a landmark free speech versus contempt case involving media criticism of the judiciary: “Judiciary is not over-sensitive to criticism; in fact, bona fide criticism is welcome, perhaps, because it opens the doors to self-introspection. Judges are not infallible; they are humans and they often err, though, inadvertently and because of their individual perceptions. In such a situation, fair criticism of the viewpoint expressed in a judicial pronouncement or even of other forms of judicial conduct, is consistent with public interest and public good that Judges are committed to serve and uphold. The system of administration of justice, therefore, would receive due impetus from a realization amongst Judges that they can or have actually erred in their judgments; another perspective, a new dimension or insight must, therefore, always be welcome. Such a realization which would really enhance the majesty of the Rule of Law, will only be possible if the doors of self-assessment, in the light of the opinions of others, are kept open by Judges.

“But when should silence cease to remain an option? Where is the line to be drawn? A contemptuous action is punishable on the touchstone of being a wrong to the public as distinguished from the harm caused to the individual Judge. Public confidence in the judicial system is indispensable. Its erosion is fatal. Of course, Judges by their own conduct, action and performance of duties must earn and enjoy the public confidence and not by the application of the rule of contempt. Criticism could be of the underlying principle of a judicial verdict or its rationale or reasoning and even its correctness. Criticism could be of the conduct of an individual Judge or a group of Judges. Whichever manner the criticism is made it must be dignified in language and content because crude expressions or manifestations are more capable of identification of the alleged wrong with the system as a whole. Motives, personal interest, bias, pre-disposition etc. cannot be permitted to be attributed as being responsible for the judicial verdict, unless, of course, the same can be established as an existing fact. It is the above category of acts or publications that would fall within the prohibited degree warranting action in contempt law.”

Justices J Chelameswar and Ranjan Gogoi, in their separate judgment, which agreed with the other five judges that Karnan should be convicted, went several steps ahead and made a plea for reforming the system. They wrote that this case extended beyond the immediate problem because it highlighted the “need to revisit the process of selection and appointment of judges to the constitutional courts, for that matter any member of the judiciary at all levels; and the need to set up appropriate legal regime to deal with situations where the con-duct of a Judge of a constitutional court requires corrective measures—other than impeachment—to be taken.” 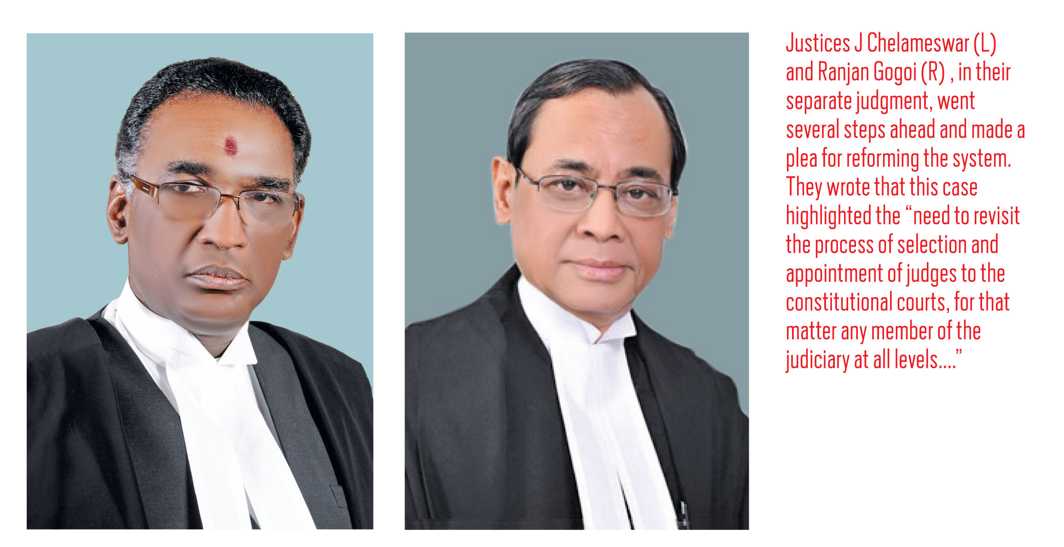 They added: “The conduct of the contemnor ever since his elevation to the bench has been controversial. Obviously, there is a failure to make an assessment of the personality of the contemnor at the time of recommending his name for elevation. Our purpose is not to point fingers to individuals who were responsible for recommendation but only to highlight the system’s failure of not providing an appropriate procedure for making such an assessment. What appropriate mechanism would be suitable for assessing the personality of the candidate who is being considered for appointment to be a member of a constitutional court is a matter which is to be identified after an appropriate debate by all the concerned—the Bar, the Bench, the State and Civil Society. But the need appears to be unquestionable.

“We are only sad to point out that apart from the embarrassment that this entire episode has caused to the Indian Judiciary, there are various other instances (mercifully which are less known to the public) of conduct of some of the members of the judiciary which certainly would cause some embarrassment to the system.

“The framers of the Constitution were people of a great sense of patriotism and maturity, men and women who maintained high standards of civic morality. Obviously, they expected those who are to be chosen for the higher constitutional offices or to be appointed to public service would be chosen by assessing their suitability (efficiency and integrity) by employing appropriate standards. The makers of the Constitution were conscious of the fact that ascendance to higher offices need not necessarily always guarantee rectitude and the incumbent of any constitutional office could resort to behaviour inconsistent with the nature of the office and standards of conduct expected. Thereafter, provisions were made in the Constitution for impeachment of holders of various constitutional offices starting from the President of India.

“When it came to the members of the constitutional courts equally, it was visualised that there can be such occasions. But the standards and procedure for impeachment of judges are much more rigorous for reasons obvious. There can be deviations in the conduct of the holders of the offices of constitutional courts which do not strictly call for impeachment of the individual or such impeachment is not feasible. Surely there must be other ways of dealing with such cases. The text of the Constitution is silent in this regard. May be it is time for the nation to debate this issue.”

Every Indian who believes in the Rule of Law should take these words to heart. It is a clarion call for reform.