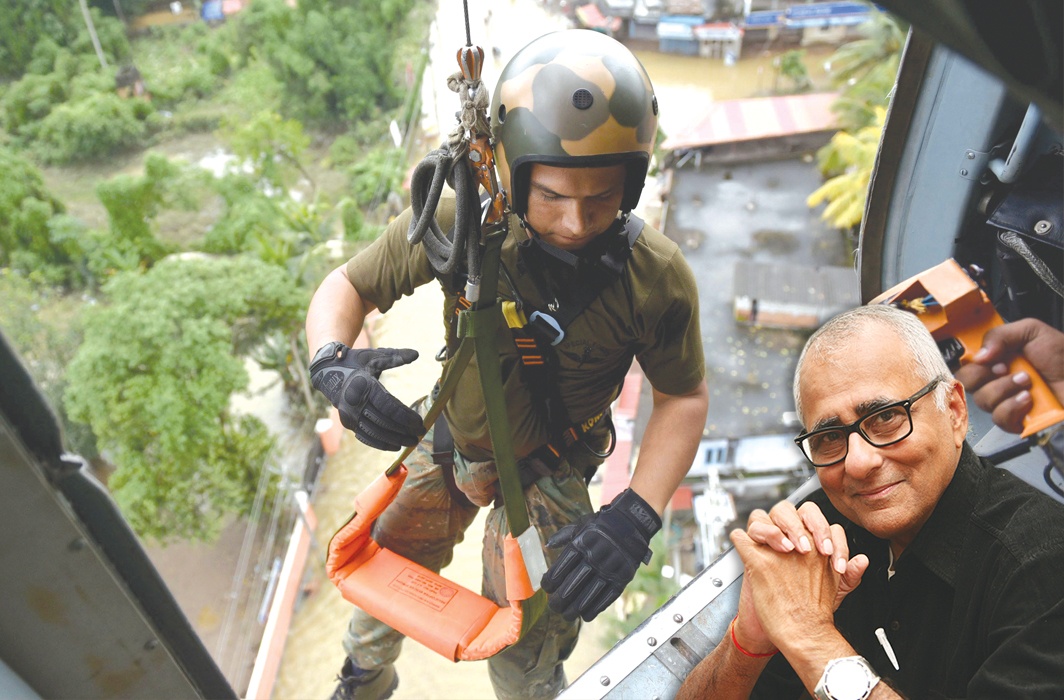 The Indian armed forces can justifiably boast of having played a sterling, even majestic role in protecting the nation against external threats, as well as safeguarding the strategic interests of the Tricolour in the region as well as distant shores.

Equally significant has been the defence services’ second role and impact in aiding civil authorities in handling internal threats, maintenance of essential services, as also to assist the central government or states during natural and other calamities.

This “second” role is by no means secondary. The preservation of a nation’s internal health, safety and security is vital to its survival and ability to compete and preserve its frontiers and commercial and diplomatic interests. The two elements are inseparable and the Services—often known as the most trusted of India’s national institutions—provide the glue that amalgamates the two.

All formation and units located in various places in the country have the instruction to be ready to move, in case required, for aid to civil authorities. But the law states that the state should deploy all its resources before requisitioning the Army. This should be amended as such a step would cause further delay in rendering much-needed assistance.

Whenever called out, the Services have performed above the call of duty during times of natural disasters. The types of assistance they have rendered include infrastructure for command and control in providing relief including communications, both telephone, radio and specialist manpower; medical care with the help of medical teams including treatment at the nearest armed forces hospital; transportation of relief material; logistic back up vehicles such as aircraft/helicopters/ships/boats for transportation of relief material to the affected areas; establishment of relief camps; construction and repair of roads and bridges; maintenance and repair of essential services and evacuation of people to safer areas.

The researcher of this thesis has had the privilege of having been involved in a few such operations. The experiences have been mixed and it is aimed to highlight some of the shortcomings as well as plus points regarding employment of the Army in management of natural disasters. These would be in the form of case studies. Prior to the case studies, it would be of interest to see the involvement of the Indian Army in disaster relief and evacuation of people to safe places.

The role that the Services have played in India during civil disorders, epidemics, earthquakes and floods is legion and needs no repetition. Suffice it to say that the civil population places immense faith in the abilities of the army. The Indian Army is reassuring, fair and untainted by the corruption associated with babus and politicians, and therefore generates self-confidence in those it helps—a key ingredient to survive and persist.

This is why I draw our readers’ special attention to an insightful and highly informative article in this issue of India Legal magazine (scroll down for the link of the article) by the inimitable Colonel R Hariharan, military intelligence specialist, who asserts that as India goes into its second, stricter phase of the Covid lockdown, the services of the disciplined and professional armed forces could be indispensable to the civil administration to handle this emergency.

The Covid-19 pandemic took four months to affect one million people worldwide; but in just 12 days, the figures doubled, observes Hariharan. “It is clear that the world is in for a long haul in its fight to bring it under control. As on April 16, India’s death toll is less than one fifth of the 2,228 deaths in a single day in the US. Rather than patting our backs, we should worry about the second phase. If we go by global projections, it is in the second phase that a nation’s preparedness will be fully tested.”

Given the burgeoning refugee crisis, hunger, migration, violence and malevolent communalism, the civil administration is likely to face more such challenges during the second phase.

Administrative organs and law-enforcing agencies are already fully stretched in enforcing the lockdown. Under such compulsions, says Hariharan, the services of the armed forces are likely to be sought more frequently in the coming days. This will be in addition to the support that the army and the air force are providing round the clock to the civil administration in many remote and not easily accessible areas in the north-east, Ladakh and J&K.

The armed forces are already geared up to fight Covid-19 to assist the civil administration in many parts of the country. It has dedicated 13 hospitals across the country exclusively for the treatment of such patients. The collective capacity of these facilities is 3,000 beds with about 370 intensive care and high dependency units. In J&K, the army is carrying out virus awareness programmes in many places.

IAF transport aircraft have flown hundreds of sorties to airlift 380 tonnes of critical medical supplies and stores and evacuate hundreds of Indians stranded overseas. Under Operation Sanjeevani, the IAF airlifted medical supplies to Male on April 2. On February 26, it flew medical supplies to China and evacuated 112 Indians and foreigners from Hubei province. In March, IAF evacuated 58 Indians from Iran and carried 529 samples for investigation. Indian citizens evacuated from Iran and Malaysia are being treated at air bases at Hindon and Tambaram, respectively. It has set up nine quarantine facilities with 200-300 beds. The IAF has also established 24×7 crisis management cells at Air Headquarters and various Command Headquarters.

A stellar performance already. The Modi government would be wise to heed the Colonel Saab’s advice and warning.

To read Col Hariharan’s article, click the link below

Did you find apk for android? You can find new Free Android Games and apps.
Share
Facebook
Twitter
Pinterest
WhatsApp
Previous articleThe Farce of Federalism
Next articleLoss of Earning Capacity Due to Permanent Disability Cannot Be a Ground for Enhancement in Compensation: Bombay HC