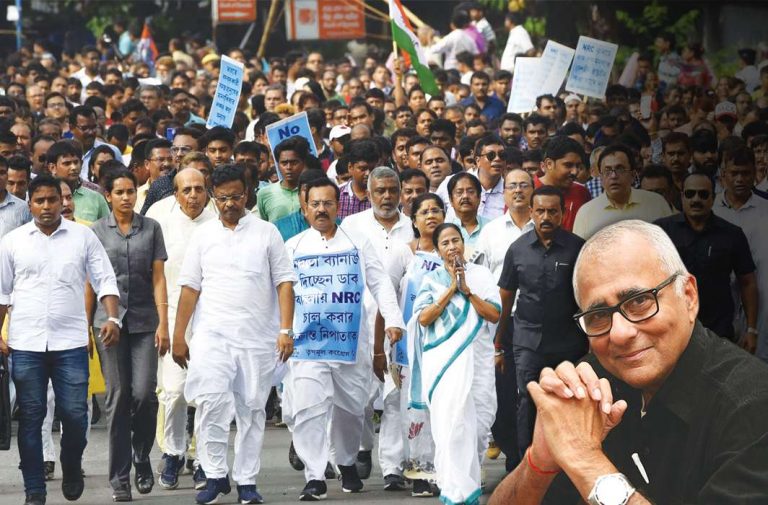 Above: West Bengal CM Mamata Banerjee has been vocal against the NRC in India/Photo: UNI

Home Minister Amit Shah’s desire to expand the National Register of Citizens (NRC) to embrace the entire nation within its exclusionary embrace has met with cheers as well as boos. Among the most vociferous cheerleaders are Hindutva hardliners who believe that the initiative will finally deprive Muslims of their vote bank power, put them outside the ambit of mainstream democracy and clear a major minefield in the path of their beloved “Hindu Rashtra”.

Also backing the move are people who believe that untrammelled illegal immigration is a threat to established social systems, demographic balances and economic activity and can be ignored only at a perilous cost to the sovereignty of a nation state. This is nothing new. Both the views are rooted in rivalries, primordial prejudices and “righting historical wrongs” by trying to erase history through demographic manipulation. The Modi-Shah NRC initiative looks new only because the political ruckus it has created is a headline grabber. The problem of immigration is a worldwide phenomenon. It is ancient. It is contemporary. It is recognised by international bodies as an issue to be tackled through binding covenants, humanitarianism and the rule of law grounded in human rights.

Well before the NRC question resurfaced as a major electoral trump card for the Modi-Shah BJP, the controversy was highlighted by the Vajpayee-Advani BJP as a Sangh Parivar political agenda. The Law Commission in 2002 also made a high-level recommendation on finding a balance between the real problems created by illegal immigration and a law-based approach to handle them keeping in mind international commitments as well as the national interest.

It is ironical that in today’s world, which has been shaped by waves upon waves of human migration over the millennia, “immigration” and “migrants” have become dirty words in the minds of millions of people across the globe. Thanks to the refugee crises stemming from conflicts in the Arab world and parts of Africa, outsiders pouring into different countries are considered a dangerous, polluting sub-human species unworthy of The Rights of Man which civilised democracies have held to be universal and valid at all times.

Actually, immigration is the true face of globalisation. Hence, world covenants such as UNESCO’s International Convention on the Protection of the Rights of All Migrant Workers and Members of Their Families came into force in July 2003. Its primary objective is to protect migrant workers and their families, a particularly vulnerable population, from exploitation and the violation of their human rights.

The Convention does not propose new human rights for migrant workers. Part III of the Convention “is a reiteration of the basic rights which are enshrined in the Universal Declaration of Human Rights and elaborated in the international human rights treaties adopted by most nations”.

So why are those rights subject to another international legal instrument?

The Law Commission’s lengthy recommendations were calibrated and grounded solidly in international commitments as well as India’s own constitutional principles. It is a lengthy report, a far cry from Trump’s ban-’em-’n-lock-’em-up-n’-throw-’em-out approach.

The Commission chose the option of recommending incorporation of new provisions in the existing Foreigners Act was to make it effective enough to meet the main problem of illegal immigration without interfering with the existing legal framework.

“The matters shall be decided by them according to the principles of natural justice. Besides, facilitation centres are also proposed to be provided for detaining the foreigners pending the determination of their status, and pending their deportation. So far as the offences under the Act are concerned, they are proposed to be tried by the Immigration Court which would be a court of District & Sessions Judge to be speciﬁed by the appropriate government in each district.”

The problem of legal and illegal immigration into India, especially West Bengal, and Assam, continues unabated. It is a politically volatile issue. But in tackling it, given the human dimensions of the problem, the government must choose the wiser course of toughness, tempered by legal due process.