As he completes three years in power, the PM seems unassailable. The process of historical rectification, economic majoritarianism and whipping policy into shape has ensured that only the constitution stands in his way

Narendra Modi has entered into the everydayness of Indian life as an acronym, as a policy jingle and as a man who has shaped the language of global India. He has been the sorcerer who has created the magic of a new everydayness, where Indians welcome globalisation as if they are its immediate beneficiaries. He is undoubtedly the wordsmith of our era, creating both a lowest common denominator democracy and a simplified globalisation.

The question is not how do you assess three years of the regime. It is more a question of what you assess him for. Here itself, the first irony emerges. Modi determines the narrative of assessment. In three years, middle class majoritarian India has internalised Modi as if he is the new Roget’s Thesaurus of modern life. He has created a world that people want to believe in and they believe he is forging the Open Sesame to this world. As the Ali Baba of Globalisation, he is incomparable. Corporations from Adani to the banks love him. The difficulty for an Indian critic is to extract himself from the rhetoric and produce a more dispassionate narrative.

Reading the newspapers, one would think it is the 30th anniversary rather than the third. To assess him, let us think of a triptych, three columns each of which captures a set of themes. Let us call the first year, the year of cleansing. It is not the Clean Ganga project I am referring to but the exorcism of words. The first year was a narrative of historical rectification. Indian history had to be rewritten, so Modi becomes the new juggernaut of history. Governance in the first year could be called the Year of the Word. Words like development, patriotism, aspiration, security were spring cleared and set out as stencils of expected behavioural patterns.

Simultaneously, Modi had to clear the decks, and eliminate the possibility of any alternative myth-making. He attacked civil society and NGOs, labelling them as suspect and seditious and convinced the majority that NGOs were a pseudo civil society. In their place, he created a civil society nexus of RSS, VHP, Bajrang Dal and Shiv Sena as part of a behavioural Modification plan. Their vigilantes acted as part of the long arm of governance emphasising the Orwellian dictum that “some are more Indian than others”. As a propaganda war, Modi was brilliant. He became a self-fulfilling prophecy. The minority, the dissenting, the marginal, the left retreated into their shells, leaving the way free for Modi’s politics.

Year II with some overlap could be called the year of construction. Modi began constructing the nation in terms of a global paradigm singing two separate songs. First, for the NRI and the global corporations and second, for the Indian populace, speaking in two separate voices. The first spoke the language of technocracy and investment, telling the world every Indian was an aspiring Indian and a potential NRI, telegraphing the fact to every corporation that India was economically well-behaved and investment ready. He sold the same message in a forked style as development “a populist rhetoric of jobs technology, skilling and employment” creating a complementarity that would push India in new directions. He succeeded again because the academics had retreated and the Media had become his percussionists, repeatedly drumming out his tune. The nationalist India of the first year became the aspirational, middle class, mobile India of the second. This was a layer above the communal Majoritarianism of Year I. This was an economic majoritarianism of Year II where you joined young aspiring India or got left behind. 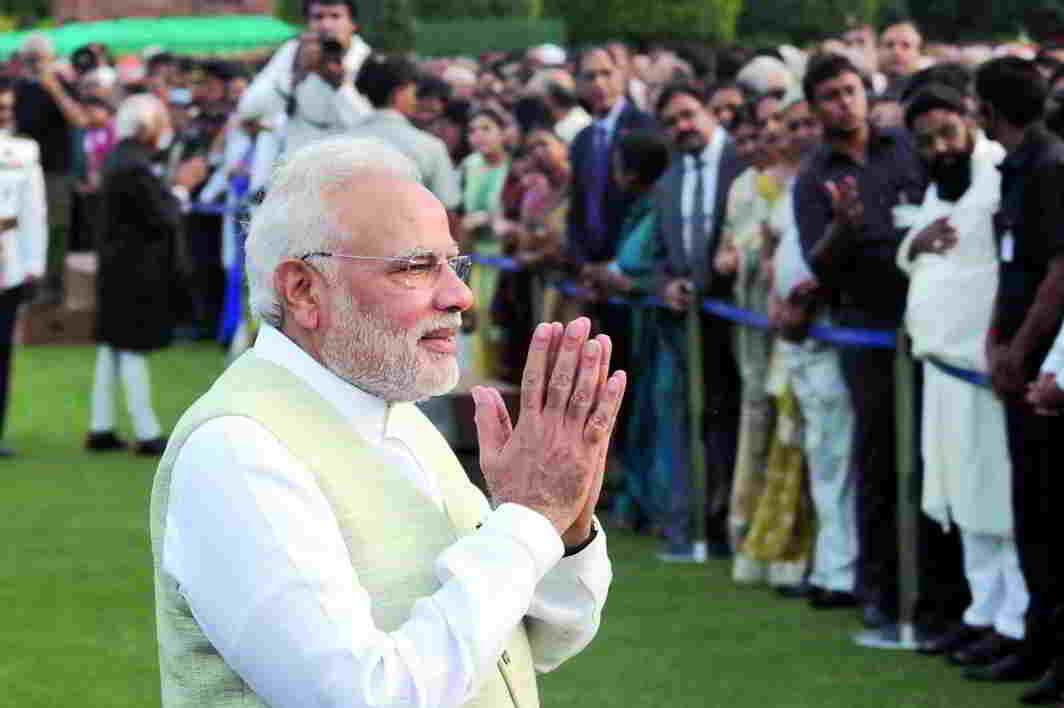 The nationalist India of the first year became the aspirational, middle class, mobile India of the second. An India of economic majoritarianism.

The seeds of a managerial perspective were sold simultaneously as the Modi regime played masculine, managerial, decisive, hard-working, ascetic and puritan. Defence deals and foreign visits sealed this image of a new India and Indian even if the economic deals did not work fully. By end of Year II, the saffron colour was spreading quietly indicating the implacable confidence of the RSS/BJP combine. By Year II, the opposition had been psychologically eradicated and the university protests appeared like Teenage revolts which would be bureaucratically erased. The fate of JNU and Hyderabad summed up this year.

Year III was qualitatively different. It was the year Modi hardened his stand over Kashmir and Pakistan. It was the year of demonetisation and digitalisation where policy was whipped into everydayness. Demonetisation was a disaster for daily wagers, the informal economy, for migrants, for craft labor but these were the defeated or marginals in the new middle class era. 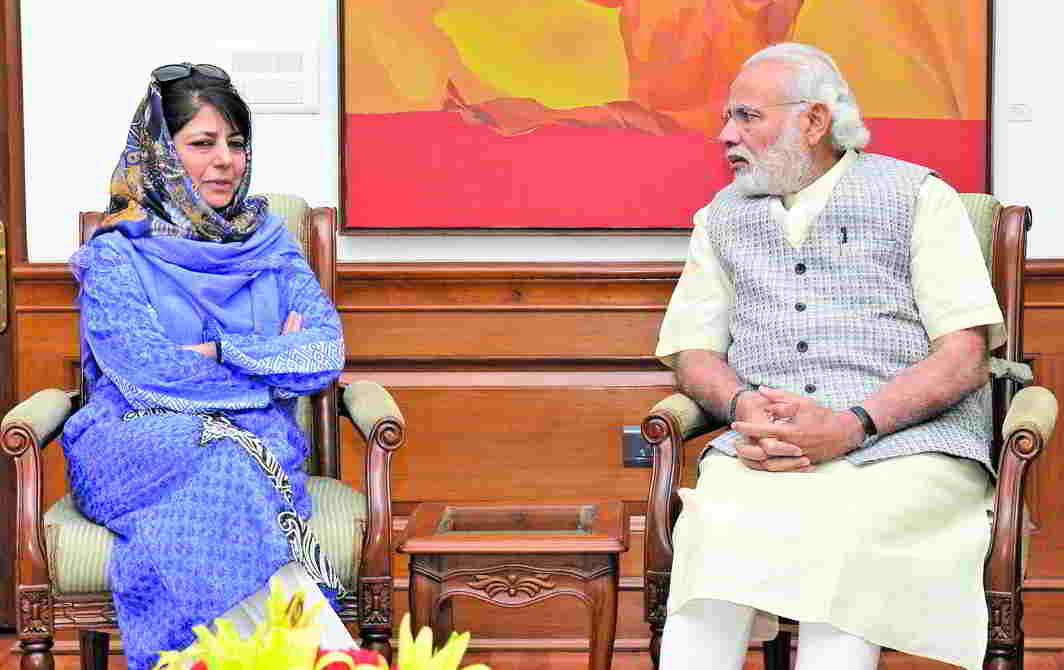 In Year III, Modi hardened his stand over Kashmir and Pakistan. It was the year of demonetisation and digitalisation where policy was whipped into everydayness.

Yet the wait for reform was patient, even more enthusiastic than the tired silence of waiting for rations in the socialist era. It was not reality that counted but the belief that like Maggi sauce, Modi was different.

Secondly, any sacrifice was for the nation and the official battle against corruption. Thirdly, there was a belief that this government was an act of doing, acting and the performative nature of policy rather than its content was enough to keep faith with the middle-class India.

After demonetisation and digitalisation, despite well-martialed arguments against it, it was a walkover. Digital India created a dream far beyond Narayana Murthy and Pitroda. Modi was not only tech-savvy. He was post-modern, post-truth presented by the Indian elite as Trump’s ancestor. The headiness of techno-prophecy continued with the electoral victory in the North-east and the massive triumph in Uttar Pradesh made him feel invisible. The opposition was pathetic. Modi had read India and Indians right.

Modi can be assessed in two ways. First, in terms of Human Development Indicators determining his steps to welfare and well-being. There is general feeling this can wait as the corporate climate is friendly. His declaring the Ganges a scared river completed the marriage between Hindutva and Development regardless of the sheer poverty of the High Court judgment.

The second way is to argue that Modi constructed a simulacra of a new India, which people believed in. He won a propaganda war, a rhetorical battle where people feel he is their PM. He has won the battle of belief. If he is to be defeated in the future, it is this belief that must be demolished. To sum it up, the BJP fought a battle at four levels (4Cs)—cosmos as sacred, the constitution, the cyllabus and the community. The BJP won all four.

Only the constitution stands in the way of a majoritarian onslaught on society. But with the new majority, even the constitution might wilt. India will come full circle to complete the new Dostoevskian dictum—“Show me a majority and I will show you populist authoritarianism.” Year III is just that.