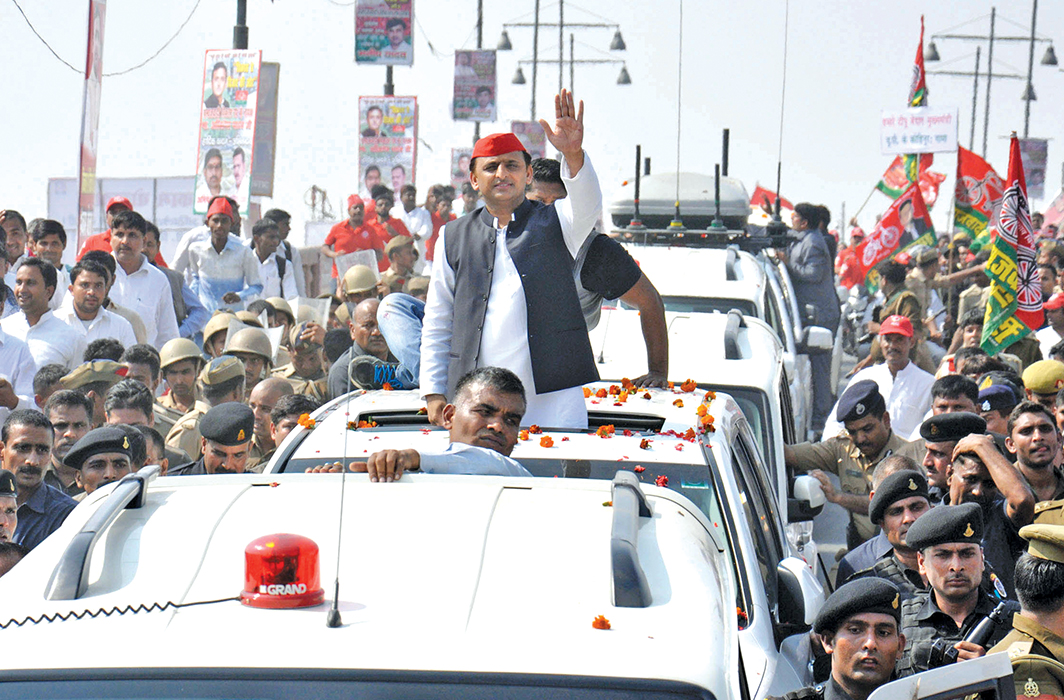 As this crucial state goes to the polls next year, political parties gear up for a royal fight in the face of demonetization, caste polarization and law and order problems

It is often said that UP is India and India is UP. It is also said that the road to Raisina Hill is through Lucknow. With assembly polls early next year, it will, no doubt, be a Kurukshetra as the stakes are high for all parties, be it the ruling Samajwadi Party, the BJP, BSP supremo Mayawati, the Congress and other stakeholders. Over the past 25 years, the SP and the BSP have been alternating in UP.

It is clear that this will be a multi-cornered contest as there are no significant political realignments. Even as parties were preparing for the coming battle, Prime Minister Narendra Modi in one stroke changed the election scenario not only in UP but in other poll-bound states such as Punjab, Manipur, Goa and Uttarakhand by his demonetization move.

The first response from the opposition was that Modi wanted to wipe out the cash reserves of his opponents. The presumption was that the BJP would have secured its own funds much before the demonetization move. Whether this is true or not, the poll campaign of other parties has been adversely hit.

In the 2014 Lok Sabha polls, things changed dramatically. Riding on the Modi wave, the BJP made a stunning comeback winning 71 of the 80 seats and 42.3 percent vote share, decimating the SP and the BSP. The SP won five seats with 22.2 percent share, the Congress two seats with 7.5 percent vote share, while the BSP didn’t even open its account despite a 19.6 percent voteshare.

The fight next year in UP will be intense and more so for the BJP. If Modi wants to win the 2019 general polls, the BJP should ensure the continuation of his magic. After 1991, the BJP has not come to power on its own strength. A win in the 2017 assembly polls will prove that the 2014 win was no fluke. It will also give more clout to the BJP in presidential elections due in July 2017. The BJP is in an advantageous position as the opposition is not united either at the national or the state level. The SP had declined to join an attempted Grand Alliance on the model of the Bihar experiment in UP.

The BJP thinks it has a lot going for it in UP. At the top of the list is the demonetization drive against black money and the surgical strike on Pakistan in September. A win in UP will also give it an upper hand in the Rajya Sabha where it can push through its economic reforms agenda. For a win, the BJP is banking on its core voters—upper castes and Banias. It is also hoping to add votes from Most Backward Castes (MBCs) and some Dalits. And the best bet for the party in this regard is polarization along communal lines.

On the minus side, Modi is riding a tiger as the cash-crunch has started to pinch the common man and the BJP’s core voters—businessmen, traders and rural voters —who supported Modi in the 2014 polls. Added to that the fact that farmers are also facing a fiscal crisis during the rabi season.

Also, the BJP lacks local leaders of stature, which is why it has not announced a chief ministerial candidate. Although the names of Union ministers Rajnath Singh, Smriti Irani, Mahesh Sharma and Varun Gandhi are doing the rounds, the party has consciously not projected anyone. Rajnath Singh is not interested but the others are keen. As part of a well-laid-out plan to get leaders from outside, the BJP recently roped in Swami Prasad Maurya, a prominent MBC leader from the BSP, and Congress leader Rita Bahuguna, a high-profile Brahmin leader. Appointing Keshav Prasad Maurya as the state party chief was also a move to consolidate MBC support against Yadav dominance.

Topping the list of election issues is deteriorating law and order, followed by corruption. In this regard, Modi’s demonetization move is significant. According to BJP leaders, this will be the party’s key theme in its publicity blitzkrieg while the opposition may use it as a key poll plank to highlight the sufferings of the common man.

Other issues include price rise and inflation and national security showcasing the surgical strike. Ayodhya too remains a sensitive issue for the BJP. BJP leader Dr Subramanian Swamy reportedly said: “The Ram (temple) issue is part of our 2014 manifesto, how can we run away from it? We have to deliver.” The Congress party too is trying to play a soft Hindutva card with Rahul Gandhi visiting Ayodhya some time ago. The BJP has already laid the foundation for issues like triple talaq and the common civil code.

However, what counts most in UP is the caste factor. While the BSP succeeded in 2007 in forming a rainbow coalition of upper castes, Dalits and Muslims, it could not sustain it. This party is again looking at the same coalition for the coming polls. The MBCs had backed Mayawati in 2007 but she rewarded the Brahmins by giving them plum posts.

As for the SP, in 2012, the MBCs backed Mulayam Singh, but credit for the victory went to the Muslims. The BSP and the SP had also attempted to coalesce Dalits and OBCs in the nineties but it was short-lived. The alliance of Muslims with some dominant OBCs remains contingent on political tactics. The SP is now depending on its core vote base of Muslims plus Yadav votes. It is, however, on a weak ground with this minority community due to various incidents which occurred during its regime. Also, the ugly feud in Mulayam Singh’s own family is damaging the party. His son, Chief Minister Akhilesh Yadav is youthful and driven, but his own party, father and uncles have undermined him although he has come out with a better image. The real fight will be at the time of ticket distribution. 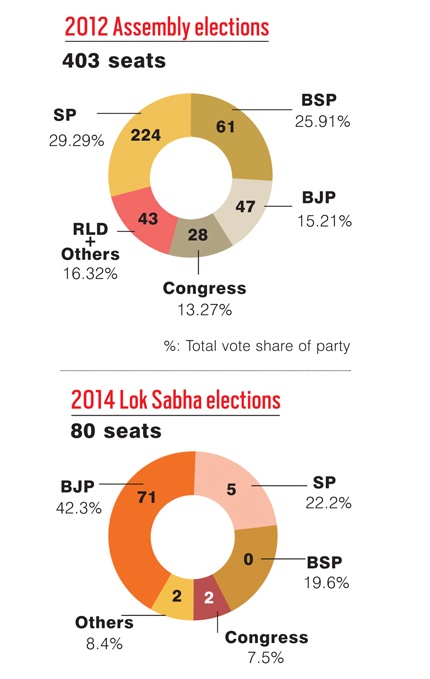 Coming back to Mayawati, she has been quietly working hard to make a comeback. She plans to go solo and is counting on a Dalit-Muslim consolidation. Demonetization has hit her party the hardest because Mayawati deals in cash and the funding is mainly crowd-sourced. In 2014, the BSP had submitted to the Election Commission that it had not received a single donation above Rs 20,000. (Donations above this figure need to be declared.) The BSP has been weakened in recent times and she is now left with Satish Mishra and Naseemuddin Siddiqui as seniors. In some ways, a Congress-BSP alliance would make a lot of political sense but Mayawati is shunning it.

The Congress is also fighting for survival as it faces a leadership crisis and suffers from low morale. The party has been in the wilderness for more than 25 years in UP and is practically non-existent there. It is banking on the dynasty and the anti-incumbency factor to get seats. It is difficult for it to recover from its downward spiral, irrespective of whether Priyanka Gandhi campaigns. Thanks to demonetization, it is struggling to match the campaign of others.

The party has lost its core voters, including upper castes, Muslims and Dalits and has no credible second-rung leaders. That was why it had to bring in former Delhi chief minister Sheila Dixit as its chief ministerial candidate but she is seen as a spent force. Its poll strategist, Prashant Kishore, has advised the party that unless the Brahmins come back, other castes would not look at the Congress. Kishore, who was in Modi’s poll team in 2014, has rubbed many senior leaders the wrong way and they want him out. He and his team have reportedly even been told to keep away from the Congress’ 50-day “Shiksha, Suraksha, Swabhiman” campaign where it will reach out to Dalits in some 3,000 villages. The Congress will play up the deleterious effects of demonetization as its main poll plank, along with poor law and order. It has not been able to form an alliance along the Bihar model with non-BJP parties.

If polls were held today, the fight for the number one position would be between the BSP and the BJP. The SP could slide to third position and the Congress, fourth.  However, there is no knowing how voters will react. The present cash-crunch could turn into public anger.

UP will be a litmus test for all parties. And the results of national and local elections are often quite different. In 2009, the Congress did well in the national elections, but in 2012, it failed to convert it into a state victory. In the 2014 general elections, the BJP did spectacularly well.  Will it translate into victory in 2017? A million-dollar question.