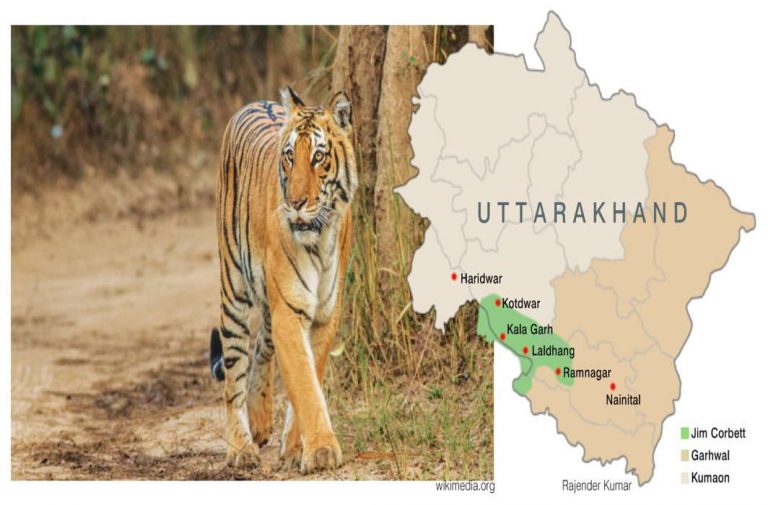 Above: The Jim Corbett Tiger Reserve was established to protect the endangered Bengal tiger

Moves to construct a road through Corbett National Park were abandoned after strictures by the apex court, a showcause notice by the NGT and protests by concerned citizens

Nature always comes in the way of development and it always ends up paying for it. However, things might be changing for good this time. In accordance with strictures passed by the Supreme Court, the National Green Tribunal (NGT) has also decided against the Uttarakhand government’s insistence on building a road through Corbett National Park.

On May 28, the NGT had issued a showcause notice to the centre and Uttarakhand on a plea by advocate Gaurav Kumar Bansal seeking a stay on the construction of a road linking Kotdwar to Ramnagar which would pass through Corbett Tiger Reserve. Bansal contended that the state government was going ahead with the project despite a Supreme Court order prohibiting construction of any road through Corbett, in addition to the ban on tree-felling in the eco-sensitive area. He contended that the construction would pose irrevocable damage to the biodiversity, eco-system and wildlife of the Tiger Reserve.

The plea said: “The Union of India, along with 12 other Tiger Range Countries is a signatory to the St Petersburg Declaration of 2010. The declaration clearly prohibits any intrusive activity within the core tiger breeding areas.” Experts, environmentalists and concerned citizens have also been protesting against the national highway plans. And a Change.org petition initiated by activist Ashish Garg has already accumulated over 25,000 signatures.

However, locals have been demanding that the movement of vehicles be allowed through this passage and it has now become an electoral issue. In the run-up to the 2017 assembly polls, the state BJP put its might behind the demand for a route through Corbett. The then chief ministerial candidate, Trivendra Rawat, had promised the electorate that if he came to power, the construction of Kandi Road would be his first step for the state’s welfare. After coming to power, Rawat in his first press conference in March 2017 reiterated that the road would be one of his top priorities. The same month, state Forest Minister HS Rawat claimed that he had got an assurance from Union minister Nitin Gadkari that the proposed road would become a national highway.

The Laldhang–Kotdwar–Kala Garh– Ramnagar motor road is commonly known as the Kandi Road. Efforts were on even earlier to make this road, but it was not possible due to the unique biodiversity of Corbett Park and pressure from wildlife preservation groups. Kandi Road was closed to the common public after the formation of Corbett National Park which led to an increased distance between these regions. It has been barricaded for decades, leading to problems for the local community.

The Park itself boasts of a rich historical legacy. In 1907, the British administration had considered the possibility of creating a game reserve there. It was only in the 1930s that the process of demarcation for such an area got underway, assisted by Jim Corbett, the author and wildlife conservationist. A reserve area known as Hailey National Park, covering an area of 323.75 km, was created in 1936 when Sir Malcolm Hailey was the governor of the United Provinces. And thus, Asia’s first national park came into existence.

Hunting was not allowed in the Reserve and only timber-cutting for domestic purposes was permissible. The Reserve was renamed in 1954-55 as Raging National Park and in 1955-56 as Corbett National Park. The new name was in honour of Corbett who played a key role in creating the Reserve.

A plea for change

Activist Ashish Garg details the hazards in his Change.org petition

A Change.org petition by activist Ashish Garg has accumulated over 25,000 signatures. He said that the Uttarakhand government’s announcement that the road was to be made into a highway “was simply outrageous”. Garg said: “This is more so when there are alternatives available to construct new roads or widen existing highways which will also reduce the travelling time.”

The Change.org petition describes in detail the hazards and implications of such construction through Corbett National Park. It says: “We, as aware citizens, would like to bring to your notice an unusual and most annoying decision taken by you to construct ‘Kandi’ highway right through the core of Corbett Park connecting Garhwal and Kumaun. As learnt, it is intended to reduce travelling time by mere two hours. And all this is being done to make lives of humans convenient so that they can reach their destination a bit early travelling by their luxury cars.

“Sir, before this road could be taken up for construction, following facts which have huge ramifications on environment, wildlife and biodiversity also need to be taken into account in the larger interest of ecology and the looming threat of climate change.

“1. Not only would it kill thousands of trees and lives dependent on these trees but shall also disturb in a big way, the wildlife. The path of wild animals would be obstructed and new territories would be created, thus bringing an imbalance in the living patterns of wild animals.

“2. This would certainly initiate concretisation and real estate mushrooming across the length of this highway. A beautiful forest which James Corbett conceived is already seeing ingress of lacs of visitors and affecting wildlife. It would be turning into a human habitat and endanger wildlife badly.

“3. Wildlife officials have also warned of serious implications for wildlife animals, especially tigers, if the Kandi road which passes through Corbett Tiger Reserve is permitted for vehicles.

“4. EIA (Environment Impact Assessment) study is yet to be done for the project which is the preliminary requirement to take up any such project. If already done, this needs to be referred for its ill-effects.

“5. Also long ago such an endeavour to carpet the Kandi road had started in 2001 but was halted when poaching of some 8 elephants in the same year exposed the vulnerability of wild animals’ safety from poachers in Corbett. The road would encourage encroachment by people as has happened in Amangarh forests in UP on south side of Corbett.

“6. Earlier, the SC refused Kandi road to be used for public transportation. Instead, SC approved alternative alignments which permitted travelling on the 12 km stretch in Uttar Pardesh on the border of Kalagarh forest division and towards Garhwali Colony.

“7. There are some precedents to such situations too, e.g. the NH is diverted to other (north) side of Brahmaputra to avoid road passing through in middle of Kaziranga park to avoid disturbing of wildlife. The NGT had earlier ordered a ban on roadside shops and eateries along the animal corridors near Kaziranga, among a slew of directions in the wake of increasing wildlife casualties due to vehicular movement on the adjacent highway.

“Instead Sir, the most feasible solution would be to construct a road through Amangarh, Barahpur and Suawala of UP which will reduce the travelling time from Haridwar to Ramnagar by three hours. Since there is a BJP government in Uttarakhand, UP and the centre, it would be easy to draw a consensus. This route is more feasible than Kandi road which passes through the core of the tiger habitat in Corbett. This way conservation can be balanced by creating a model while meeting the ecological needs.”

“With the above facts, we earnestly appeal for necessary instructions to halt the process for construction of this road immediately in the interest of preservation of wildlife of Corbett Park.”

It is ironical that now the state government is trying to push the construction of the road through the core area of the Park. At present, vehicles from Kotdwar have to cover a distance of 162 km to reach Ramnagar, on Kandi Road, the distance is only 88 km. Kandi Road is a straight link between Haridwar and Nainital. The distance between Kala Garh and Haridwar is 76 km, while it is merely 70 km to Haldwani. In spite of this, one has to travel a long distance and also pass through Uttar Pradesh owing to the road being closed. This also adds to the taxes levied on Uttarakhand vehicles.

“The government is trying to find a solution to the Kandi road project issue by which the safety of wildlife is ensured, while keeping the convenience of people in mind,” the Uttarakhand forest minister said in a statement. However, wildlife experts like Avinash Basker, head of the Wildlife Protection Society of India (WPSI), Legal Programme, do not think this is possible. He says: “Once the road is in use, there will be wildlife deaths due to collisions, vehicular pollution, disturbance and easy access to outsiders. The road will act as a barrier for the movement of wildlife.”

The state government is pushing this agenda despite the fact that in 2005, the centre and the states of Uttarakhand and Uttar Pradesh had agreed to an alternative route between Kotdwar and Ramnagar under the supervision of the SC in order to safeguard Corbett Park. However, work on this alternative route never took off.

On March 18, an MoU was signed between the Ecotourism Development Corporation of Uttarakhand Limited and the National Building Construction Corporation Limited (NBCC) in Dehradun. According to it, NBCC would construct the road with a project cost of Rs 2,000 crore. While the process of preparing a detailed project report is underway, Yogesh JP Sharma, its executive director (Engineering), said: “The challenging aspect is the Corbett stretch, requiring an ecological balance of development with conservation.”

The mandate of the project is that the construction activity will have to be carried out under the technical guidance of the Wildlife Institute of India (WII). The feasibility report by NBCC will have to get approvals and clearances from the State Wildlife Board, the National Tiger Conservation Authority and finally, the National Wildlife Board. The road is planned as a “green road” that runs through the Corbett National Park linking Uttarakhand’s Garhwal and Kumaon divisions. This 90-km Ramnagar-Kotdwar road (Kandi Road) will have a 50-km, mostly elevated stretch traversing Corbett Park, allowing unrestricted movement of wildlife and supposedly providing a sustainable solution to the ever-present man-animal conflict. The Corbett stretch will have a flyover, bridge and underpasses and 2020 will be its construction deadline.

However, India is party to the 2010 St Petersburg Declaration on Tiger Conservation, which commits to “making critical tiger breeding habitats inviolate areas where no economic or commercial infrastructure development or other adverse activities are permitted”.  WII is seen in defensive mode, and has urged NBCC to withdraw the provision (clause) from the consent letter in which it had assured help to get necessary permissions under the Wildlife and Forests Laws for the highway construction.

This is not the first time the spectre of highway construction has hung over the Reserve. In 2001, road construction through it was halted after an elephant poaching incident led to concerns about creating easy access for poachers. In 2013, after considering arguments against roadways, a committee from the Ministry of Environment and Forests had formally recommended a ban on all new roads and expansion of existing roads through protected areas in India. While this recommendation is not legally binding, it was meant to dissuade any such future construction activities. Obviously, no lessons have been learnt.