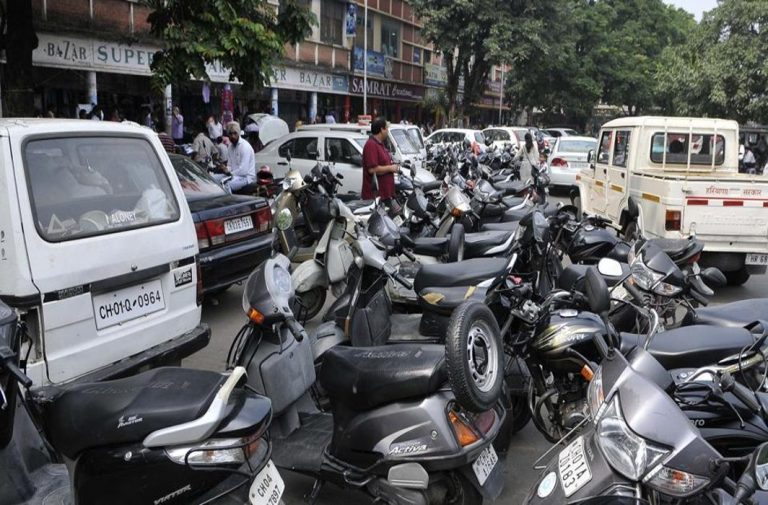 Above: Parking is now a messy affair in Chandigarh, sans any discipline/Photo Courtesy: hellotricity.in

Chandigarh is witnessing a construction spree as it is being converted into a Metropolis and the Punjab New Capital (Periphery) Control Act, 1952, has been ignored

In 1950, the edict of Chandigarh as set by Le Corbusier at the foundation of the city read: “The city of Chandigarh is planned to human scale. It puts us in touch with the infinite cosmos and nature. It provides us with places and buildings for all human activities by which the citizens can live a full and harmonious life. Here the radiance of nature and heart are within our reach.”

The edict was meant to enlighten the present and future citizens of Chandigarh about the basic concepts of planning of the city so that they became its guardians and saved it from individualistic ideas.

The last thing Le Corbusier wanted was for Chandigarh to become a metropolis. This is what he said: “People say that life must come in the city from other source or activity especially industry. An industrial city is not the same as an administrative city. One must not mix the two….We must take care that any temptations do not kill the goal, which was foreseen at the moment of the foundation of the city.”

To prevent such temptations and retain the natural character and ambience of the city, the Punjab New Capital (Periphery) Control Act, 1952, was enacted to declare a 16-km (10-mile) periphery around Chandigarh as a controlled area wherein “no person shall erect or re-erect any building or make  or extend any excavation, or lay out any access to a road save in accordance with the plans and restrictions and with the previous permission of the Deputy Com-missioner in writing”.

Till the time Chandigarh remained a part of pre-reorganisation Punjab (1966) and some years thereafter, this was strictly adhered to. Then a construction spree took over with three townships coming up—Mohali (Punjab) on the western and south-western periphery, Panchkula (Haryana) on the south-east and Chandimandir (Haryana) on the north-east, transforming the “City Beautiful” into a “Tri-City”.

There were serious protests, some led by the late MN Sharma, Corbusier’s pupil and the Union Territory’s first chief architect. He launched a campaign against the gross violation of the Periphery Control Act which posed a threat to the original character of Chandigarh. According to him, there was very little land left for future growth and it was prudent that all major projects be evaluated and put through rigorous scrutiny of high-level technical experts. Sharma pointed out that a periphery of 10 miles around the city was created for agrarian functions such as poultry farming, dairy farming and agriculture. He insisted that the sanctity of the periphery could not be violated, otherwise confusion and anarchy were sure to follow.

All this fell on deaf ears. What is worse, the “Tri-City” is morphing into a “Hydra-City” that may turn into an embodiment of chaos and anarchy. Around Mohali, Punjab has developed Knowledge City, Aerocity, IT City, EcoCity, EduCity and MediCity. Added to this is Zirakpur and “New Chandigarh” which are fast mushrooming on the southern and northern peripheries of the “City Beautiful”.

Now there is one more addition—Aerotropolis—on 5,350 acres in Mohali in the vicinity of the international airport, done by acquiring agricultural land in 14 villages through a pooling policy. The farmers are being offered attractive packages as is evident from the statement of Additional Chief Secretary, Housing and Urban Development, Vini Mahajan: “Following detailed deliberations with farmers and all other stakeholders, the proportion of commercial area has been enhanced and commercial sites have been clubbed in the Land Pooling Scheme approved for the Aerotropolis project…. Also, the demand of a small percentage of farmers for cash compensation to purchase land for cultivation in other areas has been met.”

There are also other attractions such as allotting plots in the same sector or zone from where the land is acquired and higher share of commercial area for landowners if they so desire.

Urbanisation is basically the movement of population from rural to urban areas. This results in an increase of the proportion of the population that resides in urban places. It is a two-way process because it involves not only movement from village to cities and change from agricultural occupations to business, trade, service and professions, but also a change in the migrant’s attitudes, beliefs, values and behaviour patterns.

As urbanisation concerns people, their lives and livelihood, it should have a distinct character, culture, ethos and inclusiveness. But unfortunately, in India, it has become commercial commodification—producing and selling built units (per square foot) to purchasers who can afford to pay.

This is the hallmark of today’s technology/globalisation-driven urbanisation which is exclusive and invasive, keeping a majority of citizens away from the “development stream” and allocating scarce economic and ecological resources to the select few.

What we need is inclusive “urbanism” wherein the rural and urban ecosystems will converge and complement each other. The informal sector, that contributes over 80 percent of urban employment, which is now on the periphery of urban planning, should be mainstreamed. Urbanism would leverage urban facilities and advantages to the full, and practise inclusive and shared development.

Given the nature-based agrarian character of the country, urbanisation should be in consonance, not in conflict, with agriculture. Integrating farming into the urban design is an urgent imperative so that the predatory practice of destroying farms and forests to build cement-and-concrete structures is stopped.

An alternative approach to environmental, economic and social sustainability is to conceive, design and promote natural cities to counter “invasive urbanisation” that destroys nature and its right of way and storage—rivers, floodplains, waterways, lakes, reservoirs, wetlands and marshes.

It is in this context that the concept of “Natural City” becomes relevant. A “Natural City” integrates farming into the urban design and can effectively respond to the massive food security and climate change challenges that rapid urbanisation throws up. It provides a new template to build self-organised, non-invasive habitats that “conserve and use” their living natural resources and are self-sufficient in water, food and milk. Its alternate green-square and built-square design vibes with the pattern of Chandigarh. This results in lowering of ambient and in-house temperature and sharp reduction in energy consumption and pollution, resulting in better health index.

By populating them with farmers, milkmen, food processors, gardeners and other green entrepreneurs, such cities become diverse and inclusive. Time and distance of commuting are cut to less than half and so is the transportation cost.

Unbroken bicycle connectivity throughout the city can be provided by routes that run diagonally along green, shaded squares and avoid built-up areas with ease. In the event, cost of living and consumption levels would be much lower than conventional cities.

The idea of a “Natural City” came up in the minds of a small group of naturalists, urban designers and administrators as a counter to Amaravati (the proposed capital city of Andhra Pradesh), where an “ultra-mega-world-class-city” is being rushed through by destroying prime farm and forest land. But the powers-that-be have stuck to the cement-and-concrete model.

By defying the Le Corbusier edict and the Periphery Control Act, Chandigarh is becoming a metropolis. But can it at least co-exist with nature as originally envisaged?