Law firm Cyril Amarchand Mangaldas brings in a new era of Artificial Intelligence which could rewrite the role of lawyers. Will this be a game-changer to be emulated by others?

A robot lawyer donning black robes and presenting a case before a sessions judge is certainly in the realm of science fiction. But the entry of Artificial Intelligence (AI) into the legal profession is no longer a mad scientist’s daydream.

When Cyril Amarchand Mangaldas (CAM) tied up with Canada-based, Kira Systems, earlier this year to develop customised AI machines programmed for executing legal tasks, it became the first law firm in the country to publicly announce that it is transitioning to the use of this cutting-edge platform. In simple terms, tedious, time-consuming tasks like collecting data, searching records, going through old cases, fact verification, etc—currently done by junior lawyers and paralegals—will soon be left to AI machines to handle. “AI will make law firms more responsive and swifter. We don’t know about others, but we certainly believe in being the first, and are the first, in embracing AI technology in India. In the West, only a few peer firms have taken up this challenge. In many ways, we are pioneers, globally,” said Ashok Barat, chief operating officer of Cyril Amarchand Mangaldas, to India Legal News.

While Barat may claim to be the first to use cutting-edge AI technology, a few top-rung firms like Nishith Desai Associates already use data management systems. But it is a recent development. Even in its basic form, AI has been in use in the legal field for no more than a year. However, developing a dedicated and elaborate platform tailored to understand the nuances of our legal system and to operate in the Indian environment is surely a first of its kind.

Developing a customised software of this kind will be time-consuming. So, Toronto-based Kira Systems and its client are not looking for any quick fixes. Explains Barat: “In order to make the technology fully operational, it must first learn to understand various kinds of documents, agreements etc. in the context of Indian laws, regulations, customs and precedents. This is the phase that we are currently in—teaching the system the Indian legal framework and its nuances. This takes time. It is a serious investment of both resources and intellect and will bear fruit in due time.”

Since it is “work in progress”, CAM is understandably unwilling to share specifics about the AI platform that is being developed. But the website of Kira Systems, a leading machine-learning software provider, gives some clues. For a legal firm like CAM, the company can develop software that uses AI to identify, analyse and extract clauses and other information from contracts and other types of legal documents. It includes machine-learning models “for a rage of transaction requirements across a firm’s practice areas”. Kira’s clients include global law firms DLA Piper, Freshfields, Clifford Chance, WSGR, King & Wood Mallesons and Torys.

Noah Waisberg, co-founder and CEO of Kira Systems spelt out her company’s association with CAM: “The firm (CAM) has outlined a clear transformation and innovation strategy to us that includes not only the adoption of artificial intelligence, but the productisation of their legal knowledge and the introduction of unique skills not yet seen in the Indian market. We’re honoured to be part of the firm’s exciting journey.”

However, the big ticket entry of AI has brought into focus several questions: Will its introduction prove to be a great game-changer in the legal business? Will other firms follow in the footsteps of CAM? Will those entering the legal profession have to come to terms with part of their territory being taken over by machines? And the most important question, will the curriculum followed by law students now have to be tweaked appropriately to make provisions for the AI factor?

These are still early days yet, but some believe that the entry of Bots will signal a paradigm shift in the quality of lawyers and paralegals hired by law firms in future. It will also signal the rise of lean and efficient operations in which employees will be hired for their intellectual skills and not for hard work alone. Barat said: “Lawyers will have more time to handle substantial tasks that test their talent and knowledge rather than doing routine analysis.”

According to a recent study by international consultant Deloitte, approximately 39 percent of legal jobs may become redundant in the UK in the next decade or so. The job loss, it said, would become very visible from 2020 and there would be “profound reforms” which could change job profiles in law firms in Britain. 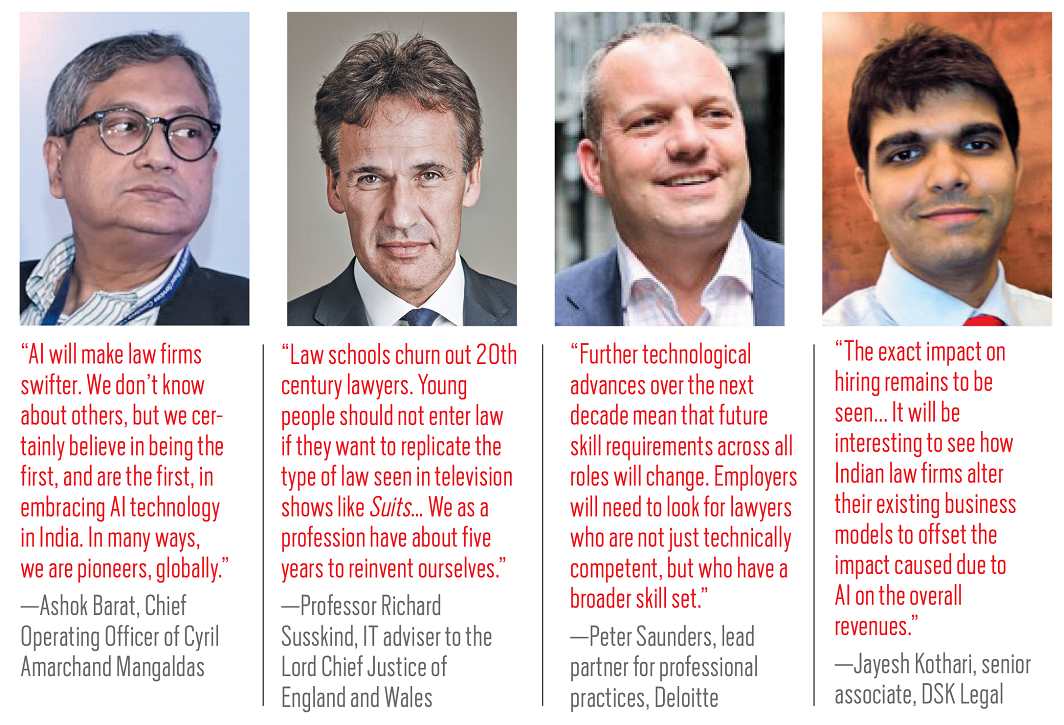 To quote Peter Saunders, lead partner for professional practices at Deloitte: “Further technological advances over the next decade mean that future skill requirements across all roles will change. Our report shows that firms have already identified a mismatch between the skills that are being developed through education and those currently required in the workplace. Employers will need to look for lawyers who are not just technically competent, but who have a broader skill set.”

Such alarming job loss statistics may not be relevant to India, at least for now. Jayesh Kothari, senior associate with DSK Legal, Mumbai, blogged some observations in the context of CAM going in for AI:

“Though AI may not completely replace lawyers, the overall impact of AI on the hiring processes of law firms remains to be seen especially in the Indian context. In addition to providing quality legal services, law firms will have to ensure that their lawyers are better equipped with sound negotiation skills, strong legal/technical interpretation and effective client management skills to enjoy the advantage over other law firms who are already equipped with AI or are in process of migrating to AI. It will be interesting to see how Indian law firms alter their existing business models to offset the impact caused due to AI on their revenues.”

That AI is here to stay is a reality that has been accepted by the legal profession in the West. With Indian firms taking on foreign clients and bringing arbitration cases to this country, it is clear that they must adapt to new technologies to be competitive at the global scale. The AI factor cannot be dismissed. Cyril Shroff of CAM stated after the tie-up with Kira Systems: “Our clients expect us to be at the cutting edge of the practice of law, and of the business of law. For us the business challenges of our clients come first, and to tackle that we need a suite of different tools and advanced skills.”

If AI will impact the functioning of lawyers and law firms, then it should necessarily reflect on the curriculum that is devised for students of the future. When contacted, a faculty member of the National Law University, Delhi, told India Legal News that the AI factor has not yet found mention in the current syllabus. But he said that it will have to be incorporated in the near future: “If law firms are beginning to use AI, then we will have to take cognizance of it because it will alter the way lawyers are expected to function.”

According to Professor Richard Susskind, IT adviser to Lord Chief Justice of England and Wales, change is certain and the legal profession and education have to quickly adapt to it. He says that the legal profession has until the early part of the next decade to prepare for “massive technological advances” that shall “reshape” the industry scenario.

The picture that Susskind painted of the future at a lecture at Law Society, London, is appropriately revealing: “It is not that there will be no jobs in the future, but the 2020s will be a decade of redeployment. It is not an emergency but over the next five years we have to prepare. More and more legal services will be enabled by the support of new technology. You can say ‘that is for the technology industry to sort out,’ or you can be part of the technology industry.”

Susskind was sharply critical of law schools across the world which he felt were churning out “20th century lawyers” who may be irrelevant in the not so far away future. “Young people should not enter law if they want to replicate the type of law seen in television shows like Suits… Start preparing now. We as a profession have about five years to reinvent ourselves, to move from being world-class legal advisors to world-class legal technologists.”

Closer home, Barat said: “Law colleges now will definitely need to embrace a curriculum that is designed to inculcate not just appreciation but also working knowledge of tools that involves use of technology in every sphere of their working.”

Professor Susskind’s advice was meant for a western audience but the legal profession in India should recognise its relevance. Remember India is a hub of software professionals and AI is being developed here too. Last month, Infosys announced that it had exported its AI platform Mana to process contracts for a bank in Asia which would have required a team of at least 10-15 dedicated lawyers. Vishal Sikka, Chief Operating Executive of Infosys was quoted as saying: “We had an astonishing experience with a client in Asia…We were able to eliminate a team of lawyers by using Mana to analyse non-disclosure agreements and many other vital contractual documents….”

Meanwhile, the software company’s competitors have developed their own AI platforms. WIPRO has Holmes, TCS, Ignio and Tech Mahindra, TACTix. The writing is in the code.