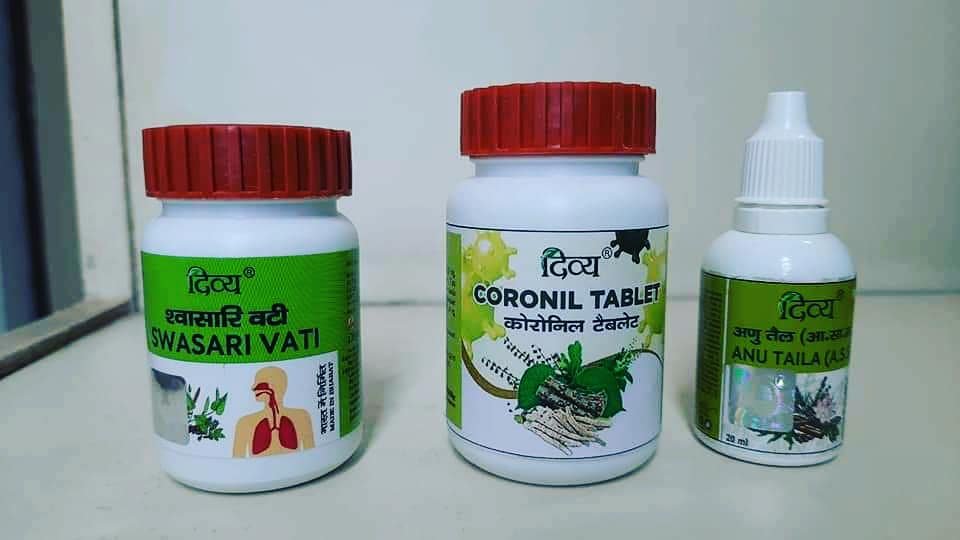 Even as an FIR was filed against Baba Ramdev and others for “misleading” ads positioning Coronil as a Covid cure, the AYUSH Ministry has allowed the company to sell it as an immunity booster

Patanjali founder Baba Ramdev once again found himself in trouble. An FIR was registered against him and four others in Jaipur for allegedly misleading people by selling an Ayurvedic medicine which they claimed could cure Covid-19. The other four are Acharya Balkrishna, CEO of Patanjali Ayurveda Limited, Anurag Varshney, an employee of the company, Balvir Singh Tomar and Anurag Singh Tomar, chairman and director, respectively, of the National Institute of Medical Sciences & Research (NIMS).

The FIR was registered on the basis of complaints filed by individuals at Jyoti Nagar police station in Jaipur. The complaint was filed for offences punishable under Section 420 (cheating) of the IPC and Sections 4 and 7 of the Drugs and Magic Remedies (Objectionable Advertisements) Act, 1954. Baba Ramdev and Balkrishna claimed at a press conference recently that their company had developed a kit containing “Coronil and Swasari” which could give 100% cure for Covid-19. The medicine is priced at Rs 545 and its major ingredients are phytochemicals derived from ashwagandha, tulsi and giloy, medicinal plants.

However, after a week of controversies, the Ministry of AYUSH, on July 1 allowed Patanjali to sell its product as an immunity booster and not as a medical cure for Covid-19.

One of the complainants in the FIR, advocate Balbir Jakhar, alleged that the lives of common people were at stake as neither the centre nor the Rajasthan government was aware of any clinical trials of the drug. However, Patanjali Ayurveda claimed that all legal formalities had been complied with.

Shortly after the launch of “Coronil and Swasari”, the Ministry of AYUSH taking suo motu cognisance of media reports, directed Patanjali to refrain from advertising and publicising its product until it had been verified.

It asked Patanjali to provide details of the name and composition of the drug, the name of the hospital where the research study was conducted, the protocol, sample size, Institutional Ethics Committee clearance, Clinical Trials Registry of India registration and results of the studies.

The ministry stated that it was not aware of the claims and details of the product. Moreover, on April 12, 2020, though the Ministry of AYUSH had allowed research for Covid-19 treatment using traditional medicines, certain conditions were imposed. One of them was to “apprise the Ministry of Ayush, Govt of India about the research developments”.

Moreover, advertising an Ayurvedic medicine for therapeutic purposes is prohibited under the Drugs and Cosmetics Rules, 1945. In 2018, the centre inserted Rule 170 in the Drugs and Cosmetics (Eleventh Amendment) Rules 2018 which stated: “The manufacturer or his agent, of Ayurvedic, Siddha or Unani drugs, shall not participate in the publication of any advertisement relating to any drug for the use of diagnosis, cure, mitigation, treatment or prevention of any disease, disorder, syndrome or condition.” Hence, advertisement of only non-therapeutic medicines is allowed after seeking prior permission of the AYUSH ministry.

The FIR lodged against Ramdev and others mentions Sections 4 and 7 of the Drugs and Magic Remedies (Objectionable Advertisements) Act, 1954. Section 4 prohibits misleading advertisements relating to drugs and says that “no person shall take any part in the publication of any advertisement relating to a drug if the advertisement contains any matters which—(a) directly or indirectly gives a false impression regarding the true character of the drug; or (b) makes a false claim for the drug; or (c) is otherwise false or misleading in any material particular”. Section 7 of the Act relates to the penalty which is imprisonment of upto six months on the first conviction and upto a year on a subsequent conviction. As the offence is a cognisable offence, the police has the power to directly register an FIR in such cases.

Soon after the AYUSH ministry restrained Patanjali from publicising its drug, Maharashtra and Rajasthan also restrained the company from advertising or selling Coronil until the ministry gives its approval. Further, the health department of Rajasthan government also issued a notice to the NIMS in Jaipur for conducting clinical trials for Coronil without informing the state government.

Meanwhile, the drug department of Uttarakhand also issued a notice under Rule 170 of the Drugs and Cosmetics Act, 1940 to Patanjali and said it had only applied for a licence to manufacture an immunity booster against cough and fever and not for any drug claiming 100% cure for Covid-19.

In its reply to the department on June 30, Patanjali denied having manufactured any medicine claiming 100% cure for Covid-19. It stated: “… it is denied, we have made any medicine named as ‘Corona Kit’. We have only packed the following medicines–‘Divya Swasari Vati’, ‘Divya Coronil Tablet’ & ‘Divya Anu Tail’ in a shipping/packaging carton for shipping purpose.” Moreover, the medicine had not been sold till now and it was not being publicised. Rather, it had promoted the successful trials on Covid patients. It further said that the company was only sharing the benefits of the medicine with people.

After Patanjali launched its medicines, several complaints were filed in various states, including a court in Muzaffarpur, Bihar. It sought registration of an FIR for offences punishable under the IPC, including cheating (Sec 420), criminal conspiracy (Sec 120 B), a malignant act likely to spread infection of a dangerous disease (Sec 270) and intentional insult with intent to provoke breach of peace (Sec 504).

Similarly, a petition was filed in the court of the judicial magistrate of Junnar, Maharashtra, against Ramdev and Balakrishna. It was filed by advocate Madan Kurhe who said in his petition that “without clinical trials and without any permission from the ICMR and the Ministry of AYUSH, Ramdev Baba’s actions in bringing drugs directly into the market for sale, without proving the usefulness of the drugs from a scientific point of view, he considers himself above the law”.

Apart from the above mentioned laws under which Ramdev and his company can be prosecuted, there are other sections of the IPC under which they can be made liable. These include IPC Sections 269 (a negligent act likely to spread infection of disease dangerous to life) and 276 (sale of a drug as a different drug or preparation), which provides for up to six months imprisonment.

Though Baba Ramdev in a press conference had said that all issues with the AYUSH Ministry had been resolved and Patanjali had complied with the legal procedures, the fate of the FIR against Ramdev and Patanjali is for the courts to decide.

Did you find apk for android? You can find new Free Android Games and apps.
Share
Facebook
Twitter
Pinterest
WhatsApp
Previous articleDelhi HC Issues Notice To SCBA In Ashok Arora’s Suit Challenging SCBA’s Resolution Suspending Him From The Post Of Secretary
Next article‘New, improved act provides a better footing for the consumer’