The International Human Rights Day was a time to take a look at issues of human rights violations and assess the role of the National Human Rights Commission and the draconian AFSPA. APN channel did an in-depth show on the issue, which was moderated by its Editor-in-Chief Rajshri Rai. 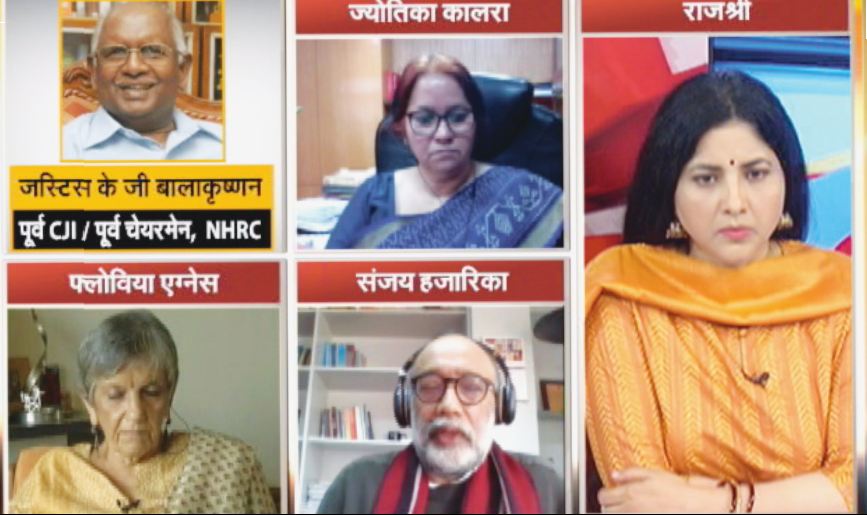 This year’s observation of the International Human Rights Day had a special significance for India. India got re-elected to the UN Human Rights Council for the sixth term with an overwhel­ming majority. Prime Minister Narendra Modi said that this is an endorsement of India’s commitment to the human rights cause. “We will continue promotion and protection of human rights through ‘samman, samvaad and sahyog’,” he said.

However, the ground realities are quite challenging. Our presence in the UN body shouldn’t make us overlook the harsh human rights situation in the country.

Questions abound: Is there a climate for samvaad or dialogue to resolve conflicts? Are the laws being used in a repressive way? Is the policing apparatus responsive enough and is the National Human Rights Commission (NHRC) performing well enough to handle cases of violation, or is it stymied by its inherent limitations?

Currently there are many areas of concern. Unjustified arrests of journalists, incorrect application of UAPA , NDPS, etc and crimes against vulnerable groups… The list is long and disquietening.

Justice KG Balakrishnan, former CJI & former chairperson, NHRC, is, however, quite optimistic. He said: “India has got a fine track record of human rights. The NHRC is a powerful body in the human rights field. It has been doing effective work. It has five members and a large body of employees which look after its workings. The secretary of NHRC is the secretary to the Government of India. There are various secretaries of different grade to look after various fields of activity. The NHRC receives large number of complaints, so a big organization is necessary. If we compare our NHRC with that of other nations, we find that they operate with a smaller organisation. We place a greater importance to human rights protection.”

One major area of concern is operations of the armed forces in “disturbed area” and the consequent reports of human rights violations. Recently, 13 civilians were killed in the aftermath of an anti-insurgency Army action in Nagaland. This has again initiated the debate on the relevance of the Armed Force Special Protection Act, or AFSPA.

Sanjoy Hazarika is Director of CHRI. He is also the founder of the Centre for North East Studies in Jamia and CNES in the North East. He is also a former member of the Justice Jeevan Reddy Committee formed to review AFSPA. Hazarika has extensive hands-on experience of the contemporary situation in the North East. Speaking from his experience, he said: “Justice Jeevan Reddy Committee was set up by the then UPA government to review AFSPA and recommend changes. It was a unanimous report prepared after seven months’ deliberation. After extensive study in ground areas, we came to the conclusion that AFSPA has come to be hated due to application of the law. The Committee recognised that in an insurgency situation, security forces need protection. The committee had recommended processes to ensure this. There was also a suggestion to set up grievance cells which was to comprise security personnel, police and district administration officials. This was to ensure that relatives of the people apprehended can be assured of the whereabouts of their loved ones. It was supposed to be a contact point for the people with security and administrative officials in the disturbed area.

“The sad part is that 16 years have passed and still no government has taken a call on the recommendations. Conditions have changed in the North East in these 16 years. Insurgency has relatively subsided. There are a few underground organisations in some pockets and they are negotiating with the government. So omnibus law like AFSPA is not needed now. It should be noted that AFSPA was enforced in Nagaland in 1958 when it was not granted statehood. Statehood happened in 1963. The surprising fact is that Nagaland still doesn’t have a State Human Rights Commission (SHRC). It is a failure of the government to not pursue the state government to establish SHRC in a state which has seen the longest promulgation of the AFSPA. I suggest that now without delay SHRC should be formed.”

As per 2019 figures, in 23 states which have SHRCs, the post of the chairperson is vacant in 10 states. And many states are yet to form SHRCs. So how can human rights be protected? Jyotika Kalra, NHRC member, explained:

“Talking about setting up of SHRC, Section 21 of the Protection of Human Rights Act holds that the state government may set up the body of SHRC. It is clear that setting up of SHRC is purely the prerogative of the state government and the NHRC has no role in the matter. Moreover, the NHRC doesn’t even have a supervisory role over SHRC. It is quite autonomous. Moreover, the interests of vulnerable groups are also protected by the presence of the Backward Class Commission, the National Commission for Women, the SC/ST Commission, etc. These commissions are deemed members of the NHRC. The NHRC has a mere recommendary role. It can recommend to the government.”

When it comes to handling insurgency, the Army has been, most of the time, at the receiving end of human rights debate. Major General (retd) Rajan Kochhar defended the Army’s stand in strong words. He said: “The AFSPA is only for disturbed areas. The ground conditions are such that the security forces have to immediately take action. They can’t afford to go to the district administration to take permission to take action against insurgents. There are cases of direct attacks or ambush on security forces. To tackle such disruptive action, the AFSPA needs to stay in place.”

The NHRC had issued a notice to the centre and Nagaland government over the killing of civilians by the armed forces in the northeastern state. This is a good move under the limited role of the NHRC.

Jyotika Kalra said: “The NHRC has some provisions to deal with human rights violations by the army. So in the Nagaland case, the commission has taken cognisance of the situation. In the context of general violations, not much can be achieved by forming different agencies or bodies. Many commissions are in place so no need to form new commissions. Of the total complaints received by the NHRC, 50% relates to women and child. In the courts, complaint cases take a long time to resolve, but in the NHRC immediate action is taken.”

Section 19 of the Protection of Human Rights Act, 1993, limits the NHRC’s role, except to seek a report from the central government, to make recommendations based on such reports and publish these documents.

“It is good that the NHRC has taken a lead in the Nagaland case and has asked the central and the state government to take action. The NHRC must push, challenge and demand for the setting up of SHRC. It is an established provision of law that though the state can undo the ‘disturb area’ tag, the centre can override it. The chief minister of Nagaland has said that the AFSPA needs to be removed. The people of Nagaland and Manipur are coming out to work in other places in India. We should engage them and keep them in the mainstream. People are saying that the peace process is delayed. But all said and done, it is better to have a delayed peace process than no peace process at all.”

Justice Balakrishnan placed the concern of the NHRC on the table in a wider context. He said: “Cases of human rights violations should come under the AFSPA. The armed forces are not in the purview of the NHRC. There is a separate mechanism to deal with human rights violations in the armed forces. The NHRC can’t call for the repeal of the AFSPA. We can’t recommend withdrawal of the AFSPA as we don’t know the ground realities. Maybe underground rebels will resort to violence if the AFSPA is removed. So unless we know the ground situation we can’t comment, we can’t put people in jeopardy and bring them misery. Talking about the general human rights violations in the cities, the police takes care of violations but in the rural areas it is neglected. The NHRC has taken the task of finding out the extent of such violations. It has been setting up camps in rural areas to help people.”

Apart from the AFSPA, there are other areas of concern. Flavia Agnes, advocate and social activist, said: “Many child and women specific acts were promulgated but their implementation is not satisfactory. Crimes against children and women are still a matter of serious concern. Look at the case of Sudha Bharadwaj. She had been incarcerated for three years, only now she has been released on bail. Women rights have to be considered in an overall perspective and should not be just limited to gender-based violence, sexual exploitation and rape. Also look at human rights violations by the State. The State has denied people their human rights. The release of Bharadwaj is good omen. But the fact is that women largely are not fully protected. India is sliding down in the human rights scale globally and this augurs extreme concern.”

On the face of all the complaints, Justice Balakrishnan had the last word. He said:

“NHRC is a recommendary body, it doesn’t have penal powers. It looks into the type and extent of human rights violations and recommends action. Ninety percent of complaints of the NHRC is complied by the State. So, where is the question of failure?”

Clearly, the NHRC has statutory limitations. More often than not, it is also seen to be playing safe or toeing the government’s line on important issues. The NHRC should be more pro­active in its response. It should place the problems in front of the government, forcing it to tackle them.