The searing image of a child with his dead mother on a railway platform has shocked the nation, and the world. It has also exposed how truth gets lost when it comes to responsibility and transparency 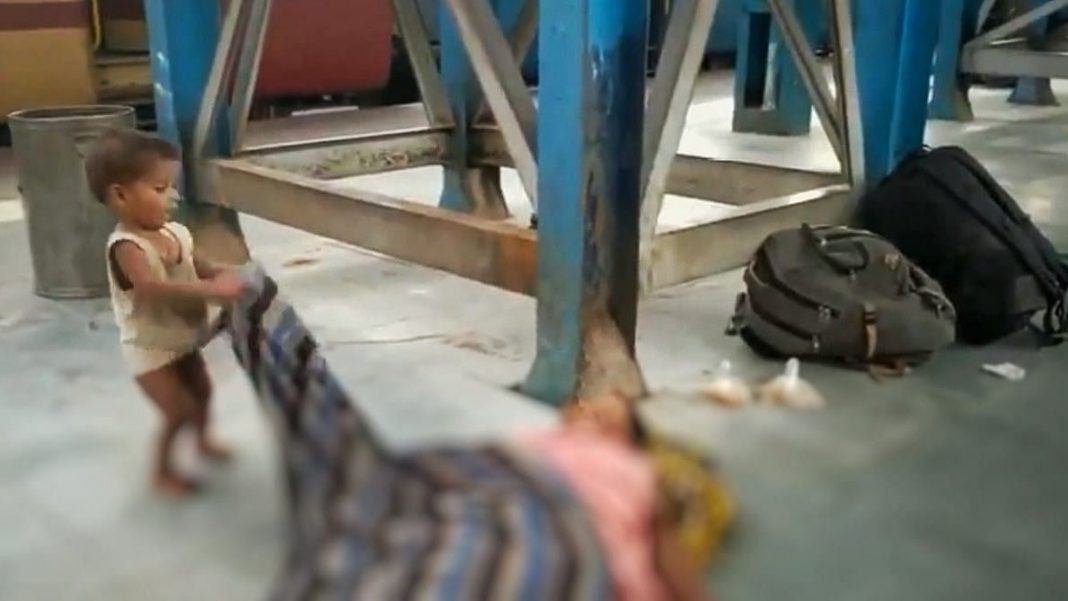 The migrant crisis triggered by the Covid-19 pandemic is the worst humanitarian tragedy seen in India since Partition. Nothing illustrates that more than the heartbreaking video of a toddler trying to wake up his dead mother on Bihar’s Muzaffarpur railway platform which has gone viral across the world. The mother and the child had arrived at the station on one of the migrant trains from Ahmedabad. Initial media reports said that the mother, Arvina Khatoon (23), died of heat, thirst and hunger as passengers were not served food or water inside the train.

Railway authorities were quick to deny the reports. East Central Railway tweeted that Arvina had a health issue which was the reason for her death. Their denial, on May 27, was backed by the newly-introduced fact-checking wing of the Press Information Bureau (PIB) which termed the media reports “incorrect” and “imaginary”. According to PIB Bihar, Arvina was suffering from an illness before she boarded the train and this was corroborated by her family. In an earlier tweet, the PIB Fact Check section had stated that the cause of the death cannot be determined without an autopsy. PIB did not provide any details on the alleged statement by Arvina’s family members or the type of illness she was suffering from.

India’s most credible fact checking platform, Alt News, has put out a report based on investigations by their reporter, Pooja Chaudhuri, which separates fact from obfuscation and makes for fascinating reading. Alt News’s report says that Arvina came from a poor family from Srikol village in Katihar district, Bihar. She is survived by her parents and six sisters, three of whom are yet to be married. Living under the same roof, the family barely managed to make ends meet. To add to the hardship, Arvina’s husband divorced her about a year ago. To support her two children, she moved to Ahmedabad, with her children, to work on a construction site where one of her sisters and her brother-in-law were employed. Following the lockdown, Arvina and her family members in Gujarat lost their jobs and were running out of money. On May 23, they were finally able to board a special train from Ahmedabad to Katihar. However, Arvina passed away during the journey on the afternoon of May 25. This was about two hours before the train reached Muzaffarpur station.

After her death made headlines and the video went viral on social media, the authorities were quick to cover up the tragic event. While PIB claimed that Arvina was previously ill, others shared a police complaint allegedly filed by Arvina’s brother-in-law, Mohammed Wazir, who was travelling with her on the train. The complaint stated that she was seriously ill, physically and mentally. However, JDU’s Rajiv Ranjan Prasad released a video where Wazir can be heard saying that they were given food in the train and denying that Arvina was suffering from any illness. The BBC also quoted Wazir as saying that they were given a meal once during the day and served snacks and water at intervals. He told BBC too that Arvina did not have an existing medical condition.

In order to get at the truth, Alt News contacted various individuals who live in the vicinity of Srikol village where the family comes from. The Vice-President of All India Student Association, Bihar, Kazim Irfani, agreed to pay them a visit and ask a list of questions prepared by Alt News. Speaking with Irfani, Wazir gave a different statement than the one he had given to BBC and claimed that they were not given food and water in the train. However, he maintained that Arvina was not previously ill, consistent with his statement to BBC and the video posted by JDU’s Rajiv Ranjan Prasad.

However, the official complaint filed at Muzaffarpur police station states that Arvina was both physically and mentally unwell. When asked if Wazir had written the complaint himself, he said that he cannot read and write but only knows how to sign his name. The police complaint carries his thumb impression. A policeman had written the complaint on his behalf. However, it wasn’t read out to him before his thumb impression was taken, said Wazir. He reiterated that Arvina was not psychically or mentally ill. In a phone conversation, Wazir told Alt News that his initial statements were haphazard because he was in a distressed state of mind: “She (Arvina) had just died and they were asking questions. I said whatever came to my mind.”

However, Wazir was not the only person accompanying Arvina. A video statement was given by Arvina’s sister and Wazir’s wife, Kohinoor Khatoon, who was also on the Shramik train from Ahmedabad. She said that Arvina did not complain of any illness when they left, adding that she “was yearning for water” in the train. While Wazir stated that Arvina had eaten before taking the train, Kohinoor said she had not. However, both stood their ground that she was not unwell at the time of boarding.

Kohinoor further said that they had visited a doctor for a check-up before they got on the train and the examination found that Arvina was fine. Wazir made a similar statement in a phone conversation with Alt News. This is an important aspect of the story because as per government guidelines, only people with no Covid-19 related symptoms are allowed to travel on the special trains. Since Arvina was allowed to board the train, it is evident that she did not have any such symptoms.

Even if she was suffering from a long-term disease, PIB does not specify the type of illness serious enough to take her life, neither were any medical records shared. The government did not conduct a post-mortem of the body that would’ve ascertained the cause of death. If media reports that Arvina died of heat, starvation and dehydration are discounted because, according to Railway officials, only an autopsy can determine that, how then can the government assert that she “did not’” die of the above mentioned reasons?

Alt News also spoke to another one of Arvina’s sisters, Parveena, who confirmed that she did not have an existing ailment. Her father, Mohammed Nehrul, said the same. His statement says: “She wanted to take care of her children and had shifted to Ahmedabad. It had been eight months but in the last two months, she had trouble making ends meet and borrowed about Rs 3,000 for food.” He added that they had spoken to her half an hour before she had boarded the train when his daughter told him: “We are all okay, don’t worry. We are going to get on the train.” The family found out that she had died after Kohinoor called and informed them.

Mohammed Nehrul was also contacted by NDTV. He told the channel that Arvina could go to Ahmedabad and work “as she was mentally and physically sound.” Arvina’s mother gave a similar account. She too said that Arvina wasn’t sick and wanted to come back home because the lockdown had rendered her jobless. A local journalist from Katihar, Dainik Bhaskar’s Noor Parvez, had visited the family a day after Wazir and his wife returned with Arvina’s children. Parvez told Alt News that the family members informed him that passengers were not given food in the train and Arvina was not suffering from any illness before boarding.

Alt News contacted Dr Sylvia Karpagam for her medical opinion on the death of several migrant workers travelling in Shramik trains. Dr Karpagam is a specialist in community medicine with over 15 years of experience. She has worked in “Right to food” and “Right to health” campaigns. She supports lawyers in looking at post-mortem reports in medico-legal cases. She stated: “These deaths of migrant workers in trains cannot have a single reason. The post-mortem should include underlying causes and pre-existing conditions as well. Even if some of the 80 people who have died had an existing medical illness that is just one factor. The question is what aggravated the problem which caused them to die on the train. The problem of poor nutrition is already there in the country. This affects the poor migrant workers more than most people and they often do not have reserve stores of energy. During the lockdown, this became worse as we have seen that they have been driven to travel long distances by foot because they had nothing to eat as their incomes were suddenly lost.”

Dr Karpagam further added: “On top of food deprivation, you have dehydration due to the long journeys in hot weather. If hydration was ensured, this could have prevented many of the deaths. Some already sick and starving patients could still have been saved if they had good access to water. Dehydration is more deadly than starvation. These people clearly suffered both. First the heat exhaustion sets in and given the duration of the journey, this can easily become a heat stroke. Heat stroke is a medical emergency and can only be handled in good hospitals. This could not have been addressed in the train by anyone but easily prevented by ensuring adequate water supply for everyone at the very least.”

Railway Minister Piyush Goyal recently claimed that all deaths in trains were due to pre-existing conditions. However, Dr Karpagam pointed out that people with chronic conditions fly and travel in trains all the time. “Doctors allow their patients to do that with the necessary precautions. They don’t just die at the end of long journeys in such large numbers. The people with chronic conditions are usually aware of their issues and would do what they can to take care of themselves on a long journey. But if they have died in such large numbers, we have to consider the effects of starvation, hypoglycemia (low sugar) and dehydration on top of the medical issues and prolonged starvation during the lockdown they were already having.”

The tragic incident raises a lot of questions, none of which were cleared by either the Railways or PIB Fact Check.

In conclusion, there was no evidence provided by Railway authorities that Arvina Khatoon died of a pre-existing condition. Furthermore, PIB Fact Check, which has emerged as the latest tool for bullying journalists and media organisations, did not do a thorough fact-check. In fact, PIB’s investigation into the death of a migrant worker was barely two sentences. In contrast, it took Alt News almost a week to establish the facts.

Did you find apk for android? You can find new Free Android Games and apps.
Share
Facebook
Twitter
Pinterest
WhatsApp
Previous articleWife Is Entitled To Maintenance Even If She Earns: Bombay HC
Next articleNGT Orders Committee To Look Into Telengana Minister’s Farmhouse Built In Restricted Zone