Access to justice is a solemn guarantee which the Constitution promises to citizens of India. However, even after 75 years of independence, it is still an unrealized dream. The India Legal show on APN News channel, hosted by the channel’s Editor-in-Chief Rajshri Rai, brought together a panel of experts to discuss the issue. A report 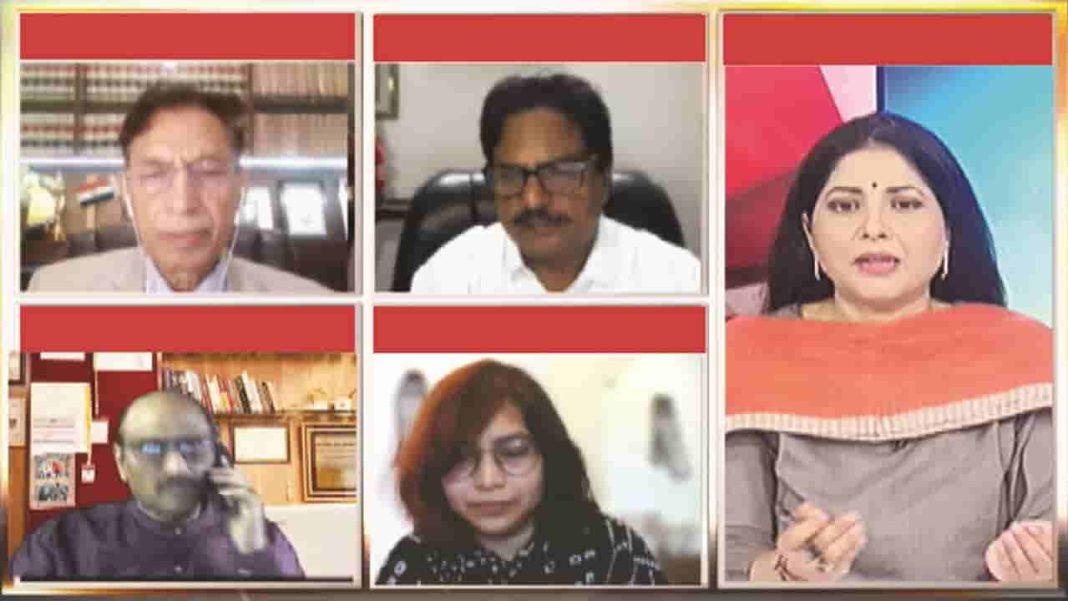 Prime Minister Narendra Modi has recently described Ease of Justice as important as Ease of Living and Ease of Doing Business. The tragedy is that even after 75 years of independence, providing justice to the people still remains a big challenge. Article 21 of the Constitution guarantees fundamental right to life and liberty; access to justice is one aspect of this fundamental right. In Anil Rai vs State of Bihar, the Supreme Court has said that if people don’t get justice or if there is a delay in getting justice, then it is possible that the trust on judiciary will be dented.

Justice Bhanwar Singh, former judge of the Allahabad High Court, said: “The legal system is facing the onslaught of many problems all at one time. There is lack of court infrastructure. Paucity of judges is impacting hearings. Apart from this, as Justice Chandrachud said, advocates demand stay for their cases. This needs to be curbed. As per court procedure, even if one judge of a two-judge bench objects to granting a stay, it can’t be granted. As per another court norm, the bench can cancel demand for a stay. So stay demand should be discouraged. We have to increase the number of judges.

“It reminds me of Martin Luther King’s words: Injustice anywhere is a threat to justice. We have to rework the norms for judges appointments. Special focus should be on the district courts as they are the backbone of the judiciary. As government is the biggest litigant, it should withdraw cases as and when necessary and possible.”

The Indian courts are not at all litigant friendly. The court procedures are long-winded and outdated, the court language is outlandish and complex and the long haul of hearings make the process expensive. It is a classic case of justice delayed.

Ankita Sarkar, legal strategy coordinator, Fair Trial Fellowship, NLU Delhi, spoke from first-hand experience. She said: “Court proceedings are so complex that laymen can’t understand them. The poor and the village folk are totally at sea as they witness the hearing of their own cases. When their advocates explain, they can comprehend a bit. This is a helpless situation. Legal illiteracy makes the thing worse.”

At this point, it is apt to recall what President Droupadi Murmu had said when she had attended the APN’s Jharkhand India Legal Conclave on “Access to Justice”, a few years ago. She was then holding the post of Governor of Jharkhand. She had said: “I have roots in the village. I understand villagers’ problems and apprehensions. The village folks are afraid to approach hospitals, police stations and courts. They know that if they go to a court, hearings will be prolonged, they will get date after date, and whatever money they have, will be spent. This needs to be remedied, only then access to justice can become a reality.”

Clearly a law apparatus which fails to reach out to the deprived sections of the society is dysfunctional. To provide access to justice at the grassroots level, in 1986, the Law Commission of India, in its 114th report, had recommended to the central government to establish village courts (gram nyayalayas). Twenty two years later, Parliament enacted the Gram Nyayalayas Act in 2008. Since the enactment of the law, only 395 gram nyayalayas have been established, while the law provides for the establishment of one or more gram nyayalayas for each panchayat at the intermediate level. So much for rural empowerment.

Suresh Chandra, former law secretary, said: “Gram nyayalaya is a segment which we should consider quite carefully. It is a part of the federal structure. However, judgments of gram nyayalayas should be carefully assessed. It should also be noted whether gram nyayalaya judgments are enforceable or not. It will be good if the gram nyayalayas take up smaller matters at the local level and dispose them of. It will help to ease the workload of the district and High Courts.”

Efficiency of the judicial system is also at a premium. The court accepts one out of every five appeals that come before it, which is 20% of the total cases. Due to this, the workload on Indian judges is definitely more and this needs improvement. Furthermore, the efficiency of judges must increase. The case disposal rate has stayed between 55% and 59% in the Supreme Court, at 28% in High Courts, and at 40% in subordinate courts.

Chandra said: “Our judicial system has four components—first, values and virtues which are enshrined in the Constitution like equality, liberty and justice. Second are the rights and obligations of individuals, institutions and corporates enshrined in over 5,000 statutes. Third is the overall mechanism or judicial set up and fourth is correction; correction of malfunctioning of institutions enabled by dispute resolution mechanism. It is here that we are failing. The people manning the dispute resolution mechanism are not fully trained at the executive level. This has led to burgeoning of cases.”

Justice Singh added: “I agree with Sureshji that there is a lack of competence of judges and this is impacting negatively on the case disposal. This is a phenomenon mostly occurring at the district level courts. Some incompetence is also found at the High Court level. However, the judges of the Supreme Court are very hardworking and competent and come very much prepared. At the district level courts, there exists quotas also.”

Backlog of cases implies miscarriage of justice. Important questions of law do not receive timely answers. Important constitutional law cases, many related to basic citizens’ rights have been on the backburner for years. In criminal cases, delays impact investigation and add to undertrial woes.

Sarkar, who has extensively worked with the undertrials, said: “Undertrials face systemic issues and are caught in its vortex. As per our study, 55% of the undertrials don’t have any bail application filed in courts, however charge sheets have been filed. This is an anomaly. In private practise, with the filing of a charge sheet, a bail application also gets filed. Twenty seven percent have received bail orders, but still they haven’t been released. The surety amounts are very nominal, say Rs 1,000. Yet for lack of even this amount, people are in jail despite bail orders. We work in the area of undertrials, but such is the complexity of the system that out of 700 release orders, we have managed to get only 117 released or get compliance. To be able to provide succour to undertrials, we need to work beyond the existing system and operate via jail clinics, paralegal volunteers and data digitization mechanisms.”

Justice DY Chandrachud had recently called for a change in the way lawyers work in the Supreme Court, asking them to realise that the Court’s time is valuable. The judge made the remark when a lawyer appearing before him sought adjournment in a case. He said: “You have to change the style of working in the Supreme Court. Judges read briefs and then lawyers don’t argue. Lawyers complain that matters are not listed, but seek adjournment when their cases come up.”

Dr GV Rao, senior advocate, Supreme Court, said: “There are certain flaws in the system. The advocates frequently ask for adjournments and many times the advocates try to prolong the hearing by resorting to long winding arguments. This wastes courts’ valuable time. Such practices should be dissuaded. In the American court system, weightage is given to written submissions and only a fraction of time is devoted to arguments. If we adopt the American system, we can manage time well and also have clarity on the case.”

Access to justice is closely related to free legal aid. As formal arms of the judiciary can’t reach the underprivileged, pro bono efforts of lawyers and NGOs adds immensely to the justice efforts. Rao suggested: “In the promotion of free legal aid, private companies can play an important role. They can use corporate social responsibility (CSR) funds to push free legal aid. CSR is a necessary spend for companies and attracts tax rebate. This provision can be gainfully used by firms to promote social justice and deploy advocates to facilitate free legal help to the needy.”

Sarkar added: “It is not only the question of providing free legal aid to the needy. The quality of legal aid should also be up to the mark, at par with what private lawyers provide. One way to upgrade free legal aid is to involve law students in the process. Not that they would argue cases, but they can well take part in the outreach process. This can make access to justice effective.”

Special courts and fast-track courts have also been included in the justice delivery system to facilitate speedy justice. As per the Department of Justice’s website, the 14th Finance Commission had recommended the setting up of 1,800 fast-track courts during 2015-20, dealing with cases of heinous crimes. More than 33 lakh pending cases have been disposed of by the fast-track courts since 2014. However, the harsh fact is this—the pendency of cases in fast-track courts has crossed the 10-lakh mark, as on December 2021, defeating the very purpose for which these special courts had been created.

For pendency to decline, the disposal rate should be fast. Under the existing conditions of manpower and infrastructure, we have to look for innovative ways to accelerate the disposal rate. Mere increasing the number of judges may not work. As per a 2008 study, judicial productivity in Delhi district courts is about half of that in Australian courts. Justice Singh concluded, “One way to make the existing judicial apparatus efficient is to go in for double shifts. This way we can utilize the existing manpower and facilities and double the output.”

Access to justice is a solemn guarantee which our Constitution promises to the citizens of India. A mammoth judiciary with its work practice being more than a century old and based on a foreign model needs to be slowly and rigorously refurbished so that it comes in tune with the demands of the current-day India. The powers that be shouldn’t hesitate to bring radical changes in the judicial ethics and practices, infrastructure and manpower, if access to justice is to become a reality.

Did you find apk for android? You can find new Free Android Games and apps.
Share
Facebook
Twitter
Pinterest
WhatsApp
Previous articleRight to Die
Next articleInstitutions should blend our historical baggage with a futuristic vision to equip young minds to transform society: CJI NV Ramana