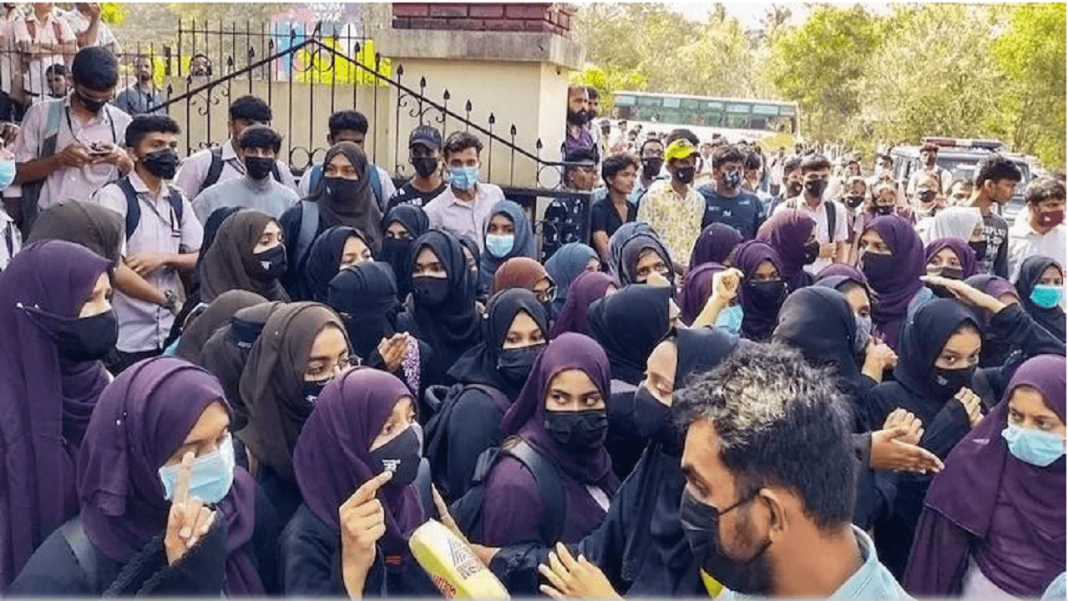 The full bench of the Karnataka High Court will continue hearing on a batch of petitions challenging the hijab ban in educational institutions by the state government. The matter is before a bench comprising Chief Justice Ritu Raj Awasthi, Justice Krishna S Dixit and Justice JM Khazi. Earlier on Monday, senior advocate appearing for petitioners, told the High Court that government can’t restrict fundamental rights in the garb of maintaining public order as he sought permission for Muslim girls to wear hijab in schools and colleges.

The full-bench had last week given an interim order that no religious symbols are allowed for the students in schools and colleges until the final order of the court, thus barring the use of both hijab and saffron shawls in the school and college premises. The hijab row which started last month in Udupi Pre-University College by six girl students has snowballed into a major controversy in the country.

The College Development Committee (CDC) has no legal statutory basis to frame rules on uniforms.

“The government’s decision in this regard shows a lack of wisdom and a legislator heading the committee will decide on fundamental rights. It is not legal to restrict the wearing of hijab,”

In India Wearing a hijab is an expression protected under Article 19(1)(a) of the Constitution which guarantees the right to freedom of speech and expression. Constitutionally, a right under Article 19(1)(a) can only be limited on the “reasonable restrictions” mentioned in Article 19(2). The question is -Whether the norms and rules framed on uniform by The College Development Committee (CDC) is a reasonable restriction?

Sri Lanka became the latest country to ban veils all forms of face veils in public places “due to national security concerns” as part of government legislation that took effect on 29 April 2021. The wearing of burqas was temporarily banned in 2019 after Easter Sunday suicide bomb attacks killed more than 260 people.

Contemporary India is entering the uncharted territory of grave danger, of which the hijab issue is only the most outwardly inconsiderable recent instance. The hijab controversy has gone viral globally as a violation of human rights the moment it occurred. There is an acknowledgement that it has been deliberately orchestrated to influence the Uttar Pradesh elections and in other poll bound States.

The predictable outcome of the hijab controversy is that the authorities in India, though not directly involved in a local school dispute, will be forced to intervene to make concessions and compromise over the issue of the hijab. But it should be noted that bowing on this issue will constitute a serious setback with much larger consequences because it will confirm the political muscle of extreme groups using it to demonstrate their ability to hold the entire system to ransom. This is already the case with loudspeakers broadcasting the azan and namaz blocking major thoroughfares, including the national highways.-Say a section of political pundits.

The Hijab controversy that initially erupted from the coastal area of Karnataka seems to have become a major political issue all over the country with activists taking rigid positions that would complicate matters even further. The row has been kicked up when the poll process for Assembly polls in five states has commenced and is helping divisive forces on both sides to consolidate their vote bases. It has been an age-old practice in many parts of the country where women belonging to all faiths, cover their heads because of the prevalent social customs.

Having studied in Kashmir and practising Law in Delhi and other State High Courts it has been a practice that girl students belonging to a particular religion would arrive at the Education institution premises clad in Burqas/hijab since they would not be permitted to travel without it, to acquire higher education by their orthodox parents but once inside the Gate, they would take off their Burqas/headgears
in a room meant for this purpose and enter the premises in their Salwar Kameez or any other attire. They would attend all their classes and spend free time in the the premises.The educational institution in North India, never permitted the students should misconduct themselves on these norms. The Burqa or hijab was never an issue that was objected to by anyone and it is an acceptable norm.

What seems to be happening is that the controversy has been kicked up because the matter has assumed religious overtones. There is no bar if the girl students arrive wearing a Hijab and once inside the precincts of an educational institution, they must adhere to the prescribed uniform code. Where no such dress restrictions exist, there should be no problem whether anyone is wearing any sort of headgear. Parallels are being drawn regarding the turbans worn by Sikh boys in schools. In virtually every school, the Sikhs are allowed to wear the turban which matches the colour of the uniform and no controversy has ever arisen regarding this. In rural India, in many parts women belonging to every faith, not only cover their heads but their faces also. This is a social custom even if it is gender-specific.

Of course, every person has the right to choose his or her attire but in an educational institution, one has to follow the rules if such rules exist. It is not a mere coincidence that the Hijab row has erupted when the Assembly polls are on and an attempt to polarize votes on basis of religion is sought to be made. Wearing the Hijab is a compulsion for many Muslim girls if they have to attend college. Otherwise, they would be deprived of education since their families may not permit them to step out of their homes without the headgear.

The wearing of Veil and Hijab is not “is not mandatory in Islam,”

“While this may be the belief of the orthodox and patriarchal clerics, any number of modern-day Islamic scholars, men and women, rightly maintain that hijab has nothing to do with the teachings of the Quran and the Prophet. The veil, in other words, is not mandatory in Islam,”

The matter has to be understood keeping in mind all the sensitivities that go with it. In the liberal, modern and enlightened times we live in, such matters should not crop up and emphasis should be on larger issues that concern the better quality of life.

People of all religions in India have utmost faith in the wisdom and intellectual integrity of the Judiciary,and I as a Law Practitioner believe that the Judiciary shall live up to the trust and confidence of the citizenry and uphold the dignity of the women,rule of law and promote the societal equanimity that is fundamental to Constitutionalism.

Hopefully, the issue would be amicably sorted out by the judiciary and calm and peace shall be restored not only in Karnataka but other parts of India as well.

The author is a Senior Advocate, Supreme Court of India.