“Musings from My Desk”: Hari Jaisingh 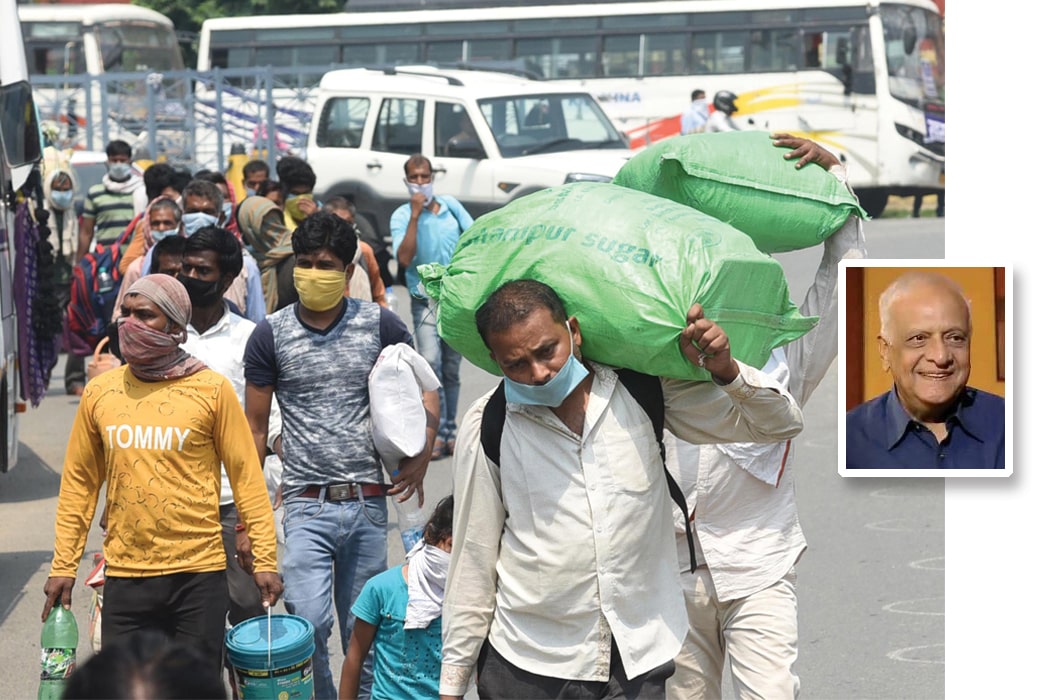 Hari Jaisingh is a highly respected journalist and author with a distinguished career spread over 38 years. He has worked in senior positions with several leading Indian newspapers, including The Tribune (as Editor), The Indian Express, National Herald and, the Business & Political Observer. As a keen observer of Indian and global developments, Jaisingh writes a regular blog called “Musings from my Desk” on burning issues of the day.  We reproduce his latest piece on migrants:

How about the migrant workers’ Mann ki Baat!

The moot question is: do we have leaders of the Sardar Patel class today? The answer is a simple ‘no’. What is the reason for this sorry state of affairs? The answer again is simple: in place of frankness, we either see ‘golden silence’ or sycophancy.

Most people in Prime Minister Narendra Modi’s establishment seldom express their views on crucial matters in the prevailing atmosphere in the polity. Safety first! This is the order of governance today.

The lopsided management of lakhs of migrant workers wishing to return to their villages in the absence of jobs and any means of livelihood tells us the story of their plight. I have discussed at length in my earlier columns the heart-wrenching sight of migrant labourers with their wives and children heading towards their villages in UP, Bihar, Chhattisgarh and other states during the days of extreme summer.

The government authorities belatedly realized their pitiable conditions and got into action by organizing buses and Shramik Special trains. I am, however, disturbed by the way the railway authorities have handled the whole exercise. The question here is not of the number of trains operating. Nor am I surprised about the game of petty politics between the Centre and the states as reported in the media from time to time. These reports put even Railway Minister Piyush Goyal in poor light. Today, he talks about over 250 trains that could not get enough passengers. He is good at blame games and holds the states responsible for failing to arrange for passengers to get to the station. This is a reflection of the lack of coordinated efforts between the Railways and the states.

It will be pertinent to recall the observations of the National Human Rights Commission (NHRC) on the treatment of migrant workers. It states that the migrant workers’ treatment borders around barbarism. Leave aside the provision for food, I understand that there was no arrangement even for water during their long journeys home.

In its forthright remarks, the NHRC says that “the poor labourers cannot be treated in such an inhuman manner just because they are poor”. The NHRC statement further adds, “any shortcoming on the part of the government agencies cannot be covered under the excuse of unprecedented situation amid countrywide lockdown. The Commission has observed that the contents of the media reports, if true, amount to a gross violation of human rights. The aggrieved families have suffered irrevocable loss. The state has failed to protect the lives of the poor labourers”.

On the migrant workers’ sufferings, I wish to reproduce the observations by Human Rights activist Harsh Mander. He notes that “most men and women trudging or cycling home in dangerous journeys, dying on railway tracks or of hunger and exhaustion on trains without food or water, are between 15 and 30 years old. But for the accident of their birth, they could instead have been in high school or university studying online, or working from the safety of their homes, fighting boredom with an overdose of Netflix” (The Hindu, May 30, 2020).

I believe that the persons in authority do not care much for the poor and the have-nots, though publicly they shed crocodile tears. What we see today is an all-round deterioration in public life. The COVID-19 crisis and the economic downturn that has ensued have only made things worse.

I am surely happy to note the Prime Minister’s concern. He is well aware of the plight of migrant workers. He acknowledges that the migrant workers have suffered the most. My only regret is that the Prime Minister should have anticipated their problems early enough and made the necessary arrangements for them to return to their villages. Alas, the Modi government failed on this count. An early governmental response, following the imposition of the nationwide lockdown, would have spared the workers, and their families, avoidable sufferings on a massive scale that we have been seeing for the past several weeks.

Poverty may be made in heaven, but it is processed and reprocessed right here. The marketing of poverty is probably one of the most engaging occupations today, with or without packaging it in naked rawness.

Every type of deprivation as well as the luxuries of life, for that matter, have been seen, displayed, discussed and debated in government and public forums for over 70 years. Anti-poverty programmes have been launched at several stages of our history by different leaders with great fanfare. Still, the bitter truth is that the problem of varied types of poverty remains as acute as ever.

Poverty is no longer a socio-economic phenomenon. It is now entangled in politics and has become a potent weapon in the hands of political masters and their cronies. Poverty certainly is the most exploited commodity today. So are the millions of poor workers in various categories who dot the Indian landscape with their miserable existence.

The structural reforms introduced in the agriculture sector and the economic package announced on June 1 for MSMEs, farmers and street vendors, are intended to improve the lot of the migrant workers. However, alongside these bold intentions, there is also a crying need to strengthen the implementation.

The Prime Minister, in his May 31 Mann ki Baat address, spoke of the humanitarian crisis facing the migrant workers, who, he has said, have borne the brunt of the COVID-19 pandemic. He said, “It has also brought to the fore the vulnerability of our Eastern states whose labour has contributed to the building of our country and who have the potential otherwise to be the economic engine of the country. There are many lessons to be learnt from this situation to improve our future”.

It is heartening to hear these words from the Prime Minister. However, I would like to see how he translates these words into a plan of action for an egalitarian society of the India of the future. I expect him to work out a new post-COVID-19 blueprint for tomorrow’s India, with specific focus on a social protection framework for migrant workers and their families. I believe that such a socio-economic blueprint would make all the difference between the India of yesterday and the India of tomorrow.