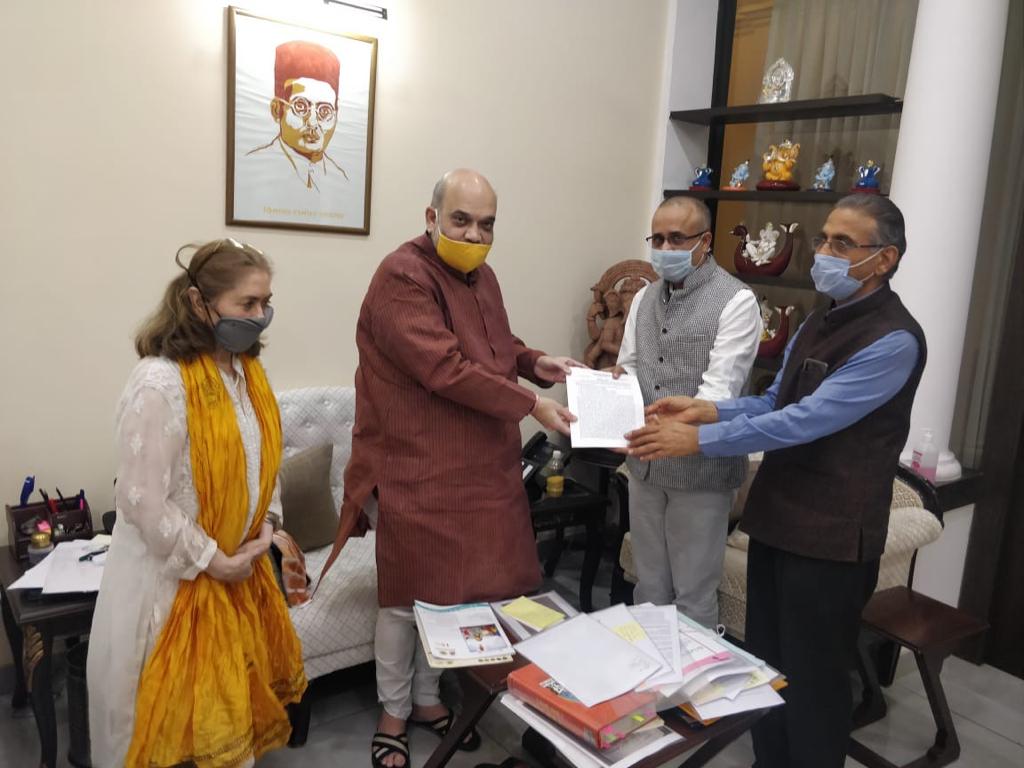 A Delhi based NGO, which probed the Delhi riots of February this year, has come to the conclusion that the ‘tukde tukde gang‘ were hand-in-glove with various radical groups such as Pinjra Tod, Jamia Coordination Committee, Alumni Association of Jamia Milia Islamia, Popular Front of India (PFI), Bhim Army, and local MLAs along with the IS (Islamic State) and other international terrorist organisations, and they were behind the horrific violence that killed 59 people and left people from over 200 families injured.

The NGO, ‘Call for Justice’ handed over the ‘fact finding report’ to the Union Home Minister Amit Shah at his residence in New Delhi.

The six-member team comprising of a retired high court judge, IAS officers, and doctors visited the riot affected areas of Yamuna Vihar, Bhajanpura, Chandbagh, Brijpuri, and Shiv Vihar areas and concluded that the riots of North East Delhi were a pre-planned conspiracy. The Call for Justice trust, looking at the nature and seriousness of the communal tensions and in order to prevent such incidents in future and to promote confidence-building in community, constituted a Fact- Finding Committee consisted of persons of eminence and impeccable integrity, which consisted of following members:-

The New Delhi based NGO published its report on the North East Delhi riots which took place during 23.02.2020 to 26.02.2020. The said report is prepared by a Fact Finding Committee constituted by the aforesaid, and has adopted a holistic approach covering the riots from various perspectives including but not limited to the collection of information from the victims, Eye-witnesses, local leaders, residential welfare committee, places of incident, and the social media.

The report has published detailed insights on the timeline of activities, relevant and incidental issues, protests against the CAA, financial support by the political parties, pre-planned conspiracy of riots, role of the internet, social media and finally, the recommendations made by the committee to avoid future occurrence of such tragic events.

In the said report, the committee has stated that it has interviewed the victims and eye-witnesses and collected audio-video recordings from them. It has also carried out field visits to some of the most affected and damaged localities and also compiled relevant & contemporary material in the form of videos, photographs, screenshots, messages from the social media platforms including Twitter, Facebook, Instagram, You Tube, etc.

The report says that, after passing of The Citizenship Amendment Bill in December, 2019, a wave of protests gripped the nation and a couple of months later, New Delhi was in the headlines for large scale violence, reportedly triggered by clashes between anti-CAA and pro-CAA groups in the North-East Delhi, all while the President of the United States was in the city for a bilateral visit.

The unresolved socio-political issues pending for prolonged periods which were eventually resolved including Triple Talaq, Article 370, and the Ram Janmabhoomi during 2019 which somewhat brought out the anger simmering in several radical groups, which were working against the interests of India and its people. The report however says that the CAA did not have any adverse ramification on any citizen of the country irrespective of cast, religion or community and the anti-CAA radical groups were losing ground amongst the public and therefore, to keep the issue burning, a series of narratives using multiple platforms, targeting different classes of the society, were spread in a synchronised manner which ultimately pushed the Muslim community into a corner and then, through mobilisation of resources, financial, manpower & others in a concerted manner, Muslim in the North East were pushed into riots.

Various radical groups such as Pinjra Tod, Jamia Coordination Committee, Alumni Association of Jamia Milia Islamia, Popular Front of India (PFI), and the local politicians from AAP, suddenly, after election in Delhi, accelerated misinformation, hate speech campaigns using Anti-CAA as a basis. Since people in these areas are not much educated and also poverty ridden, members of these groups penetrated into the community and started campaigning in small groups, brain washing, programming and wiring them to achieve their illegal designs.

In the said report, it is stated that in order to augment the hate speech narrative and map it with emotions, fear and religion, these radical groups managed to get the narratives delivered from the Mosques in daily meetings through Imams and also through the Azaan, broadcasted from loudspeakers in these localities multiple times daily.

After pre-planning and organising, these radical groups executed the attacks using heavy quantities of stones, petrol bombs, catapults, country made guns, acids packets, etc. It was found that during the violence and subsequent riots, the Delhi local populace was joined by a large number of outsiders of approximately 7000 people who were of 15-35 years of age group. . The Bhim Army also joined hands with these groups and mobilized their community to join anti CAA protestors by mingling the issue of reservation in promotion with the anti CAA protest.

The campaign of Anti CAA Protestors was losing its relevancy and significance among the local public and it was moving towards failure. On 17.02.2020, one of the members of the tukde tukde gang, namely Umar Khalid, incited the public to take to the street on February, 24th 2020, at the time of arrival of US President, Donald Trump. This indicates that by that time, the planning & organizing of attacks in furtherance of a conspiracy had already taken a shape and these radical groups were in process of mobilization of resources.

Financial aid to protestors and rioters

With respect to financial support, the fact finding report has relied on Enforcement Directorate’s report which stated that the anti-CAA protests were funded by the Popular Front of India (PFI) and the leaders of Congress and the Aam Aadmi Party were in touch with the PFI chief and Rs. 120 crores were deposited in 73 bank accounts related to the PFI for execution of the anti-CAA drive. The report revealed that the PFI spent about 120 crores in a month to orchestrate violent riots in the country and also names eminent lawyers Kapil Sibal, Indira Jaisingh and Dushyant Dave as the beneficiaries of PFI funding. Further, since the Citizenship Amendment Bill was passed in the Parliament, over one crore rupees were deposited in the accounts of PFI and its related organization Rehab India Foundation. The deposits ranged anywhere between 5,000- 49,000 to avoid detection.

Ten months prior to the riots the PFI received Rs. 30 Lakhs as donation and out of the above mentioned sum, around 50% was received in cash. Out of the cash donations, approximately 60-65% was deposited in the bank and the rest was kept at PFI’s National headquarters at Shaheen Bagh. Between December 4th, 2019 and January 6th, 2020 an amount of more than 1.34 crores were allegedly withdrawn from the accounts of PFI, to be distributed among violent rioters to incite them. The PFI activists and members allegedly received cash from people all over India and gave it to their area specific handler, who travelled to Delhi and deposited the cash at Shaheen Bagh.

The report further revealed that PFI’s Delhi President, Md. Parvez Ahmed was in touch with AAP’s MP Sanjay’s Singh, and several Congress leaders including Udit Raj. He was also a member of WhatsApp groups such as ‘Unification of Muslim Leaders etc.’  Congess leader Udit Raj has accepted that Parvez was calling several parties, Muslim leaders and Dalit groups to unite against the CAA.

The report has stated that the Internet played a dominant role in the riots at every stage; including spreading misinformation about the CAA, manipulating narratives at pre-riots stage, flaming it during the riots as well as post the riots to misrepresent the Muslim community as the victim. In India, people have addiction to the social media and India has become the biggest market to WhatsApp, Facebook, Twitter, Instagram, etc. The narrative influencing power of the social networking websites has become one of the tools which is being used by all the communities, politicians, social workers, business class to spread their propagandas, ideologies, beliefs, and the internet has been developed as one of the most effective tools because of its power of instantaneous communication.

The conspirators behind the riots and the anti- CAA protests were cognizant about this fact and exploited the narrative power of the internet to spread misinformation, propaganda, and to influence the public to follow their propaganda. These were used by the radical groups from the inception to create false propaganda, spreading the same to the masses and also to manage, co- ordinate the protests as well as riots among the groups which were spread over a geographical area

Another reason which helps these conspirators to succeed in the manipulating narratives is the failure of the government to take any steps to control the misinformation campaigns through the regulators or controlling and directing the social Media. The government also did not launch any dedication program or initiative to counter the misinformation or to create transparency on CAA, particularly for the poor & uneducated classes as residing in the North East, Delhi.

The Committee, after preparing a detailed fact finding enquiry on Delhi riots of 2020, has suggested few recommendations to the government such as:

The author is an Advocate on Record, Supreme Court of India, New Delhi. Views expressed herein are personal.

Did you find apk for android? You can find new Free Android Games and apps.
Share
Facebook
Twitter
Pinterest
WhatsApp
Previous articleSet Up Three Members Committee In Every District For Smoother Functioning Of Quarantine Centres: Allahabad HC To Govt.
Next articleDelhi Court Grants Interim Bail To A Man Accused In 302 IPC: COVID-19