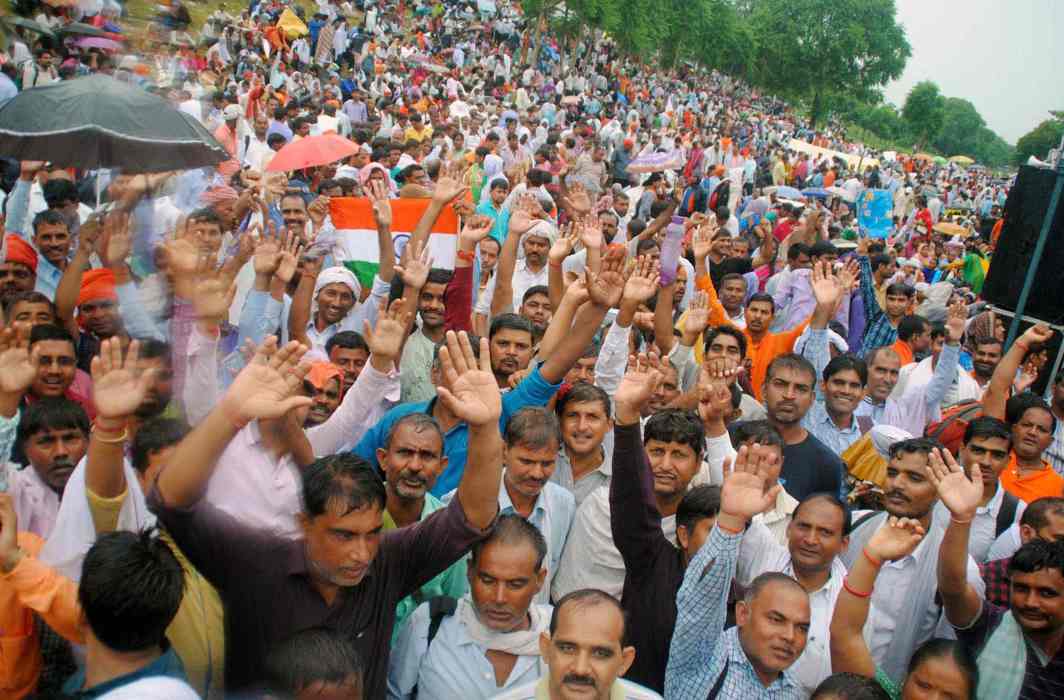 Above: The shikshakarmis’ agitation for a place on the rolls has finally borne fruit. They have been on strike in many states across the country

In a move set to add a Rs 15,000 crore burden annually, the government has regularised 1.36 lakh contractual teachers. This has opened a Pandora’s Box as those left out have gone to court

It’s not infrastructure, books or midday meals that will make a child turn to school and academics. The most important ingredient is the teacher. If the teacher is good, then children learn and adapt faster. Chhattisgarh has put that theory to test as it has regularised more than 1.36 lakh teachers who were hitherto known as shikshakarmis. A total of 1.03 lakh of them have already been accommodated and another 25,000 are likely to get the okay soon.

These shikshakarmis had been recruited by the Digvijaya Singh government in 1997-98 in united MP. The entry-level qualification was so low that several thousand school dropouts, shady graduates and unemployable youth got jobs by bribing their village headmen as, believe it or not, they were the recruitment agency. The panchayats, nagar palikas and nagar nigams were tasked with recruiting people from their areas and naturally, MLAs, corporators and sundry public reps had a field day. Within a short span of time, just before the 1998 assembly elections, the state ended up making 80,000 people shikshakarmis to teach in schools across the state on a stipend of  Rs 5,000-7000 a month depending on the educational qualification. The lowest recruit could be just a matriculate.

The ostensible reason, of course, was shortage of primary and middle school teachers and the whole scheme was couched in enough legalese to ensure that shikshakarmis remained contract workers, so the state did not have to increase its financial burden with permanent staff. Times were tough and Digvijaya was smart. No one knew how this would play out. More than 80,000 people had been given semi-government jobs with no further assurance. The Congress was pleasantly surprised at the hustings. It returned with a better majority. All the shikshakarmis and their families apparently had voted for them as they had a clever plan of their own. Once the shoe was in the door, they knew that sooner or later they would be able to push their way in. They had a better chance pushing it with Digvijaya than a new government which might just drop the entire scheme.

The jostling started almost immediately post-elections. Regular teachers were not affected mostly because shikshakarmis were posted in places where there was shortage. But, like everything else in this country, soon enough, the contract workers formed a union and started an agitation for regularisation. In 2000, the state was split and Chhattisgarh received some 40,000 shikshakarmis on its rolls.

The first agitation hit the road 18 years ago and ended up in revision of payscales. The Ajit Jogi government and subsequently, the three Raman Singh sarkars have all tried to be pacific and diversionary. Over the past 18 years, unions have struck work for 142 days and have faced 13 committees. They have also been smart in picking their battles and timing their strikes mostly before the state elections. The final committee headed by the state’s chief secretary, Ajay Singh, recommended “samviliyan” or regularisation of shikshakarmi cadres with the state education department on June 18.

Chief Minister Raman Singh announced that all those who had completed eight years as shikshakarmis would be taken in on regular roles. The government has created another tier of teachers below the regular education department recruits. The additional financial burden on the state would be to the tune of Rs 15,000 crore annually and each contract worker is likely to get a pay raise between Rs 6,000- Rs 10,000.

Once the lists are in place and payrolls completed, the education department will control more than 3.5 lakh teachers, including the two lakh who are at present on their rolls. “There are 47,000 schools in the state, including 30,000 primary and 13,000 middle schools,” said Education Minister Kedar Kashyap. He hopes that regularisation of contract teachers will result in better teacher-student ratio and school environment.

The legal difficulties will now begin unfolding as fast as the rollout of the scheme. Some shikshakarmis who narrowly missed the cut-off of eight years have now decided to approach the court. “Those who complete eight years as shikshakarmis subsequently will also be absorbed,” said Raman Singh. But the difficulty is that the state will have to maintain a shikshakarmi cadre for the next five years at least till the last of them is absorbed. The notification also does not say if the state has decided to discontinue fresh recruitment of shikshakarmis. It is assumed that the cadre will continue and remain a niggling point for succeeding administrations.

Before the samviliyan, the total shortage in the education department was only of 11,000 teachers, 22,659 headmasters and 2,277 principals. Now that 10 times that number of teachers has been recruited, how will the department deal with this influx? Very few of the shikshakarmis fall in the same league as recruited teachers even though their main plank has always been “same pay for same work”. Every child in the state knows that contract teachers have always underperformed. It will be incumbent upon the government to fast-forward promotions in line with the new recruitments. So the sooner it fills the senior positions, the better it will be for everyone.

For the contract teachers who had become a unionised force and almost lawless with very little degree of direct control, testing times lie ahead. The education department should assert its authority and stop the rampant school bunking.