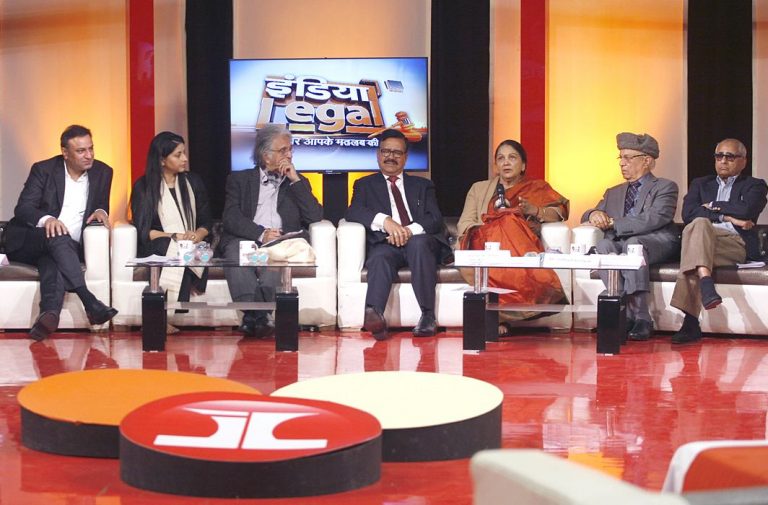 There are many adjectives one can shower on Dr Upendra Baxi to describe his five-decade-long illustrious career. He is a scholar of international repute in the field of law, an acclaimed author of several books and papers, a widely celebrated legal mind, an unabashed votary of India’s secular and liberal ethos and a recipient of the country’s fourth highest civilian honour—the Padma Shri. Yet, if there’s one description that the humble Dr Baxi prefers over all of these ostentatious titles, it is that of a teacher.

On February 4, India Legal felicitated Dr Baxi for his continuing service in the field of education and unparalleled contribution in mentoring novices struggling to understand the complex web of jurisprudence and later went on to become leading lawyers and members of the judiciary in India.

It was not surprising then that those who came together to honour Dr Baxi at the conclave included retired judges of the Supreme Court, high courts and district courts, senior advocates and academicians. What followed was a captivating discussion on the challenges facing the Indian judicial system.

These are some glimpses from the conclave:

In September 1979, Dr Baxi, along with three other professors, wrote an open letter to the then judges of the Supreme Court on their controversial judgment in the Mathura custodial rape case.

Justice Shiva Kirti Singh, chairman, Telecom Disputes Settlement and Appellate Tribunal (TDSAT) and former judge of the Supreme Court, said: “His contributions to law and legal thinking will be written in golden letters. He has been a great professor and vice chancellor (of  Delhi University from 1990 to 1994) and a source of inspiration for several generations.”

Rupinder Suri, senior advocate and former president of the Supreme Court Bar Association, lauded Dr Baxi for that letter and the openness with which he addresses all issues. “He is a motivator and a catalyst. He has touched so many lives and helped them become better. He never imposes his ideas and encourages you to have your own ideas.”

Dr Upendra Baxi: There have been several instances of friction in the Supreme Court and high courts and in that sense, the judiciary has permanently been in crisis. As a citizen, I am happy to see this crisis because there should be a crisis in any organisation for it to be saved, or else there would be no renovation.

I must add that the media and the public failed to pay attention to the two major issues that the four judges raised—the roster system and the collegium. Why isn’t the issue of collegium being raised by the press or the bar? The judges made it clear that the Supreme Court had written to the central government on Memorandum of Procedure but even after several months, the government has not replied. The government can’t take its sweet time to respond to the Supreme Court. When the chief justice of India writes a letter on behalf of other judges, there must be a reply.

Justice SK Singh: The press conference by the Supreme Court judges and the crisis was indeed unfortunate but I am confident that this situation too shall pass. Every system has its flaws and gaps and they are to be understood and preparations should be made in advance to plug them. In a constitutional system, there are occurrences which are extra-constitutional but those situations must be rare. Judges are wise people; chief justices are sensitive to the needs of the institution and they take care to ensure that no crisis reaches a stage where it blows up on the face of the nation.

Dr Baxi: The Supreme Court has very clearly stated in one of its judgments that there is a right to justice and access to justice is a fundamental right of citizens. However, access is multi-dimensional. Religious organisations, media, education and every other section must strive to take people to justice. There has to be a social movement or else access to justice will always remain limited.

Prof. BT Kaul, chairperson, Delhi Judicial Academy: The Delhi Judicial Academy has moved from traditional teaching areas to sensitive programmes. We deal with the sufferings of the common man and try to empower the weakest of the weak… The maximum number of officers that have come to us recently are girls. They are so brilliant that some can easily be taken in as sessions judges.

Dr Baxi: There is no such thing as higher judiciary and lower judiciary. All judges are equal. I recall an occasion when (former) Chief Justice (YV) Chandrachud got very upset with me when I asked him to outline the difference between a nyay sarpanch and the chief justice of India. I told him that in the appointed jurisdiction, the nyay sarpanch is as supreme as the chief justice of India. I feel that the Constitution must be amended since it has a chapter called “subordinate judiciary”… the term should be changed.

WOMEN IN THE LEGAL PROFESSION

Senior Advocate, Supreme Court, Pradeep Rai: I do not think that women now get a raw deal in the legal profession. Aishwarya Bhati and many others like her have proved that women can be successful lawyers. The representation of women as judges has also seen a gradual increase over the years. Some people believe that the environment in Indian courts is not conducive for women lawyers because they face difficulties and harassment from their male counterparts. However, I do not share this view. I agree that in India, women have to work harder than men to succeed in a profession because our tradition is such that it is expected that a working woman pays equal attention to running household chores. But if a woman decides that she will not be bogged down by these traditions, then nothing stops her from succeeding.

Aishwarya Bhati, additional advocate general, UP: Traditionally, the legal profession has been a male bastion and litigation was something women did not choose as a career option as it was not conducive for them. But I see a lot of women lawyers doing very well now and the glass ceiling has been breached. Women lawyers are very motivated. The attitude of the judiciary towards women lawyers is also becoming increasingly positive. Presiding judges give women lawyers a very patient hearing and this is something that is very encouraging, especially as a bulk of senior advocates is men.

Manoj Sinha, director, Indian Law Institute: We have an intake of brilliant women. However, they simply want to go abroad complaining that there is no proper environment in India for practicing law. I see a distinct reluctance among women to pursue a career as a lawyer in Indian courts.

Justice K Sreedhar Rao, former acting chief justice of Gauhati High Court: In the course of time, some things have gone awry and led to criticism of the manner in which judicial activism is supposedly coming in the way of the Executive. However, the situation has to be looked holistically as sometimes, there might be lapses on the part of the Executive and the Legislature and so the Judiciary has to step in as the custodian of law.

Subhash Kashyap, former secretary general of the Lok Sabha: It was said here that if the Executive and Legislature fail to do their job, then the Judiciary is the only alternative. My point is, if the Judiciary doesn’t do its job, can members of Parliament sit in courts and do its job?

Justice SK Singh: I agree with Mr Kashyap. The Constitution doesn’t mention impeachment process for the chief justice or any member of the judiciary. The term impeachment has been very loosely used in the judiciary.

Inderjit Badhwar, Editor, India Legal: This is something I want to know from Professor Baxi. Our Constitution wanted legislators to be as independent from the Executive as possible. But today, we see that the Legislature has become a slavish extension of the Executive. This subject, I feel, has not been dealt with. Do you feel that the Constitution probably needs to be tweaked to ensure true separation of powers?

Dr Baxi: A cabinet form of governance has been converted into a prime ministerial form of government from Pandit Nehru’s time. That is a basic flaw be-cause the prime minister is only one among equals as per the norm envisaged by the framers of the Constitution. The people of India seem to have accepted a de facto amendment of the Constitution. The PM can’t treat the entire cabinet as a footnote. The question really is: Why have we accepted this change and when will we protest?