The bookis a fascinating account about the story of migrations as is revealed by the evolution of their languages. Through it the reader can get a new look at the words we speak and the migrations of ancestors. 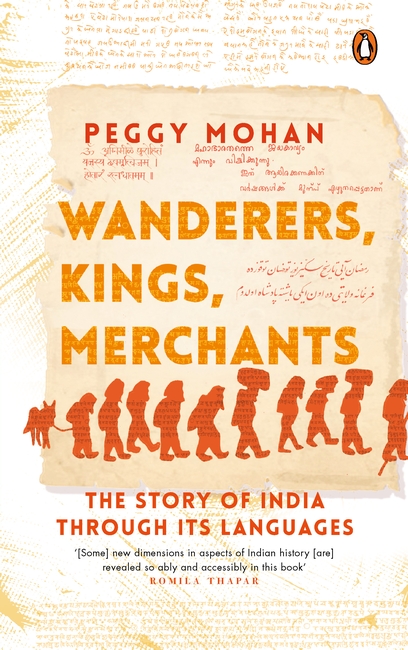 Peggy Mohan’s recent book–Wanderers, Kings, Merchants…The Story of India through its Languages–is a masterly exploration of a very complex subject. Those of us who know more than high school history and the colourful myths of itihas know that the well-watered but mostly sparsely populated lands of ancient India attracted scores of migrant tribes from the barren lands of Central Asia and the inhospitable jungles of Burma and beyond.

Many of us know that Dravidians, Aryas (not Aryans), Jats, Persians, Scythians, Parthians, Kushans and others came from the West. Some of us know that a few Thai and Shan tribes migrated from the East, but very few know that the Tibetan kingdom of SongstenGampo once ruled huge tracts of modern Bihar and Bengal. Very few of us also know much about prehistoric ethnic groups like the first Negrito and Austroasiatic people who may have migrated from Africa through India about 57,000 years ago to reach east Asia and Australia from where some tribes may have migrated back to central India about 4,000 years ago. Few may also know the possible influence of ancient Acadian, Sumerian and other ancient cultures.

Most of what we know has been gleaned from archaeology that has tried to trace the evolution of human artefacts like pottery, coins, foods and weapons and from the more controversial science of DNA mapping. These findings have, however, often clashed with the myths of the land with its legends created by the vivid imagination of their numerous storytellers.

Peggy, who teaches linguistics at Delhi University and did her doctorate in linguistics from Michigan University, now adds a fascinating account about the story of these migrations as is revealed by the evolution of their languages. It is a fascinating account that convincingly shatters many of our earlier beliefs. She skillfully shows that there is much more to languages than just its words and that they all had an underlying cement of well-defined grammatical and linguistic markers.

Her origins in Trinidad as the daughter of a Bhojpuri migrant from east Uttar Pradesh made her familiar with the street language of Creole but she then discovered that this English Creole was a little different from the Dutch Creole of nearby Guyana or the French Creole of Louisiana.

All these languages had evolved from base languages like “Kwa” of the slaves from west Africa who, like the indentured labour from India, had been forced to work on Caribbean sugar plantations. Thus, many English, Dutch and French words had been sprinkled like icing on a cake on to the underlying bedrock of the west African slave languages of each area.These European loan words were thus fused into the underlying slave language to quickly create a new language.

She explains that almost all migrants throughout history came in a number of small groups of males who probably killed off or enslaved the resident men and married the local women. Thus the children of these unions would speak their mother’s language in their childhood and then switch to the elite language of their fathers by a linguistic process called diglossia as they grew older. This also seems to have happened in all other ethnic groups including the Aryas in India as is shown in Kalidas’ Sanskrit play Shakuntalam (Abhijnanasakuntalam) where the men speak in Sanskrit but the women speak in a local Prakrit.

The book further explores the sentence structures of language, syntax, inflection, tones, grammar and other distinctive linguistic markers. She explains that all the south Indian languages, like many languages of east Africa, east Asia and central Asia, are agglutinative with word endings glued or strung together unlike Sanskrit or Indo-Arya languages like Hindi, Punjabi, Sindhi, Balochi, Pashto, Rajasthani, Gujarati, Marathi and Konkani. This divide is further emphasized by the retroflexion sounds, dental sounds, alveolar sounds, tones, inflection, word sequences and other language markers. South Indian languages, especially Malayalam, carry a huge baggage of Sanskrit loan words on top of their basic Dravidian substructure. With the powerful influence of the Brahmins, many Sanskrit loan words have also been peppered onto all other Indian languages.

The book clearly shows that despite numerous loan words, Sanskrit was not the mother of all languages as many believe, but was the child of many ethnic parents. Old Sanskrit, that had been very similar to Old Persian, may have mothered Greek and Latin that later evolved into many European languages and had a completely different grammar and linguistic features as compared to languages of other parts of the world. The huge sweep of the book also includes insights into many tribal languages like Munda, Gondi and Nagamese that we know so little about.

Peggy postulates that the many Arya tribes who migrated to India (perhaps the “Ten Tribes” of legend?) had different versions of their sacred Rig Veda and that these may have been consolidated by the Kuru tribe around 700 BCE. The Brahmins, as the zealous keepers of this language, tried to preserve Sanskrit in pristine purity with elaborate rituals of precise recitation and memorizing, but it also split and proliferated. Sanskrit is thus a little different east of Varanasi where Magadhan influences can be seen. This may also explain why the roughly 80 ancient fragments of the Rig-Veda that are in existence are not exactly the same.

The Brahmins had declared Sanskrit to be a sacred language just as the priests of Judaism regarded Hebrew, the Roman priests of Christianity considered Latin and the clerics of Islam considered Arabic, but the footprints of their origins show that they had all evolved over thousands of years from many often forgotten ethnic and historic origins.

The narrative also shows the evolution of Hindi and Urdu that only took shape in the 12th century CE as is clear from the writings of Amir Khusro and had their roots in a number of native Prakrit-based languages like Hindavi, Braj and Bhojpuri with infusions from Persian, Uzbek, Sanskrit, Arabic and others.

It goes on to show the huge impact of English that was to shape a distinctive fusion to make “Hinglish” such a powerful language that is now a virtual bridge to all other Indian languages. Religious convictions made many scholars try to Sanskritise or Persianise this evolving Hindustani into Hindi or Urdu, but Hindi films continued to use numerous Persian adjectives and other words as they were more emotionally satisfying. Diglossia is also evident in the speech of many anglicised Indians who usually speak a simple “kitchen Hindustani” in their childhoods with their servants and shopkeepers and later switch to the English taught at their schools.

Peggy’s writing is lucid with amusing imagery, but these complex and unfamiliar thoughts about this “Language Archaeology” are more difficult to digest while interesting and thought-provoking concepts like diglossia, agglutinative and ergativity twist the tongue. This insightful book, however, opens a very important window through which the reader can get a new look at the words we speak and the migrations of our ancestors. The well-researched book is convincing, but many orthodox thinkers will find its truths very inconvenient to adjust to their long-held beliefs but unlike the evidence of DNA, the grammatical elements in all languages is clearly evident and irrefutable.