A recent publication of the Lok Sabha Secretariat created a stir over the use of some words and expressions. While the Opposition has said that it is an attempt to gag them, is this much ado about nothing? 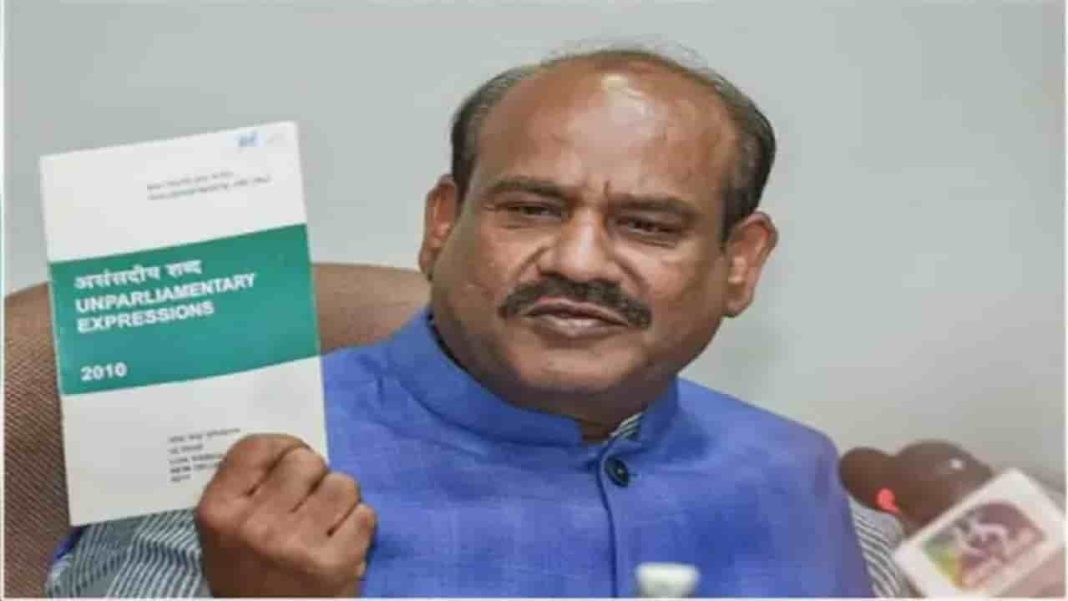 A publication entitled “Unparliamentary Expressions, 2021”, released by the Lok Sabha Secretariat on July 14, 2022, created a political storm with Opposition parties accusing the government of “throttling” democracy by trying to “gag” them. Om Birla, Speaker, Lok Sabha, clarified that no word has been banned from use in Parliament.

What perhaps got the Opposition’s goat was the fact that some of the words and expressions contained in the publication were those which they had been regularly using in their criticism of the working of the government and its functionaries.

One of the leaders of the Opposition stated that they would continue to use the words despite the “ban”. Another leader shot off a letter to the Speaker stating that some of the words expunged are the very essence of debate and discussions. He complained that none of the political parties have been consulted on the sensitive matter and argued that it should have been discussed in the Rules Committee. Yet another leader said that he would use all these words and is willing to be suspended for that. However, a lone voice also said that he would treat the list as indicative rather than definitive. He would speak normally and like to see whether the list is applied in a draconian manner to stifle him.

The ruling party members called the Opposition’s objections to the publication “a manufactured row”. The Opposition parties had not done their routine homework before raking up the issue. The publication is part of the practice which has been in vogue since 1954, they said.

Om Birla convened a press conference against the backdrop of the somewhat unseemly controversy and informed that Parliament had been bringing out compilations of “unparliamentary” expressions since 1954. The addition of certain words and expressions follows the process that was prescribed in 1959, and the catalogue, since its inception, now runs into 1,100 pages. The current publication is an addendum and comprises words and expressions which were found to be not in conformity with the dignity of the House by the presiding officers of the Parliament as well as state legislatures. No word has been forbidden for use.

Two more comprehensive publications brought out in 2004 and 2010 carried similar prefaces and highlighted the fact that the keywords used in the compendium are not necessarily unparliamentary unless read in conjunction with the expression.

From the foregoing discussion, certain key features of the publication(s) need to be appreciated. First and foremost, it is not for the first time that such a publication has been released. It has been around since the early days of legislative bodies in India following the elections in 1952 under the post-Independence Constitution of India.

Similar publications are also in existence in other democracies, especially Commonwealth countries. Secondly, it is a post-facto compilation of decisions taken by the presiding officers to expunge certain words and expressions and is not a prospective direction from the Chair. Again, it does not ban the use of any word or expression; the expunction is always contextual. Thus, expunction of words such as “erroneous” (Ontario L.C.:“…The minister’s reply to my question this morning was not factual. It was erroneous.…”), “mate” (New South Wales, Australia: “…stop covering your mate…”), “species” (House of Commons, Canada: …“however, it is under threat from a strange invasive species, and no, not the conservatives…”) and “worst” (Lok Sabha: “This is the worst, worst, worst corrupt Government…”), et al would otherwise not make any sense. Finally, in a digital ecosystem, what has been said in a legislature is recorded and circulated time and again, much before the decorously expunged text of the debate sees the light of the day.

How do the unparliamentary words and expressions get expunged in actual practice? The primary process is set in motion when during a discussion/debate a member raises an objection to the use of a particular word or expression by another member and requests the Chair to expunge it. The presiding officer, after consideration, gives his ruling. If the word or expression is ordered by the presiding officer to be expunged, it makes its entry into the list of unparliamentary expressions in due course.

The “row”, if at all there was one, did not end there. The din created by the unparliamentary beating of drums had hardly subsided when another snake in the grass raised its head. One of the many pre-session bulletins issued by the Rajya Sabha Secretariat on July 14, 2022, before the Monsoon Session, 2022, stated: “Members cannot use the precincts of the Parliament House for any demonstration, Dharna, Strike, Fast or for the purpose of performing any religious ceremony.” It was an explosive two liner and raised a furore, with the Opposition members calling it yet another attempt to bulldoze dissent. One member stated that such dictatorial orders mock democracy. Protesting in the Parliament House complex is a political right of MPs. Yet another member, very wisely, observed: “Every year they issue these notices in #Parliamentary bulletins. Demonstrations, dharnas, strikes, fasts are part of legitimate parliamentary tactics to register protest. No stopping us.”  Once again the Speaker, Lok Sabha, had to issue a statement saying that these circulars are routinely issued. He also urged members to maintain the dignity of Parliament by not using routine information for creating news.

In the ultimate analysis, it must be noted that Parliament is an autonomous apex institution and the list of unparliamentary expressions has not been imposed on it by any outside regulatory body. It is part of the self-regulatory mechanism, which a democratic institution has prescribed for itself. It is more in the nature of a guideline for the members to consider, much like parliamentary customs and conventions, parliamentary etiquette and code of conduct for members listed in handbooks.  No doubt, these elaborate aphorisms are transgressed, from time to time, by those very persons who have so meticulously put them together.

The lexicon in question is an evolutionary compendium, which attempts to keep us abreast of the innovative usage of everyday words and expressions ingeniously devised by the legislators from time to time. If “jumla-jeevi” is passé, can “jumla-veer” be far behind?

However, all said and done, it would be far better if the democratic authorities, rather than worrying about jumlas, collectively seek to expunge/banish poverty, illiteracy and ill-health from the lives of the people. Taking some liberty with Alexander Pope, without using any unparliamentary words or expressions, I would say:

“Let us not for unparliamentary words contest: whatever is debated best, is best.”