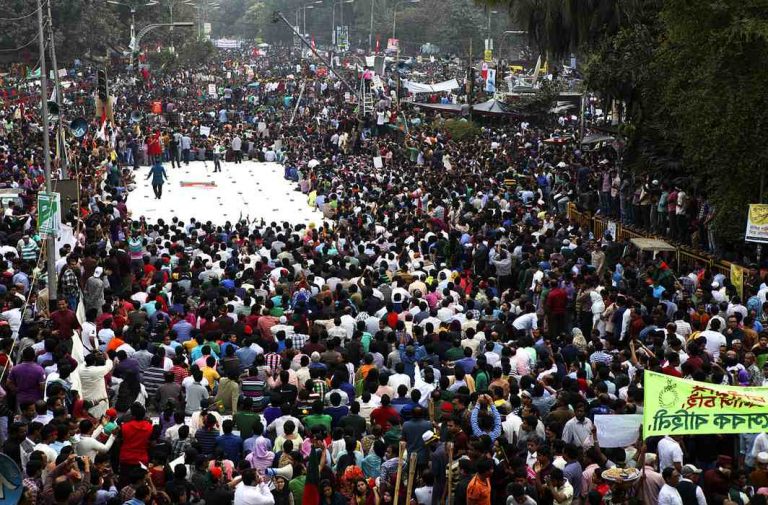 Above: Bangladeshis protesting against War Crimes at Shahabag Square in 2013/Photo: Faisal Akram/Wikimedia

As Bangladesh prepares to celebrate the golden jubilee of its formation in 2021, there are constant reminders that it is not willing to forgive or forget the past:  it continues to punish all those who sided with the Pakistan army in the genocide committed in 1971.

Three international crimes tribunals set up in 2009 to investigate and prosecute all suspects for their roles as Razakars, Al Badr and Al-Shams during the Bangladesh war sentenced to death five persons for committing crimes against  humanity during the liberation war. During the liberation struggle, they had worked as members of the  Razakars  Bahini, an army supported by  the Pakistani armed forces and were responsible for committing abduction, confinement, torture and killing of at least 22 persons, including seven freedom fighters. The international crimes the tribunal headed by Justice Mohamed Shahinur Islam and two other members Justice Amir Hossain and Justice Abu Ahmed found that in 1971 all the five convicts who were  sentenced to death were involved in supporting the Pakistaini rulers and were active members of the jamait-E  Islami.

When the court was announcing the judgement,  one of the convicts Mohammed Ranju Miah, 60 was  present. These convicts were sentenced to death  in what is called as the Gaibandha sub division crime in the erstwhile East Pakistan. These convicts were indicted in May 2018 and were tried on four counts of crimes against humanity.

All the five war criminals were sentenced to death for abducting a Hindu man and two Hindu women from village Bishnupur under Sadar Thana Gaibandha in June 1971,  torturing the man in confinement and murdering him and convert ing women to Islam. They also compelled 330 to 400 Hindus to leave the country and forced to go to India, They were also sentenced to death for detaining seven freedom fighters and torturing and killing them.

The international crime tribunal has ordered that all those who were sentenced should be apprehended and sent to jail and they should be executed. The tribunal ordered that all the sentences would be merged and asked the police to initiate an effective, prompt and appropriate measures for ensuring that the absconding four convicts are caught. So far, six persons who were involved in the war crimes were hanged on the order of the tribunal so far.