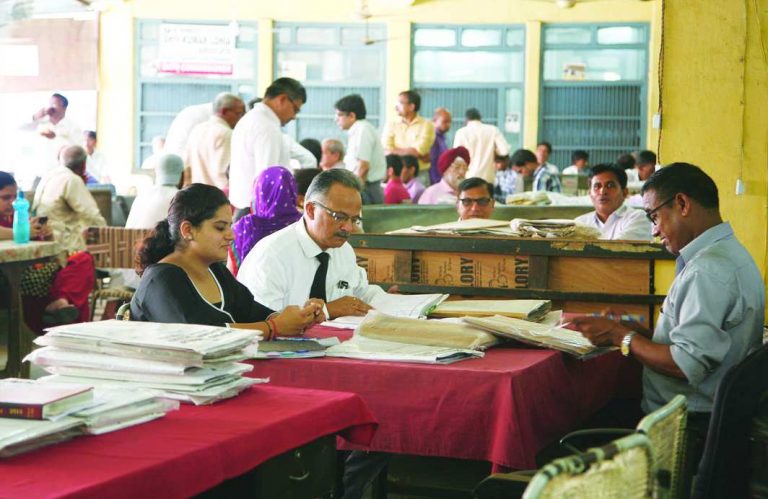 Above: A busy district court in Gurgaon. Photo: Anil Shakya

Despite the shortage of judges in the country, many are being forcefully removed from service on grounds of “dubious conduct”. This has also percolated to other services under the Modi government

“Judicial service is not a service in the same sense of an employment as is commonly understood. Judges are discharging their function while exercising the sovereign judicial power of the state. Their Honesty and integrity is expected to be beyond doubt.”

Despite the Supreme Court estimating that there is a dire shortage of 5,000 judges at the district and subordinate level countrywide, high courts have compulsorily retired senior judges as they take a dim view of the conduct of their subordinate judiciary.

The recent decision of the Jharkhand High Court to compulsorily retire 12 judges from its subordinate judiciary has sent ripples across the state. Most of those retired with a three-month severance pay and notice are district judges and all are past the age of 50. The key word in the statement issued by the state general administration department which took the action on the behalf and advice of the Court is “dubious conduct”. All dismissed judges were evaluated by a High Court committee which found them short on integrity and conduct.

The state government spokesperson and principal secretary, Nidhi Khare, has refused to comment further on the dubious record of the judges, stating that it is a matter best addressed to the High Court, as, no doubt, the affected will go in appeal against their dismissal.

The two things that will be clarified in due course is how many of these worthies will receive their pension and what other punishment has been accorded in terms of restrictions on practice as lawyers. Most lawyers in the know about the conduct of the dismissed judges also refuse to delve further on it, but it is reliably learnt that at least two district bar associations had complained to the High Court about the conduct of the judges.

The judiciary is perhaps the only responsive system in the country where public employment is concerned. While rules of service and pension remain almost identical for all government employees, only the judiciary routinely weeds out its bad apples.

The Department of Personnel and Training (DOPT) has only recently started strictly implementing its compulsory retirement programme after review at 15 and 25 years of service under pressure from the Modi government. At least five principal secretary-level IAS officers and five IPS officers have been given the boot in the past three months by the NDA government. Most of them are from Chhattisgarh and Madhya Pradesh. These include direct recruits Babulal Agarwal, a 1986-batch Chhattisgarh cadre officer, and PK Dewangan, a 91-batch IPS officer of the same cadre.

Though the action taken by the Jharkhand High Court is rare, a similar action had been initiated by the Chhattisgarh High Court in 2011 when it retired 17 judges, including two district judges in one stroke. It recently retired another four judges.

(i) Whenever the services of a public servant are no longer useful to the general administration, the officer can be compulsorily retired for the sake of public interest.

(ii) Ordinarily, the order of compulsory retirement is not to be treated as a punishment coming under Article 311 of the constitution.

(iii) For better administration, it is necessary to chop off deadwood, but the order of compulsory retirement can be passed after having due regard to the entire service record of the officer.

(iv) Any adverse entries made in the confidential record shall be taken note of and be given due weightage in passing such order.

(v) Even uncommunicated entries in the confidential record can also be taken into consideration.

(vi) The order of compulsory retirement shall not be passed as a short cut to avoid departmental enquiry when such course is more desirable.

(vii) If the officer was given a promotion despite adverse entries made in the confidential record, that is a fact in favour of the officer.

(viii) Compulsory retirement shall not be imposed as a punitive measure.

As Chief justice of the Allahabad High Court, DY Chandrachud had ordered the compulsory retirement of 15 judges, including 12 additional district judges in 2016.  The High Court had similarly dismissed from service 11 trainee magistrates who had been found guilty of “behaviour unbecoming of a judicial officer” at a Lucknow hotel. Similarly, Ahmedabad High Court had retired 18 judges in 2012. One of the judicial officers, Yoshodhara Pandya, even went on to appeal her dismissal on several grounds, including constitutional impropriety. The appeal is still pending. Similarly, Delhi High Court had last year retired Chief Judicial Magistrate Raj Kapur of Patiala House; he was seen taking extra interest in granting bail to big property developers, including promoters of Unitech.

A vigilance team appointed by every High Court keeps an eye on the subordinate judiciary and routinely checks on complaints from litigants and lawyers.

So what are the grounds on which a judge can be dismissed and what process is followed by the High Court in arriving at this decision? Judges are usually dismissed on perusal of their record, investigation of their personal integrity and conduct. A vigilance team appointed by every High Court keeps an eye on the subordinate judiciary and routinely checks on complaints from litigants and lawyers. Its report is then put before the entire strength of the High Court which then takes the decision.

In 2010, the Supreme Court, while elaborating on the subject, had laid down in the case of Mohan Lal Vs state of Jharkhand that “even one single adverse entry and however old can mean you are gone”. In that case, Lal had challenged his dismissal on the grounds that he could not be dismissed before the age of 55, amongst other things. Pandya had similarly challenged her dismissal on the grounds that service rules and Gujarat State Service (Pension) rules were ultra vires the constitution as they gave undue advantage of dismissal without sufficient cause to the employer.

Though in one case, the Karnataka High Court has upheld the appeal of 10 dismissed judges, it was on the grounds of dismissal, which according to it, has to be unquestioningly about the conduct and integrity of the judge.

That brings us back to Jharkhand and as such, the dismissed party may have little chance of getting the verdict overturned.