The bench of Justice Ashok Bhushan and Justice M.R. Shah had sought the Centre’s response on its Covid compensation policy and death certificates after a petition asked for at least Rs 4 lakh each for victims. 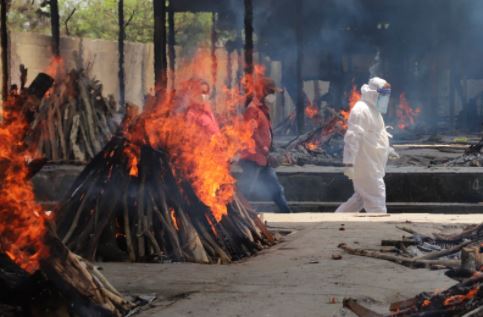 The Central government has told the Supreme Court that it cannot afford to pay ex-gratia compensation of Rs 4 lakh each to the families of people who have died due to Covid-19. The government has also said the disaster management law mandating compensation applies only to natural disasters such as earthquakes, floods etc, it said.

The bench of Justice Ashok Bhushan and Justice M.R. Shah had sought the Centre’s response on its Covid compensation policy and death certificates after a petition asked for at least Rs 4 lakh each for victims.

In its 183-page affidavit filed on Saturday night, the Centre said: “If an ex-gratia of Rs 4 lakh is given for every person who loses life due to Covid-19, the entire amount of SDRF may be spent on this item alone, and total expenditure may go up further.”  The Supreme Court will take up the matter for hearing on June 21, Monday.

“If the entire SDRF funds get consumed on ex-gratia for Covid-19 victims, the states may not have sufficient funds for organizing Covid-19 response, for provision of various essential medical and other supplies, or to take care of other disasters like cyclones, floods, etc. Hence, the prayer of the petitioner for payment of ex-gratia to all deceased persons due to Covid-19 is beyond the fiscal affordability of the State governments,” it said.

Further, it submitted that, “In the case of various disasters, for which such ex-gratia is provided under SDRF norms, the disaster is of a short and finite duration, occurring and ending quickly. Covid-19, on the other hand, is a global pandemic, which has affected all the countries in the world. Within our country, it has affected all the States/Union Territories, which have experienced several waves of Covid-19 cases. There is no precedent of giving ex-gratia for an ongoing disease or for any disaster event of long duration, extending for several months or years.”

The Central government said granting ex-gratia for one disease, while denying the same for those accounting for a larger share of mortality, would not be fair or proper. “It would create unfairness and invidious discrimination between persons suffering from one disease and those suffering from another. Further, unlike floods, earthquake, cyclone, etc., during the present Covid-19 pandemic, thousands of crores of rupees have been spent by Central Government and State Governments on prevention, testing, treatment, quarantine, hospitalization, medicines and vaccination etc. and it is still continuing. It is not known that how much more is required. Thus, Central and State Governments are taking all possible measures to prevent and prepare for future waves of Covid-19.”

Furthermore, it made it clear that under the Disaster Management Act, 2005, Section 12, it is the “National Authority”, which is empowered to recommend guidelines for the minimum standards of relief, including ex-gratia assistance. This is the function entrusted to the Authority by law passed by the Parliament. It is well settled through numerous judgements of the Supreme Court that this is a matter which should be performed by the authority, to whom it has been entrusted and not one where the Court will substitute its own judgement for the decision to be taken by the Executive, the Centre submitted.

The court has also sought response on an issue regarding death certificates/ any letter to the families of deceased, stating the cause of death. Regarding which, the Centre submitted that Covid death will be mentioned in death certificates of every victim. Doctors who fail to certify Covid deaths will be penalised, the affidavit said.

“All deaths with a diagnosis of Covid-19, irrespective of co-morbidities, are to be classified as deaths due to Covid -19. The only exception could be where there is a clear alternative cause of death, that cannot be attributed to Covid -19 (e.g. accidental trauma, poisoning, acute myocardial infarction, etc), where Covid-19 is an incidental finding,” the Centre said.

A single-judge Delhi High Court bench was hearing a plea to set up the State Mental Health Authority (‘SMHA’) and the Mental Health Review Board (‘MHRB’) for Delhi in compliance with the obligations under the Mental Healthcare Act, 2017.
Read more
India Legal
Did you find apk for android? You can find new Free Android Games and apps.