Senior Counsel appearing for the applicant also referred to the statement of the witnesses recorded under sections 161 and 164 CrPC and further argued that applicant is suffering from several diseases. He is in jail since August 14, 2020. 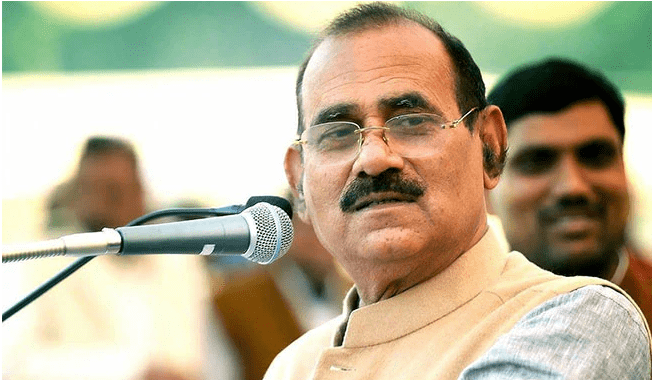 The Allahabad High Court on Friday rejected the bail application of Bhadohi MLA Vijay Mishra, who has been accused in several cases under several sections of the IPC and the Information Technology Act. The order was passed by Justice Om Prakash-VII.

An FIR was lodged on August 4, 2020 by informant Krishan Mohan Tiwari against the applicant, Ramlali Mishra and Vishnu Mishra, mentioning therein that applicant is a relative of the informant. After winning the election of block pramukh, he became active in politics.

It has been alleged that since 2001 the applicant has been residing in the house of the informant and is busy with politics and also looking after his business work. However, this was not with the complete consent of the applicant. Being the relative and presently the elected Member of Legislative Assembly from Gyanpur, he has been forcibly residing in the house of the informant giving threats and torturing them.

The informant was involved in contractual work in different departments after establishing a firm in his name. After some time, applicant took over the firm of the informant and started doing all work himself. He also started depositing the money from transactions in the account of his own firm as well as in the account of his wife and son. He also took possession of all the documents forcibly after getting signatures on the cheques and using net banking for many transactions in the name of the informant. No information was given to the informant at any point of time regarding the earnings from contractual work.

It was submitted by Chaturvedi, Senior Advocate appearing for the applicant, that no prima facie case is made out against the applicant. Applicant is a reputed person in the Society and was elected four times as MLA. He was also Block Pramukh and President of Zila Panchayat of District Sant Ravidas Nagar.

Referring to the contents of the FIR, it was further submitted that offence under section 449 IPC is not attracted in this matter. Informant himself has admitted in the FIR that applicant was residing in the said house with the consent of the informant.

It was further argued that if such was the position, offence of criminal trespass cannot be constituted in this matter. Simply it was a dispute of partnership business which is purely of civil nature. Efficacious remedy will be available to the parties in civil suits / arbitration cases. An appeal against the order passed in the arbitration matter is also pending before the Court. Referring to the copy of the Will deed annexed with the application, it was further argued that there was no occasion to obtain a Will deed in favour of Vishnu Mishra, the son of applicant. The said Will has not been executed. This fact also shows that offences levelled in the matter are not attracted against the applicant.

Senior Counsel appearing for the applicant also referred to the statement of the witnesses recorded under sections 161 and 164 CrPC and further argued that applicant is suffering from several diseases. He is in jail since August 14, 2020.

It was further argued that the disputed property, on which house in question is situated, is exclusively belonging to the applicant’s side. Transactions said to have been made in the matter were done with the consent of the complainant. Thus it was argued that the applicant cannot be kept behind bars only on this ground that a large number of criminal cases had been lodged against him. Applicant is a law abiding person. In the criminal trial going on against him, applicant has been allowed on bail in the year 2013 and by that time bail was allowed considering the entire criminal cases pending against the applicant up to the year 2013.

On the other hand, Additional Advocate General appearing for the State as well as Counsel for the complainant / informant argued that applicant is an influential person. No one dares to lodge an FIR against him. He is involved in several heinous cases also.

At this stage, Counsel for the informant / complainant also argued that no one dares to give evidence against the applicant, therefore, he was acquitted in several cases. Number of criminal cases pending against him were withdrawn due to pressure / influence of the applicant on the then Government. It was next argued that Will deed was being executed in favour of Vishnu Mishra, the son of the applicant, creating pressure upon the informant, somehow informant left the Registry Office and due to that reason, Will deed could not be executed. Referring to the counter affidavit, it was further argued that criminal case for the offence under section 376 IPC is also pending against the applicant. If the applicant is enlarged on bail, he will put pressure upon the witnesses. Thus prayer was made for rejection of bail.

“Thus, having considered the submissions raised across bar and going through the entire record and also looking to the nature of allegations levelled against the applicant, the apprehension shown by the informant in the F.I.R. cannot be denied particularly in view of criminal antecedents of the applicant.

The Court is of the opinion that prayer made for bail in the application is not liable to be allowed and is hereby rejected”, the Court ordered.