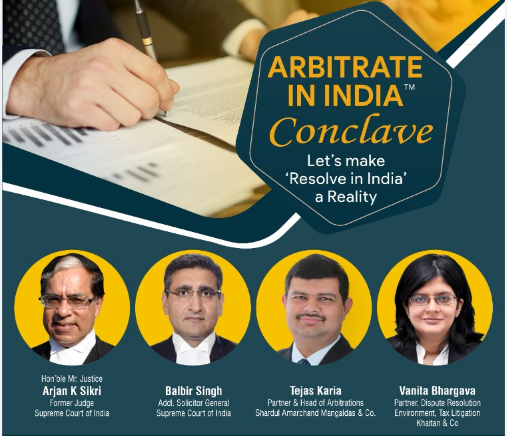 Former Supreme Court judge Arjan K. Sikri was among the panellists at the event. Additional Solicitor General Balbir Singh, Shardul Amarchand Mangaldas partner and arbitrations head Tejas Karia and Khaitan and Co partner Vanita Bhargava were the other panellists of the conclave with former BBC India head Sanjeev Srivastava moderating the conclave. India Legal is a media partner of the event.

The Conclave has been organised to bring forth India’s strengths and challenges in becoming an International Arbitration Hub. The Conclave was based on the theme ‘Arbitrate in India – Conclave: Let’s make ‘Resolve in India’ a Reality.

In a short span of time, IDRC has accomplished more than 500+ arbitration proceedings and assisted in numerous International and National Arbitrations presided by retired judges of the Supreme Court and High Courts despite pandemic conditions.

Apart from former judges of Supreme Court and High Courts and senior advocates, the IDRC panel arbitrators, leading law firms, the PSUs and members of the Bar association also attended the conclave.

Arbitration has had its firm roots in Indian culture for ages in the form of village panchayats. The first codification of its modern avatar was the Indian Arbitration Act, 1899. The Act came at the time of India’s economic liberalisation and its latest amendments promise to aid in fulfilling Nation’s aspiration to become a USD 5 Trillion Economy.

Did you find apk for android? You can find new Free Android Games and apps.
Share
Facebook
Twitter
Pinterest
WhatsApp
Previous articleRajasthan HC disposes of PIL against road built on farm land
Next articleFormer Justice VR Krishna Iyer is remembered for his legal aid and reforms on the prisoners rights: Justice Surya Kant