Bhupendra Patel, a first-time MLA, was sworn in as Gujarat's new Chief Minister two days after Vijay Rupani and his entire cabinet quit, setting the stage for a reboot a year before polls in Prime Minister Narendra Modi's home state. 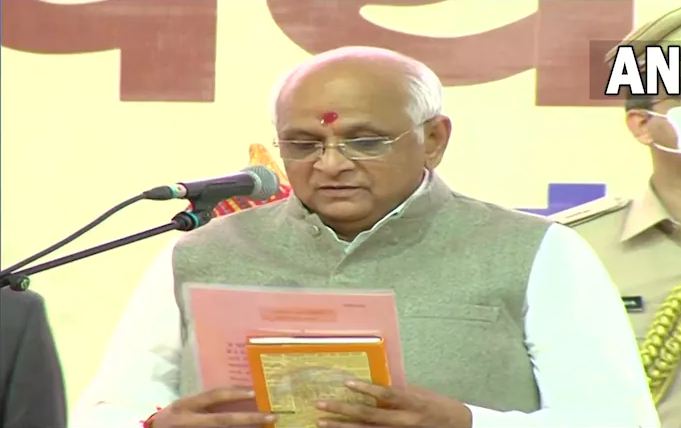 Bhupendra Patel, a first-time MLA, took oath as the 17th chief minister of Gujarat on Monday a day after his name was announced for the top job by the BJP leadership.

The development comes two days after Vijay Rupani and his entire cabinet exit from his posts a year before assembly polls in Prime Minister Narendra Modi’s home state.

Bhupendra Patel was an unexpected choice after names like Union Ministers Parshottam Rupala, Mansukh Mandaviya, and Deputy Chief Minister Nitin Patel were rounding to take the responsibilities for the top job in Gujarat.

Prime Minister Narendra Modi has congratulated the new Chief Minister of Gujarat Bhupendra Patel and tweeted that he knows him over the years and have seen his exemplary work, be it in the BJP organization or in civil administration and community service. He will certainly enrich Gujarat’s growth trajectory, PM Modi wrote.

PM Modi also praised the former Chief Minister Vijay Rupani saying during his five years as CM, Rupani has undertaken many people-friendly measures. He worked tirelessly for all sections of society.

Patel, who has a diploma in civil engineering, has been a member of the Ahmedabad Municipal Corporation and the Ahmedabad Urban Development Authority.

Vijay Rupani became the fourth BJP chief minister to be axed this year after former Karnataka Chief Minister BS Yediyurappa, Tirath Singh Rawat (Uttarakhand) and Trivendra Rawat (Uttarakhand). His handling of the Covid second wave of Covid is believed to be among the factors that drove him out.

Another reason for his replacement by Patel is poll math as Patel’s appointment is meant to mollify the powerful Patidar community, which has been upset with the BJP and has backed the opposition Congress’s Hardik Patel.