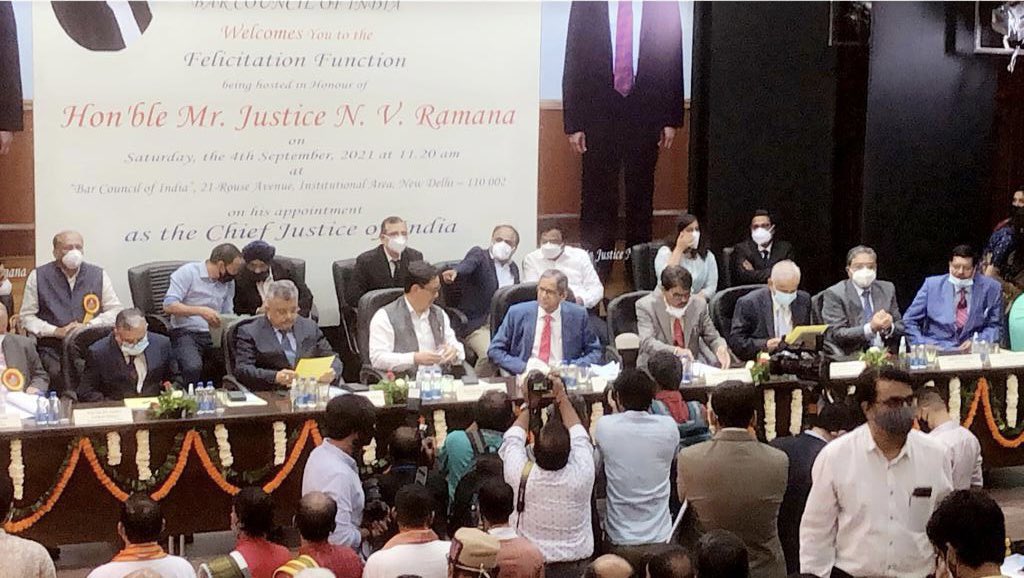 Chief Justice of India N.V. Ramana on Saturday gave full credit of filling up the vacancies in the Supreme Court, as well as various High Courts of the country, to the Supreme Court Collegium, calling it a team effort.

Attending an event organised by the Bar Council of India to felicitate him, the CJI said, “A while ago, I was referred to as Sachin Tendulkar. I must correct the perception here. Like any game, it is a team effort. Unless all the members of the team perform well, it is difficult to win. Here, I must place on record my sincere thanks to my colleagues in the Collegium – Brothers U.U. Lalit, A.M. Khanwilkar, D.Y. Chandrachud and L. Nageswara Rao – who have become active and constructive partners in this endeavour. Due to the collective efforts, as you are all aware, we could reduce the number of vacancies in the apex court to just one. Similarly, after I took over, the Collegium has recommended, if I am not wrong, 82 names to various High Courts. I hope the Government will ensure that the names are cleared at the earliest, just the way the 9 names were cleared for the apex court. It is an ongoing process. We hope to live up to the herculean challenge of filling nearly 41 percent vacancies existing in all the High Courts.”

Union Law Minister Kiren Rijiju said, “This is not the time to raise issues, but I want to congratulate the Supreme Court because it has delivered justice even in the time of pandemic.

Talking about the Centre’s support to the Judiciary, the Law Minister said, “We have the perfect wisdom to know as to what is to be done. We are aware of our responsibility. The government of India is committed to provide all the help and support to the Judiciary. The Government has sanctioned amounts for the betterment of infrastructure of district courts.”

Mr Rijiju further talked about the pendency of cases in various courts. He said, “The biggest problem is the pendency of cases. I think that if the cases are pending for more than three years, its justice denied because after three years, the person may not need justice. It is in lower courts where we need to look urgently… a poor person sells his lifetime of savings for (getting) justice. The focus should be on the last mile person, and common man must be given priority.”

Justice Ramana candidly stated that he had enjoyed his “life as a member of the Bar more than as a Judge. Only a lawyer can have the freedom to speak his mind. I lawyer feels proud of representing a cause without any restrictions. A judge has onerous responsibility. Today, I feel that more than being felicitated, I’m being reminded of my responsibilities as the Chief Justice of India.”

“Undoubtedly, lawyers being the crusaders for rights, are an important wheel in the chariot of justice. A lawyer needs to be an all-rounder and a versatile personality. He must be well-versed about social issues and various fields like economics, history, politics, literature and others.”

The CJI recalled Nani Palkhiwala and said that though he was not an economist, he used to speak on the Budget every year. Justice Ramana also laid emphasis on legal aid and education. He called upon the lawyers to help the needy and give free legal aid and educate people about their rights. To the young lawyers, Justice Ramana advised not to forget the age-old values of the profession.
He mentioned that it was unfortunate that many had been lost to the pandemic and that the lawyers who cannot adapt to modern technology were left back. He said that disparity was not good.

Calling the Bar Council of India as an “institution of great social significance,” Justice Ramana highlighted that BCI was making good efforts through legal aid spreading legal awareness and legal education. “The Bar Council plays an indispensable role in formulating the legal landscape of the country.”

He also observed that law was seen as a rich person’s profession. He remarked that the legal profession is still urban and that without patronisation, no one could guarantee stability. “But I feel, majority of aspirants from rural and vulnerable communities are not getting enrolled into the profession. Law still somehow remains an urban profession.”

Speaking on the struggle of women, Justice Ramana remarked, “Very few women find representation at the top. Even when they do, they still continue to face significant challenges. After 75 years of independence, one would expect at least 50 percent representation for women at all levels, but I must admit, with great difficulty we have now achieved a mere 11 percent representation of women on the bench of the Supreme Court.”

On the rise of corporate firms, Justice Ramana said, “Many young and bright lawyers join law firms.” While this was laudable, he also said “common people cannot afford quality legal advice at corporate prices, which is an area of concern.” This was also leading to a decline in the traditional practice, the CJI observed.

With regards to the judicial system, he mentioned the deficient infrastructure, shortage of staff and vacancies. Justice Ramana has been a strong votary of a National Judicial Infrastructure Corporation. He said, “A comprehensive proposal for creation of National Judicial Infrastructure
Corporation is under preparation. We have collected the status report from across the country. A proposal in this regard will reach the Law Minister very soon. I expect full cooperation from the Government.”

Justice Ramana also emphasised the need for infrastructure to be women-friendly. He said that long waiting hours in the court premises, which did not have adequate toilets, was also a factor that dissuaded women from joining the profession. He said the infrastructure of court buildings was of colonial origin and that the new additions were not sufficient.

On the issue of physical hearings, he said there are problems with connectivity and that he himself has complained of it. However, there was no other option. He requested the Law Minister to get the internet facilities in rural areas also. Justice Ramana commended the Law Minster for being proactive. He said the Law Minster had enough wisdom and knowledge. He thanked Mr Rijiju and Prime Minster Narendra Modi on the recent appointments being cleared in six days. The CJI said he expected the same with recent High Court appointments.

After referring to the efforts of the Bar Associations in ameliorating the conditions of lawyers during these difficult times, and urging the members of the bar to honor the commitment to the cause of justice and never deny those in need, Justice Ramana quoted John W. Davis, the former Solicitor General of the United States, “True, we (lawyers) build no bridges. We raise no towers. We construct no engines. We paint no pictures—unless as amateurs for our own amusement. There is little that we do that the eye of man can see. But we smooth out difficulties; we relieve stress; we correct mistakes; we take up other men’s burdens and by our efforts we make possible the peaceful lives of men in a peaceful state.”

Justice Ramana also said that he would write to the Chief Justices of the High Courts regarding formulating a grievance redressal mechanism. He said interaction was very important and that “we should not live in ivory towers.”

One of the most notable moments of the function was the revelation by Justice Vineet Saran that a PIL was to be registered on the basis of a letter addressed to the CJI regarding reopening of courts for physical hearing. After referring to the letter that another young girl had written appreciating the efforts of the CJI, Justice Saran mentioned that another letter was received by the CJI the day before asking why the courts could not be opened, when the schools have also opened. Justice Saran mentioned that the PIL will be heard shortly.

Speaking on the occasion, Senior Advocate and Chairman of the Bar Council of India Manan Mishra said the judiciary cannot be controlled by the legislature or the executive, otherwise it will not be able to function properly.

This is a welcome step on part of the Supreme Court, especially in the backdrop of the plethora of problems the lawyers, especially in the rural areas face, concerning lack of connectivity and infrastructure. The predominant mode of functioning of the Courts have been the virtual mode. Some headway was sought to be made by various High Courts to resume physical hearings in a limited manner, and the Supreme Court also started the hybrid mode from September 1, he added. However, this mechanism did not have many takers. Even the Supreme Court Bar Association had written to the Chief Justice regarding the arduous SOP issued by the Supreme Court in this regard.