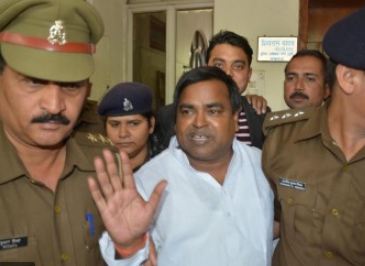 Former Uttar Pradesh minister Gayatri Prajapati and his two other accomplices were sentenced on Friday to life imprisonment in the Chitrakoot minor gangrape case. The Samajwadi Party leader and the others convicted, Ashok Tiwari and Ashish Shukla, have also been fined Rs 2 lakh.

On November 10, the Lucknow MPMLA court had convicted Prajapati, Ashok Tiwari and Ashish Shukla for gangrape under provisions of the POCSO Act. Co-accused Vikas Verma, Rupeshwar, Amarendra Singh Pintu and Chanderpal were acquitted due to lack of evidence.

In 2017, a woman from Chitrakoot district had accused the then UP minister Prajapati and several of his associates of gangrape and trying to do similar acts with her daughter. When the woman protested against this, Prajapati and his associates threatened to kill her and her family.  After this, the victim filed a petition in the Supreme Court to register the case.
On February 18, 2017, on the Supreme Court’s directions, a case was registered against Gayatri Prajapati and six other accused at the Gautampalli police station in Lucknow. After this, all the accused were arrested and sent to jail. A case was registered against all of them under sections of gangrape, threat to life and POCSO Act.

Apart from Prajapati, Vikas Verma, Amarendra Singh, Chanderpal, Rupeshwar, Ashish Shukla and Ashok Tiwari were made accused in this case.  A total of 17 prosecution witnesses have been presented in this case. Prajapati has been in jail since March 15, 2017 in the case.