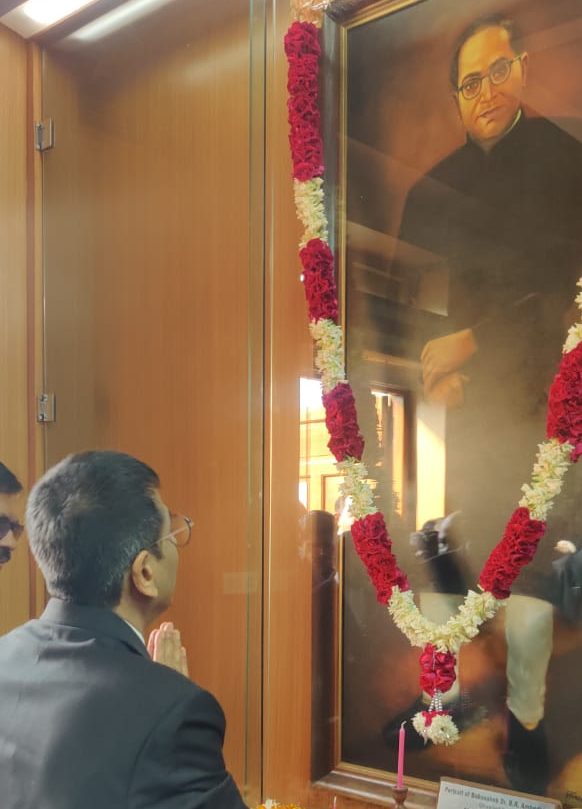 Chief Justice of India DY Chandhrachud paid his respects to the architect of the Indian Constitution Dr Bhim Rao Ambedkar on his death anniversary.

CJI Chandrachud, along with Justice BR Gavai, paid a floral tribute to Dr Ambedkar in the Supreme Court’s library before proceedings to the Court for the sessions.

CJI said that he was glad to be there paying tribute to Dr Ambedkar, who is the architect of our Constitution amd is admired by many people.

CJI added that whatever we are today is because of the vision of great man like Dr. BR Ambedkar.

December 6 is observed as “Mahaparinirvan Diwas” or death anniversary of Dr Ambedkar, who passed away in 1956.

Last year, during the 101st birth anniversary celebration of his father and former Chief Justice of India YV Chandrachud, the current CJI had said,

Talking about Dr Ambedkar, he came from the Mahar caste – which was then an untouchable Dalit caste – as a result of which he struggled to gain access to even primary education.

Justice Chandrachud in his speech had said in that Dr. Ambedkar had suffered humiliation and segregation in his school life where he had to attend classes while sitting outside the classroom and ensuring that he did not touch the water or notebook that belonged to the upper caste students.

Dr Ambedkar did not let this all demoralise him, rather he went to hold 26 degrees and titles, becoming one of the most highly educated Indians of his generation.