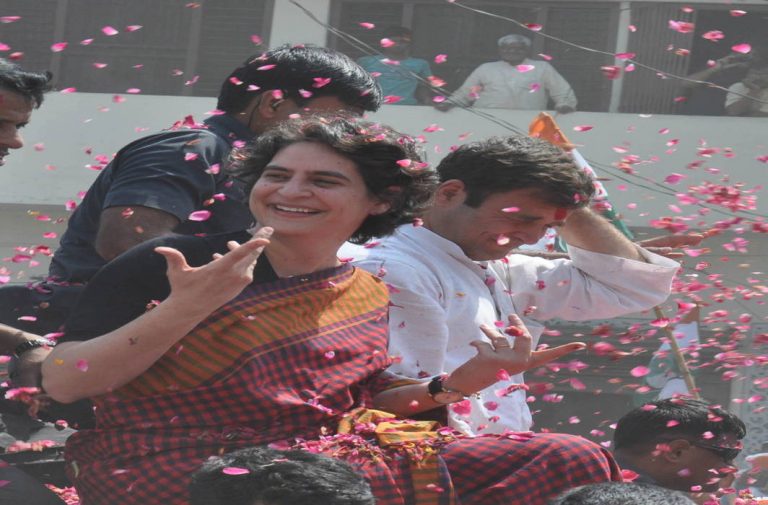 For long, the Congress party has seen Priyanka Gandhi as the “brahmastra” it can use when faced with an insurmountable challenge. With less than a year to go for the Lok Sabha polls, no definitive signals of a Congress revival under Rahul Gandhi and other Opposition parties pining to relegate the Grand Old Party to the role of a character actor in a multi-star-cast election thriller, it’s the right time for the “brahmastra” to be put to use.

Sources say that Priyanka has been roped in by her brother to revive the Congress War Room—the party’s poll strategy office at 15, Gurdwara Rakab Ganj Road—and monitor drafting of the vision document and manifesto for the forthcoming Lok Sabha polls. Priyanka will also be interacting with various heads of AICC departments and frontal organisations to give them specific tasks that ensure a more active party organisation at the grassroots.

A team of party leaders—mix of old hands and those who have gained Rahul’s confidence recently—will be assisting her. Key among them are Sam Pitroda, Jairam Ramesh, Rajeev Gowda and former SBI director Deepak Amin.

Priyanka will continue to advise Rahul on issues that he should take up in his poll campaigns. Sources say that the aggressive stance that Rahul has been taking against Modi on a host of issues lately, both inside Parliament and at party events, while stressing that he may disagree with his political rivals but has “love” for them in his heart, is the result of Priyanka’s advice.

For cynical Delhi-centric journalists and political observers, the debut of Tejashwi Yadav on the capital stage was an eye-opener. He was representing the RJD at the Jantar Mantar event where Opposition parties held a rally against atrocities on women. Rahul Gandhi was meant to be the star but it was the young Yadav who stole the show.

He came across as a trendy young man with a fluency of speech and a potential Gen-next leader. His speech was effective and focused, without the kind of earthy flourishes and rustic homilies that were characteristic of his father, Lalu Yadav.

His targets were both “chacha” Nitish Kumar for sheltering the perpetrators of the sex racket at an NGO in Bihar, as well as the BJP. Tejashwi gave respect to his seniors on the dais while appearing sincere and focused. He is a potential magnet for the youth, is active on social media and showed that he is clear about his objectives—the chief ministership of Bihar, which explains his rejection of Nitish in terms of an opposition alliance in the state. Clearly, a face for the future.

Last week, a host of prominent people in the capital received invitations for the premiere of Mulk, the movie based on a Muslim family that is making waves for the contemporary nature of the storyline. The Rishi Kapoor starrer basically attempts to dispel stereotypes about the community and shows how Muslim-bashing affects lives and causes social upheavals. The premiere, according to the invitation, was scheduled to be screened at the Mahadev Auditorium, a popular venue for private screenings and premiere shows, in the capital.

However, two hours before the stated time, the invitees received an urgent message on their phones that it had been cancelled and shifted to another venue.

Mahadev Auditorium is owned by the Films Division, under the Ministry of Information & Broadcasting. Officials made some lame excuse about the projector not working but it was clear that the powers-that-be had suddenly realised it would be seen as endorsing the film’s theme.

Finally, the filmmakers had to shift the premiere to a private movie hall in the capital.

Since the party came into being nearly four decades ago, the BJP has thus far won only one assembly seat and none to the Lok Sabha from Kerala. Yet the party is targeting 12 seats from the state in the 2019 general election.

While most would consider the target unrealistic, party leaders insist they have a strategy in place, details of which they are reluctant to reveal. Their actions give a glimpse of the strategy, which seems to be to bypass the federal structure, ignore the state government and for the centre to deal directly with the people.

Kerala Chief Minister Pinarayi Vijayan was livid last week after the Modi government chose to directly hold talks with protesters opposed to a highway project that would take away 12 acres of paddy fields which a few families have been cultivating for generations, bypassing the state government. What the Left government felt even more galling was the fact that a union minister, KJ Alphons, who hails from Kerala, was involved in the talks while none of the local ministers or officials were invited. Vijayan lashed out at the centre as soon as he came to know that Nitin Gadkari, Union Minister for Road Transport and Highways, had met a delegation of protesters along with senior state BJP leaders and Alphons. What’s more curious is the fact that Vijayan had met Gadkari last week in Delhi and the latter gave no hint of what he was up to.

Digging up the Pitch

The Delhi and District Cricket Association (DDCA) is more about politics than cricket. Barely had the dust settled on last month’s election, which saw India TV owner and celebrity anchor Rajat Sharma elected as president, objections have been raised about the conduct of elections and matters relating to a conflict of interest. Post his election, a number of office-bearers were sidelined and they have now initiated the process to challenge Sharma’s election. The matter has gone to the newly appointed ombudsman, Justice BD Ahmed.

A total of 11 separate complaints by various DDCA members and members of the executive committee, have been made to Ahmed and some directly to Sharma’s mentor and former DDCA President Arun Jaitley. The complaint alleges that Sharma used his TV shows and radio to promote his candidature but clearly it is more to do with factionalism and internal politics.

Fittingly enough, the venue for the meeting held by those opposing him, all DDCA members, was at the five-star Maurya hotel, which is decidedly odd since the DDCA has access to large meeting rooms and catering services at its Ferozeshah Kotla headquarters. Whether Sharma can hit this one over the boundary remains to be seen.

The Union minister most prone to putting his foot in his mouth is Kiren Rijiju. His aggressive defence of the NDA government often causes embarrassment. The Minister of State for Home was at it again in Parliament last week when TMC MP Sugata Bose was attacking the government on the NRC decision in Assam. Rijiju sprang up and called him “anti-national”. Bose is no run-of-the-mill politician. He happens to be the grandnephew of Subhas Chandra Bose and a former professor at Harvard University. Sugata did not respond to the taunt, merely shaking his head and sitting down, but Rajnath Singh, Home Minister, was seen whispering in Rijiju’s ear. Immediately after the session ended, Rijiju walked across and apologised to Bose, clarifying that he was not questioning his patriotism but merely following the party line.

After his off-the-record interaction with 100 Delhi-based women journalists, Rahul Gandhi had a similar informal exchange with 100 male journalists last week at the India International Centre. Some women journos had outed the meeting on social media but not a word from their male counterparts.