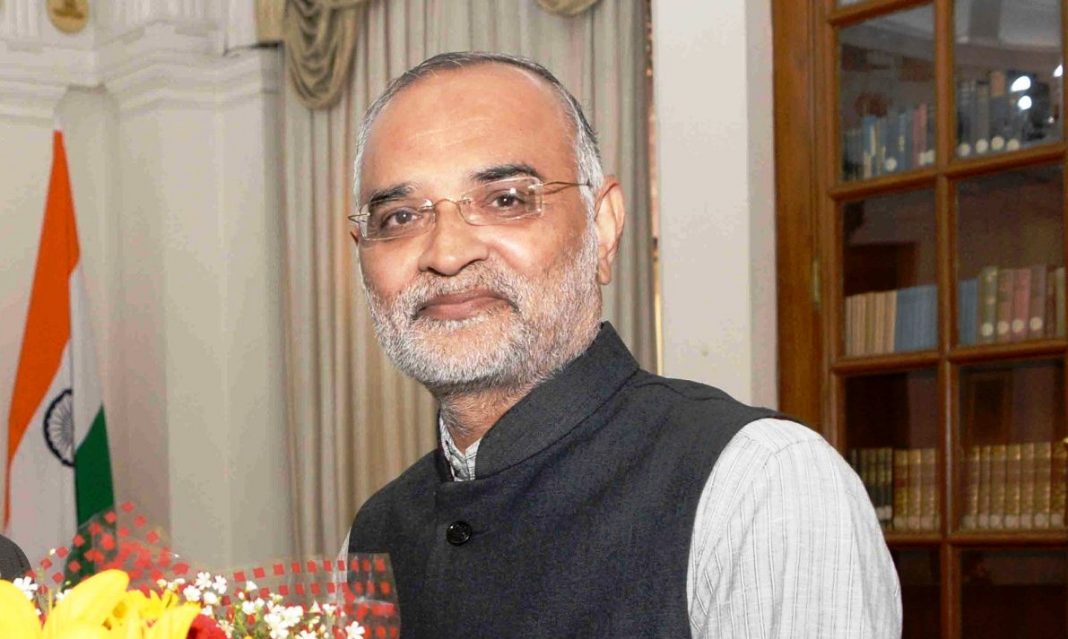 The Delhi High Court held a full court farewell reference on Friday for Chief Justice D.N. Patel, who is retiring on March 13.

Justice Vipin Sanghi, the senior-most judge of the High Court, who was appointed as the acting Chief Justice by the Law and Justice Ministry today, led the farewell. Justice Patel will take over as the chairperson of the Telecom Disputes Settlement and Appellate Tribunal after his retirement.

Justice Sanghi: “Justice Patel has been with the Delhi High Court for more than two years and six months, having been appointed the Chief Justice of the Delhi High Court on 7 June, 2019. Chief Justice Patel was born on 13 March, 1960. He completed his schooling in 1975 with Science subject. After graduating in Science from MG Science College, Ahmedabad, he went on to complete M.Sc. with Organic Chemistry from University School of Science in the year 1981. But since he distinctly associated himself with legal profession, he joined L.A. Shah Law College at Ahmedabad and obtained his LL.B. degree in 1984 with first class. He also did his LL.M with first class and ranked first in the college. The academic record of Chief Justice Patel shows that he was born to excel. He was adjudged a national scholar in 1983-84 and 84-85.”

“Chief Justice Patel enrolled as an Advocate on 28 July, 1984 with the Bar Council of Gujarat. He made his mark as an Advocate in a very short period. His practice included a diverse range of cases in fields of Constitutional Law, Civil Law, Criminal Law and Excise & Customs Law. He was appointed as a Special Counsel of the State of Gujarat before other High Courts. Chief Justice Patel’s deep inclination towards academics prompted him to embrace extra responsibility as a Part-Time Lecturer in L.A. Shah Law College for almost 9 years. He was amongst the most admired teachers.”

“Chief Justice Patel was elevated as an Additional Judge to Gujarat High Court on 7 March, 2004 and became a Permanent Judge of the Court on 25 January, 2006. On transfer, he took oath as Judge of the High Court of Jharkhand,  Ranchi, on 3 February, 2009. He had a great tenure at Jharkhand High Court where he also functioned as the Acting Chief Justice on several occasions. Apart from the contributions he has made while enunciating principles of law in a wide spectrum of cases, his continuous involvement with intellectual activities in the administration of the Courts has made him a multi-faceted personality. The members of this great Bar would agree that the Chief Justice always gave a patient hearing to one and all with consummate ease and always maintained a very balanced temper in and out of Court. At the same time, he was firm wherever so required.”

“Chief Justice Patel participated in several national and international conferences held in India and abroad and presented papers on various topics of law. Throughout his distinguished career as a judge, Chief Justice Patel delivered numerous landmark judgments  on various jurisdictions which have immensely contributed towards the growth of procedural and substantive laws. It will be impossible to make reference to each one of those important judgments.” Justice Sanghi  then read out a few notable observations by Justice Patel.

“During his tenure, he created several posts of officers and other officials in this court and more than 800 vacancies were filled. His techno-savvy approach played a vital role in adoption of technology by this Court and courts subordinate to this Court during the pandemic. The steps taken under his leadership ensured that doors of justice always remained open, even during the strict lockdown during the pandemic as they were converted into e-courts. Because of his dynamic approach only, the video conference hearings and hybrid hearings held by the Delhi High Court were applauded not only by other High Courts but also by the Supreme Court. His endeavour has always been to ensure minimal use of paper to save and protect the environment. Therefore, he made provisions for use of e-books, e-journals and electronic gadgets in the judge’s library and its functions. Under his leadership,  DSLSA conducted the first ever e-Lok Adalat in 2020 amid the restrictive judicial functioning owing to the Covid-19 outbreak. This unique Lok Adalat was the first of its kind in India to be conducted fully digitally on an online dispute resolution platform. “

“Chief Justice Patel inaugurated the new website of DIAC (Delhi International Arbitration Centre) with audio-visual tour of DIAC and publication of first journal of DIAC. He also launched the website of Delhi High Court Mediation and Conciliation Centre ‘Samadhan’. Under his leadership, digital NI Courts were established at District Courts. These were created with the object of providing hassle-free environment to the litigants for filing, hearing and disposal of cheque dishonour cases. These courts are also first of their kind in the country. Currently, 34 digital NI Courts are functioning w.e.f 17 November, 2020.”

Justice Sanghi said, “Chief Justice Patel has always been popular among the Bar. It was in his tenure that 55 Advocates were designated as the Senior Advocates of this Court. While we bid farewell to you Chief Justice Patel and although we shall miss you in this Court, I, on my behalf and on behalf of the entire Court, extend congratulations and best wishes to you for a very successful tenure as a Chairperson of the Telecom Disputes Settlement and Appellate Tribunal and for higher glory. I extend my best wishes and congratulate your esteemed family members.”

ASG Chetan Sharma said: “We have gathered here today to bid farewell to Justice Patel whom we have had the pleasure and the privilege to of having as the Chief Justice for the last 33 months. Your Lordships have endeared Your Lordships to the Bar and the Bench alike with your demeanour,  and compassionate idea of evaluating every situation as it came. Just before the start of this ceremony, we could hear the crackle of little Vidmahe. In our parlance, such crackles of the little girl child is ‘Mangal-Suchak’. This is ‘Mangal-Suchak’ because such crackles are not heard in courts. When an Excise matter or a Custom matter came, we could see Your Lordships incisiveness cut through the chase and come to the point.

Having been appointed the Additional Standing Counsel by the Union of India in the year 1999 and then as the Senior Standing Counsel for the Central Govt from the year 2001, Your Lordship discharged your functions with utmost professionalism and dispatch. Elevated Your Lordship were to the Gujarat High Court on the 7th March, 2004, and took oath as the Permanent Judge of the High Court on 25th January, 2006. Your Lordships took a transfer to the High Court of Jharkhand, Ranchi, on 3rd February, 2009, and I personally had the fortune of appearing in a very tough case in which Your Lordship had let it be known of Your Lordship no nonsense approach in an environmental matter and I was summoned to take a brunt of that. Your Lordship were appointed as a Chairman of the Search Committee in the month of June and July, 2013, for the appointment of Vice Chancellors of Kolhan University, Neelambar Pitamber University. You have also been nominated as Member of General Body of National Judicial Academy, Bhopal, and a Member of the central authority, NALSA, and the list goes on and on.

Coming to another facet that in court Your Lordships demeanour was always pleasant and accommodating, more so to the younger members of the Bar.

Your Lordships wit, humour and one liners have kept the Court  light and moving. I am told by one of my CGSCs that during the tenure of Your Lordship a new phrase on the display board was shown and continued to be so shown which was “Board is Exhausted”.”

Delhi Government Standing Counsel Advocate Sanjay Lao said, “I am afforded with this delectable opportunity to say a few words facilitating and bidding an affectionate farewell to Chief Justice D.N. Patel, who has been with us for more than two and a half years. We are very well aware with Your Lordships remarkable and unparalleled trajectory spanning over all these years. Besides being an excellent jurist, Your Lordships is a great humanitarian who has actively served the society in the various roles played. Sir, you being the Chief Justice of the High Court of Delhi always upheld the rule of law and strongly curb litigations filed with public motive, fraud and social vices which could infiltrate the stream of justice. Justice Patel always kept rich and poor, low and high governmental and non-governmental litigations on equal footage and discouraged frivolous litigations filed as a matter of routine filing having no fruitful output except to extract the focus of cheap publicity. Lawyers, litigants and media, who throng the corridor of courtrooms are the best judge of justice delivery system in which Justice Patel contributed a lot in its development. He is brilliant, considerate, compassionate and possesses all the qualities of a perfect judge. Justice Patel avoided useless controversies rising in stormy matters and fearlessly strengthened the fibres of justice in bestest way. On the personal side, Your Lordships cool temperament is appreciated by every lawyer who has appeared before Your Lordship. Justice D.N Patel will be remembered as a gentleman. I extend our good wishes to you and a very successful and a joyful life.

Bar Council of Delhi Chairman Advocate Rakesh Sherawat said, “Goodbyes are hard, but goodbyes don’t last forever. The wonderful experiences that we share with Justice Patel will be inscribed in our hearts. Justice Patel is not only one of the finest judges, but also a wonderful person. Justice Patel had taken suo moto cognisance of gun-firing incident in the Delhi Rohini Court and immediately taken prompt action which shows his deep concern regarding security and rights of Advocates fraternity. The list of fine judgments authored by Justice Patel speaks about the dedication with which he carried on his constitutional duty while taking care of social reality.”

“Looking at his legal acumen and unblemished record, the Central Government has appointed him as TDSAT Chairperson and I am confident that My Lords will set new standards during his new venture. I, on behalf of members of Bar Council Of Delhi, convey our best wishes to My Lords for his future endeavours.”