The court then asked Mehra that definite information has to be stated in this regard to which Mehra responded that he will try to bring this on record in an in-camera proceeding. 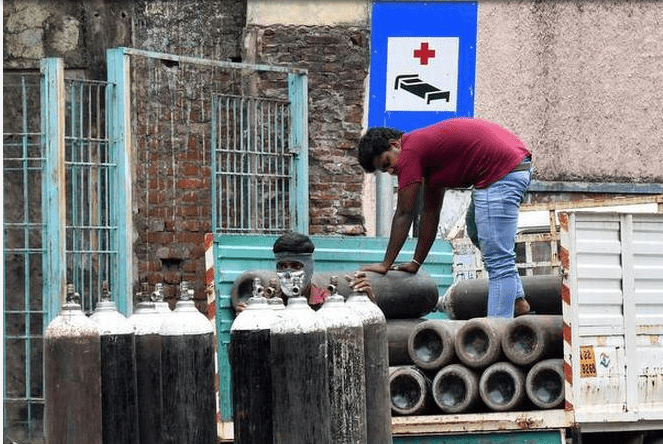 ILNS: Addressing the scarcity of oxygen and the resultant health emergency in the capital, the Delhi High Court on Saturday made it clear that anyone indulging in stopping or hindering the supplies won’t be spared.

“We are not going to spare anyone. We will hang whoever is responsible. Whether junior or senior. Even Centre is strict about it. Criminal action would be initiated as by stopping this they are endangering human lives,” said the division bench of Justices Vipin Sanghi and Rekha Palli.

The remarks came in after Senior Advocate Rahul Mehra appearing for Delhi government informed the bench that local authorities in other states are attempting to stop oxygen tankers bringing oxygen supplies for Delhi.

“Wherever these plants are situated, local officers are sitting there. They are only rationing it at the end and are diverting to their own states,” Mehra told the court.

The court then asked Mehra that definite information has to be stated in this regard to which Mehra responded that he will try to bring this on record in an in-camera proceeding.

Following these submissions, the court made such strong observations. The said observations and submissions came during a special Saturday hearing after Maharaja Agrasen Hospital and Batra Hospital made urgent mentioning before the high court, claiming they have a few hours of oxygen left and hundreds of lives are at risk due to the said crisis.

“My Lords, we are running two hospitals in Delhi  with 306 patients.  We almost ran out of oxygen last night. We must thank Rahul Mehra but we will run out this afternoon. We are discharging patients. We have already discharged. We did beg, borrow in the streets.”

Advocate Aggarwal further said: “We need security cover, as we won’t be able to take any more patients.”

Appearing before the court, Home Ministry Additional Secretary Piyush Goyal apprised the court of the various steps being taken. “Air Force has worked out a plan for Durgapur. Filled up tanks can’t be brought via air. Not aware of other two locations. I believe something is being worked out for other cities including Delhi. No stone is being left unturned,” he submitted.

As the hearing proceeded further, two more hospitals – Jaipur Golden Hospital and Saroj Hospital – joined the proceedings with similar demands. “Yesterday 25 people died because we didn’t have oxygen supply. We are literally gasping for breath. We have already lost lives. Patients are losing lives. We have 30-45 minutes oxygen left,” said Senior Advocate Sachin Dutta appearing for the said hospital.

Dutta also contended before the bench, “If Mehra’s (Delhi govt) house was in order, I would not be in a predicament.”

The court was also informed by Central government officer Sumita Dawra that the vehicles from the Delhi government hadn’t reached the Roorkee plant. “In Roorkee, vehicle didn’t reach from Delhi. Maharashtra is mobilising vehicles and sending them,” Dawra said.

The bench then questioned the Delhi government official present in the hearing regarding what has been done about the tankers.

However, after not getting a satisfactory answer, the bench said, “There seem to be a mechanism gap. Certain steps which you were required to take have not taken place. When other States are doing this, there’s no excuse why you are not.”

Central government officer Dawra further informed that even for arrangement of tankers there exists a body.

To this, Delhi goverment counsel Rahul Mehra said, “Usually suppliers have tankers. Tankers are in factories. Tanks are being captured by local authorities. Air liquid is not providing tankers. Delhi govt, with limited resources, got tankers and is sending them.”

“Please arrange tankers so oxygen can be transported,” the court remarked. Solicitor General Tushar Mehta representing the Central government said, “Once tanker reaches Delhi, wish there is some system to supply to each hospital allocation wise. UP has GPS tag for real-time tracking. Technology is a thing today.”

“We have not faced the problem elsewhere. All States and UTs are arranging on their own way even those who are not industrial states,” the Solicitor General said further.

The court while dictating its order said, “The problems that Delhi continues to face arise primarily on account of the fact that supply of oxygen even at the allocated rate is not taking place. Reasons appear to be several.”

It recorded that so far as Durgapur is concerned, tanks are being filled. Railways are waiting to transport as soon as it is loaded. The court further said that for Rourkela and Kalinga Nagar, Delhi govt has not arranged tanks yet.

The court will now hear the matter next on Monday. It has also asked the Delhi Police that it shall provide adequate security to the hospitals, wherever necessary as many hospitals are running out of oxygen have stopped admitting more patients and discharging many existing ones.