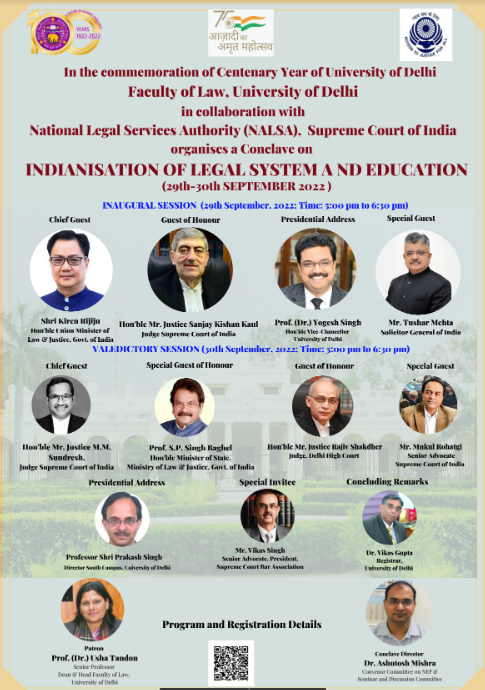 The Faculty of Law, University of Delhi, is organising a conclave on the Indianisation of the Legal System and Education to commemorate the centenary year of the faculty.

To be held in collaboration with the National Legal Services Authority (NALSA), the Supreme Court of India, the two-day conclave will be held on September 29 and 30.

Union Minister of Law and Justice Kiren Rijiju will be the Chief Guest at the inaugural session on September 29. Supreme Court judge Justice Sanjay Kishan Kaul will be the Guest of Honour, Solicitor General Tushar Mehta is the Special Guest, and DU Vice-Chancellor Dr Yogesh Singh will deliver the presidential address.

The two-day conclave’s valedictory will begin at 5 pm on September 30 with Supreme Court judge Justice MM Sundresh as the Chief Guest. Delhi High Court judge Justice Rajiv Shakdher will be the Guest of Honour, Union Minister of State for Law and Justice SP Singh Baghel will be the Special Guest of Honour, and Senior Advocate Mukul Rohatgi is the Special Guest. India Legal is a media partner of the two-day conclave.

The conclave can be attended both online and offline after the registration process. Participants who register for the online sessions will receive links for the sessions through their registered mail ids while for offline sessions, participants need to carry their identity cards for verification.

Participants will be eligible for the E-Certificates after attending all the sessions and filling the feedback forms.

Did you find apk for android? You can find new Free Android Games and apps.
Share
Facebook
Twitter
Pinterest
WhatsApp
Previous articleAllahabad High Court grants bail to man accused of murder in Bareilly district
Next articleSupreme Court shall soon have streaming platform of its own: CJI UU Lalit