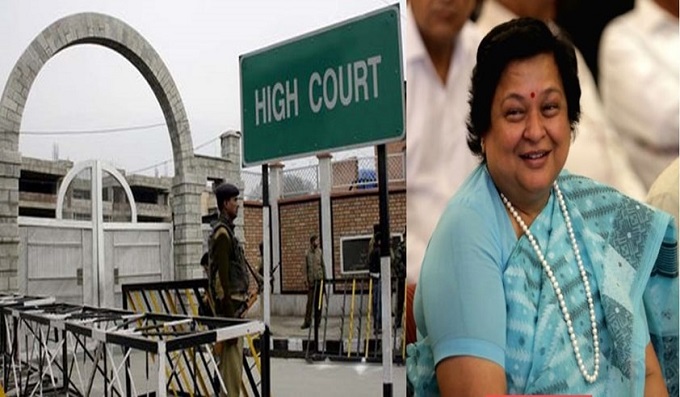 The Jammu and Kashmir High Court has issued a slew of directions to the Union Territory of Jammu and Kashmir and Ladakh to take complete measures of safety and security during the recent lockdown due to the corona virus epidemic while also directing the “Chief Executive Officer, Shri Mata Vaishno Devi Shrine Board and the Deputy Commissioner, Reasi to ensure that 400 pilgrims, who are reportedly stuck at the shrine, are not asked to vacate their current lodgings and their needs are fully provided for till such time as the lockdown persists”.

A bench of Chief Justice Gita Mittal and Justice Sindhu Sharma ordered that all the notifications and directions issued by the Centre and the Government of the UT of J&K are complied with while also directing the institution of a high powered committee to look into the decongesting of the prisons in accordance with the directions passed by the Supreme Court on March 23.

“The High Powered Committee shall ensure that it strictly abides by the directives and mandate of the order of the Supreme Court of India and examines the cases of all prisoners which are to be considered as ordered. In the meantime, let an interim report regarding the functioning of the Committee be placed before us by the Home Secretary, UT of Jammu and Kashmir before the next date of hearing,” the court said.

The bench was hearing a suo moto plea on various issues in the Union Territory of J&K and Ladakh, while hearing grievances from all places in the UTs. It directed the Secretary, Department of Health and Medical Education of both the Union Territories together with the IGP, Jammu, IGP, Kashmir and IGP, Ladakh to ensure that complete safety and security is provided to the personnel who are serving at all government facilities.

“If necessary, the present security should also be beefed up to ensure that no person is able to leave the medical facility till the period of quarantine/isolation is completed. We reiterate our directions to the authorities to take strict action against the persons who are violating any instruction/any order issued by the Central Government and the UT Government as well as any provision of law especially where their conduct would result in the spread of the COVID-19 infection and endanger lives,” it said.

It also ordered all the law enforcing authorities and park owning authorities (all municipal corporations, development authorities) to prevent access to public parks, etc which are normally used for such purposes by the citizens.

“The law enforcing agencies shall strictly ensure the lockdown and prevent any kind of activity which could adversely impact social distancing in any manner,” it said.

During the hearing the bench also said that it had received an email from the office of an advocate complaining of excessive violence by the police and enclosing a video film purported to be of the Jammu area.

However, the court said that it was not possible for them to verify the correctness or the authenticity of the enclosures at this stage and time. However, certainly no excesses or physical violence by the police is permissible or can be countenanced.
It ordered that the representation of the lawyer and the enclosures thereof be forwarded by the Registrar Judicial to the IGP, Jammu for examination for appropriate action.

The matter would be now heard on April 3.

Did you find apk for android? You can find new Free Android Games and apps.
Share
Facebook
Twitter
Pinterest
WhatsApp
Previous articleSC dismisses plea for bail and suspension of sentence on grounds of father’s illness
Next articleKerala HC directs Union Govt to ensure removal of road blockade by Karnataka to allow access to medical aid