The organisation of such events has not only challenged the Supreme Court judgement on the Ram Mandir-Babri Masjid land dispute but also questions the secular nature of Indian Constitution, Advocate Vineet Jindal said in his complaint filed with the Delhi top cop. 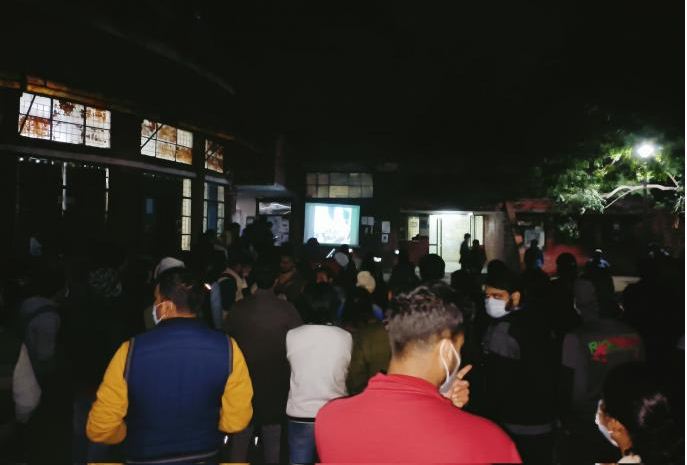 In his complaint, Advocate Vineet Jindal demanded the booking of Ghosh and Moon under Sections 121A, 124 A, 153, 153 A, 298 and 505 of the Indian Penal Code for organising an event of the JNUSU inside the campus demanding the reconstruction of the demolished Babri Masjid in Ayodhya on the evening of December 6, 2021 where slogans like Fir Se Banao Babri were raised.

A show was also organized in the campus on Monday in which Ram Ke Naam, a documentary on the Babri Masjid demolition by acclaimed filmmaker Anand Patwardhan, was shown even after the JNU administration had denied permission for its screening.

The complaint quoted from JNUSU president Aishe Ghosh statement where she had said that after Babri Masjid, the next target of the BJP is Kashi and the BJP has started working on it. In his complaint, the advocate also quoted the JNUSU vice president Saket Moon’s statement in which he had said that Babri Masjid justice will be delivered with its reconstruction.

Jindal said such statements clearly indicate the intention of the organizers. With this protest, the organizers want to provoke and instigate people against the construction of Ram Mandir in Ayodhya after the Supreme Court’s verdict.

The organisation of such events has not only challenged the Supreme Court judgement on the Ram Mandir-Babri Masjid land dispute but also questions the secular nature of Indian Constitution.

The complaint said it further adds fuel to the fire which is about to extinguish with the court’s judgment and its acceptance by the citizens of this country. On one end, it’s instigating the Muslim community against the judgment regarding the reconstruction of Ram Mandir while on the other, it’s provoking equal distress among Hindus, who are looking forward to the reconstruction of the temple after prolonged years of the case pending in various courts, the complaint said.

Such protest and statements have hurt Hindu sentiments and inciting Muslims against the construction of Ram Mandir in Ayodhya and Hindus and are an attempt to create and provoke communal disharmony and national discord among the masses, the complainant said.

Linking the news article in the complaint, Jindal said such events account to an intentional act of creating disturbance among the citizens of the countries and the states, an attempt to wage war among communities and an open condemnation of the judgment of the Supreme Court, which is not acceptable in any manner and must be dealt sternly by lodging an FIR against the organisers of this event.