Judges fill the gap between the enactment of law and ensuring justice is done: Chief Justice DN Patel 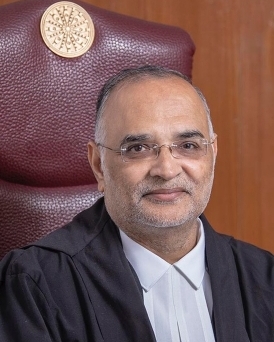 Delhi High Court Chief Justice D.N. Patel on Friday said, “There is always a gap between the justice and law. Merely because a law was enacted, is no guarantee that justice will be done. That is some role to be played by judges and if there is any gap, we just have to fill up that gap and that is known as judicial activism and it is inevitable, but as a matter of exception, not as a matter of role.

“We are not here to make the law not to evolve policy brand name, but we are only interpreter of the law but as an exception that I have said that gap between the law and justice is bound to be judicial activism.”

The outgoing Chief Justice of Delhi High Court said, “I shall ever be grateful to the kind words spoken about me. Abraham Lincoln has one said “the best thing about the future is that it comes one day at a time”. This is the reason we are able to mentally prepare ourselves and plan accordingly.

“For me, the day has arrived when the pages of my life have turned to a new chapter but before this happens, I have this God sent opportunity today to record my journey and thank each one of you and others, who have made a valuable contribution in my professional and personal career. I can say that the last 38 years of my life have helped me in satisfying my unceasing quest to learn the law and serve the justice delivery system.

“As I look back, I am satisfied with my experience.

Judiciary, one of the three primary institutions of the Indian democracy being an adjudicator of the truth, has been bestowed with both constitutional powers and responsibilities in the scheme of Indian constitution.

Judiciary is a unique institution in the grand scheme of the Indian Republic as it does not have the power of sword or controlled by other two primary institutions.

Our primary task is to render the justice through our orders and judgements by deciding places and put into end the leaves in dispute, not only between the individuals but also the institutions and the state authorities. Much have been discussed here and abroad about the judicial activism and judicial restraint. Let us be very clear on this concept.

We are giving several guidelines in several decisions, this is basically depending upon the theory of positivism. We are concerned with the law as it is and not the law as it is ought to be. It is a matter for Parliament and absence of law, it is for the executive to direct the policy as for the bifurcation of power in the Constitution. I have always followed this theory of positivism; Austin, Salmon and exceptionally creativity. One has to maintain the balance between judicial activism and judicial restraint. Does the unique position of the judiciary insure that it parlours with its citizenary and authority through its written word in orders and judgements. Our trust with the Covid-19 pandemic has only confirmed that the life can be very unpredictable. In one way or the other, we all have experience suffering. For me personally the realisation was more of spiritual kind, that no matter whatever background or identity or how much effort we put in controlling our lives, the unpredictability of life is the reality. It is this knowledge of the uncertainty of the life that has brought us closer towards by the play of these times. While we are engulfed in a fear of what is to come, we will learn how to cherish what we already have.
We are here for a purpose and we have to fulfill it with the best of our ability. I would like to mention that in these trying times when rendering assistance to the government itself became a challenge. Article 226 said to be the last option for the citizen in distress, whatever the perception of an outsider, the fact remains that during these trying times, I have observed the monumental efforts made by the individuals working at all the levels of Delhi judiciary, which is worth an encouragement. To quote Martin Luther “A genuine leader is not a searcher of consensus, but a modular of a consensus.” The quality of Bar at Delhi High Court is par- excellence.